Chopin and George Sand in Valldemossa 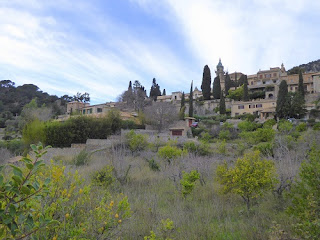 They came here on 15 December 1838 because they'd been kicked out of their lodgings near Palma. News had spread of Chopin's tuberculosis - a condition which Sand, his lover and devoted carer, refused to believe - and when the rains came, water had poured into the sick room. The 14th century charterhouse in Valldemossa had recently been de-monked and turned over to the authorities during the civil war which had left Mallorca in turmoil; it would offer them isolation, peace and a better climate in the Tramuntana mountains. 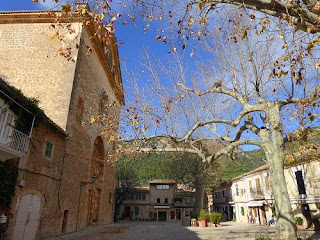 The Mallorcan sojourn was not going so well, and Sand's anti-clerical stance, along with the fact that she dressed herself and her daughter in men's/boys clothes and smoked cigars, alienated them from the local populace. Chopin's worsening condition and the wretched weather meant they left after 59 days in Valldemossa. Sand's account of a very mixed time,  A Winter in Mallorca, has been pilloried for her high-handedness and mockery of the island people, but I love its spirit and energy. Discussing the destroyed Dominican Monastery in Palma, she rails against the horrors of the Inquisition carried out there, and she is scathing about the Catholic cult of Valldemossa's holy girl Catalina Tomás, whose chapel we came across when we walked around the lower town (the plaques marking the stations of the cross around it are on houses in showcase condition, though we saw no-one apart from a couple of old ladies visiting the shrine and a singular cat - see lower down). 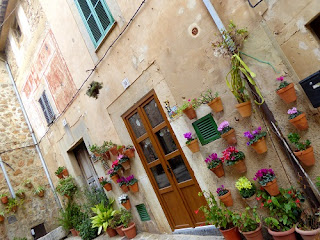 At no time has the Roman Church refused to honour in the Heavenly Kingdom the humblest children of the people, but times have come where she has condemned and rejected those of her apostles who try to improved their existence in this earthly kingdom. The pagesa [peasant girl] Catalina was obedient, poor, chaste and humble; but the Valldemossan pagès have profited so little from her example, and understood so little of her life, that one day they tried to stone my children, for they regarded as desecration the fact that my son was sketching the ruin of the Charterhouse. They behaved exactly like the Church, with one hand they kindled the auto-da-fé pyres, and with the other hand they burned incense before the effigies of her saints.

George's 15-year-old son Maurice has left very flavoursome pictorial documents of that time - there's a reproduction of one in the cell-museum which I hadn't seen before, of Chopin, mama and the children being informed by the Valldemossa priest about the nature of snow (as if we didn't know, Maurice wryly adds). 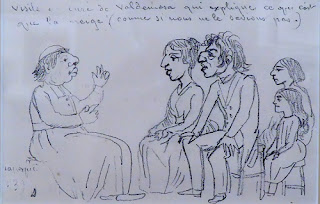 Having read tales of rival claims to 'the Chopin/Sand cell' from the monastery proper and Chopinesque competition, I was dubious about the gaudy claims outside to the 'real' lodgings, for which you have to pay separately. But it seems that 'Celda No. 4' is the right one, and since it had the Pleyel piano shipped from France which arrived rather late in their sojourn there, it had to be seen. And I was glad I took the plunge. What they don't publicise is the beauty of the garden terrace and one of those views which, Sand wrote, 'completely overwhelm one, for it leaves nothing to be desired and nothing to the imagination. All that a poet or painter might dream of, Nature has created here'. 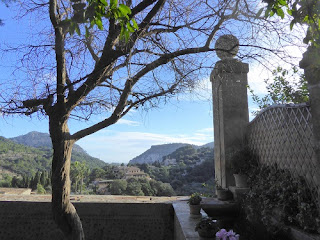 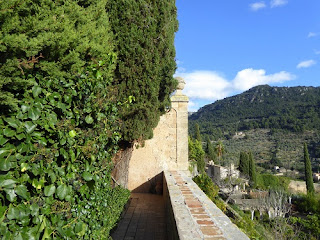 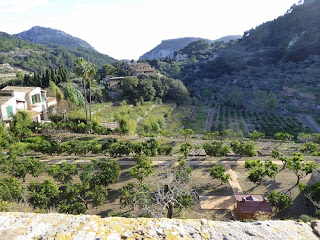 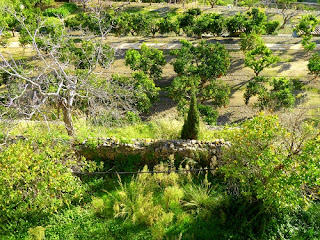 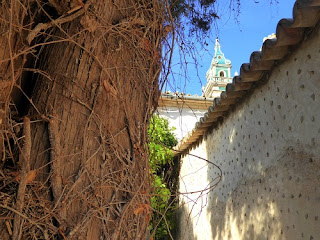 The 'cell' is not as austere as you might imagine, even though Chopin compared his room to a tall, upright coffin with vaulting. Approached - the entrance is along from the cloister gateway - 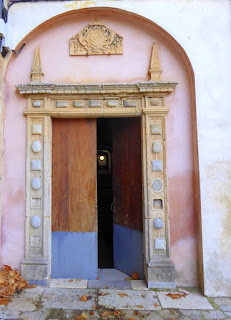 via a lugubrious passageway 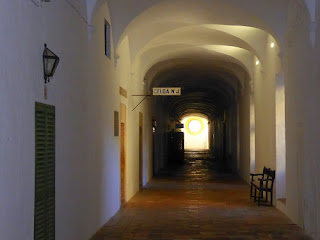 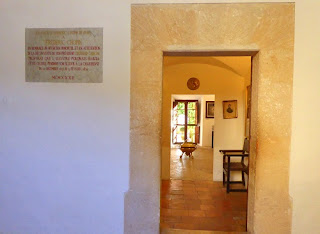 it's a suite of three rooms, all with windows and doors giving out on to the terrace. 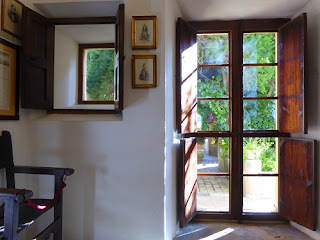 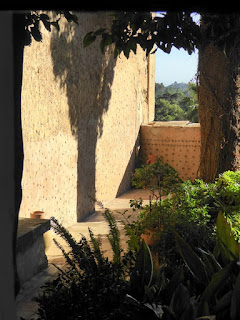 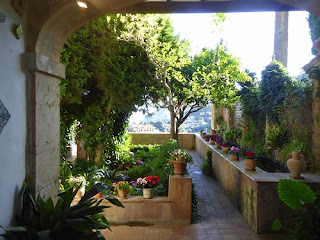 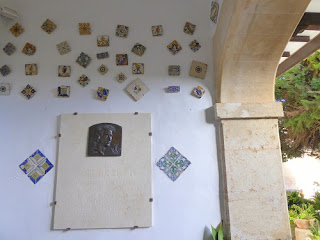 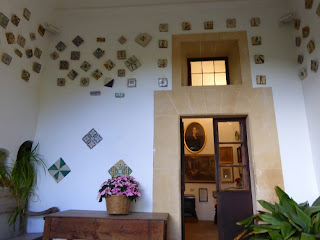 There are facsimiles of Chopin's manuscript for the Preludes and original letters concerning the procurement and delivery of the Pleyel, and yes, there is the piano itself. 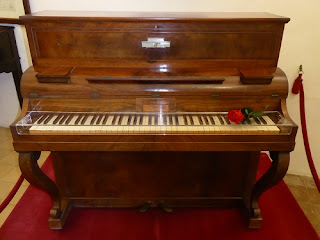 Until it arrived, Chopin allegedly played and composed on a specially constructed Mallorcan pianino, which if Paul Kildea is correct in his recent book on the subject, passed into the hands of Wanda Landowska. What he composed on which piano is never going to be known, but it is certain that some of his darkest inspirations were penned there, spooked as he so seriously was by his surroundings: the central juggernaut of  the D flat major Prelude, nicknamed "Raindrop" because of its incessant A flats turning into G sharps in the middle section; the wild outburst which shatters the trotting composure of the F minor Ballade; and the C sharp minor Scherzo.


We got to Valldemossa in little more than half an hour on a morning bus from Palma. Our host at the Bar-Ristorante es Roquessar in the main square told us that the week before Christmas was unnaturally quiet this year, and that there was no point in staying open of an evening. This was the equal-first-best meal we had in Mallorca - alongside those in our Palma regular, l' ambigú - and we spent longer than planned just sitting watching the sporadic activity in the square (a kid playing delightedly with the leaves dancing in the wind, a couple that swept through photographing everything, an ugly and persistent cat with a very odd meow). Mostly, though, it was deserted. This is the view across to the restaurant from the entrance to the cell-museum. 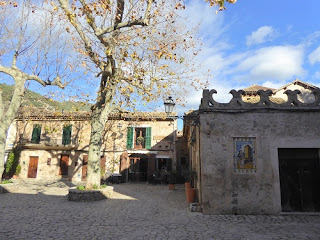 J wasn't going to see the cell, but once I'd been I insisted he did, which gave me another 20 minutes sitting in the late afternoon sun.

After that we wandered down to the lower part of town, 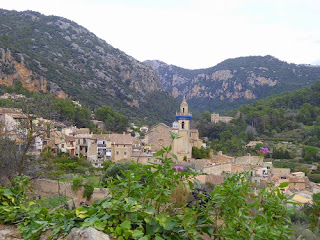 conversed with a very leonine cat by the chapel to Catalina. 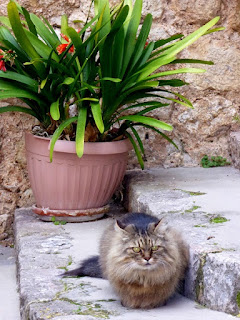 peered down various alleys giving views to the verdant hills beyond 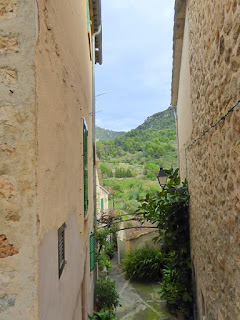 and I took a bigger loop around because I wanted to see the monastery terraces from below (hence the lead picture here). The next day was marked out for Deia, 20 minutes further on by bus, and that offered wonders of another sort, to be chronicled anon.
Posted by David at 11:53

Every aspect of this post is delicious, all a part of the world to which we’ve not been, so the photos are much appreciated, and the historical backdrop, particularly Maurice’s drawing and the passage from Sand you quote, really bring the place and its notable occupants to life. I look forward to further installments from your trip.

Meanwhile, have been thinking of you while reading Bassani’s Novel of Ferrara and wondering whether you may have read it (just translated into English in 2018, I believe). It, too, is infused with a powerful sense of time and place, and of course is a sprawling saga—really a stitched together set of his novels and short stories, though I think reworked a bit to make the whole. On reading the novel (I have a long way to go yet), I was not surprised it was Bassani who knew enough, alone among his publishing house peers, I gather, to bring Lampedusa’s The Leopard to publication.

I didn't know about The Novel of Ferrara, though I read The Garden of the Finzi-Continis many years ago. So I must.

Now, we must fix you and J up with Sophie's (and now our) consul friend who owns the Palma apartment with her two sisters. You'd love Mallorca - so many beauties all within effortless reach of Palma's gorgeous city centre.

Well, I can only say that's a very tempting thought and, once we have got to the other side of selling our house (this will probably take until late 2020), I may well reach out to you! It is daunting how much stuff we have accumulated--and we are not "thing" people at all. We have certainly made a big dent, but have oh, so far to go!

It is worth, in choosing a version of Visconti's film of The Leopard, to get the Italian version ( with or without sub-titles). Although this point is not of great weight, one does get the atmosphere better in Italian. And as Susan says, Bassani is to be commended, especially as bringing the novel to publication proved to be so onerous ( various versions appearing etc)

More off-piste than ever, Sir David. And in one respect, I don't agree; the dubbed voices are awful (why did Italians always do this, even for their native actors? Some Fellini is ruined too). Burt Lancaster SOUNDS like the hero; his voiceover doesn't. Unfortunately the American-language version was grievously cut. But in any case I would insist that anyone interested reads the novel, to which the film doesn't really come close.

Now, anyone for Chopin and Mallorca rather than Lampedusa and Sicily?

I had no idea it was still so rural. I'd sort of imagined giant hotels everywhere but it looks lovely. I'm with Georges Sand on the olives, was going to say my favourite pictures were those twisty trunks with misty mountains behind. And very impressive drawing for 15 year old - or anyone.

The giant hotels are in small pockets along the coast, a disastrous legacy of Franco's later years, but the Serra de Tramuntana is UNESCO world heritage-protected. I don't know how much that was to do with Robert Graves (see the Deia piece), but it ensures that the unique mountain landscape, cultivated or not, won't change much.

Thank you, David, for this fascinating account. I feel like an absolute philistine, having been to Palma de Majorca recently and not having been organised enough to visit Valdemossa... Next time I'll get up earlier to have my practising done and out of the way in the morning!

Totally agree re Italians ruining movies with dubbing, but alas the idiotic tradition of dubbing foreign films is also still upheld in Russia, France and Germany... Interestingly, Fellini himself preferred re-recording all the speech and dubbing his own movies for some reason. And when actors asked what they should say while acting the scene, he would say: anything you want, you can just count: 1, 2, 3, 4, etc. A huge fan of Fellini as I am, I find this part of his aesthetic bizarre.

Good to hear from you, Rustem, and yes, I always found that aspect of Fellini's films odd. I had no idea that the actors made up the lines in the actual scenes, though.