Weill in the 1930s: Silver Lake and Deadly Sins 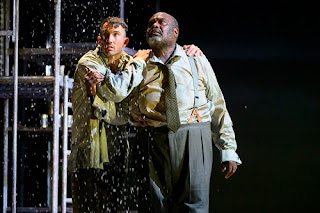 In a departure from the usual format for my Opera in Depth terms at Pushkin House - two operas over ten Monday afternoons, one in the case of the major Wagners - I split the autumn three ways, and revelled in each work, despite preliminary misgivings. So we had four Mondays on Handel's Agrippina, four on Gluck's Orfeo ed Euridice - and two on Weill's Der Silbersee (The Silver Lake), to link with English Touring Opera's valiant production - musically excellent, production wise not so much; but in any case only two students went.... (Pictured above: David Webb as Severin and Ronald Samm as Olim in the ETO production, image by Richard Hubert Smith)

Despite that, we all had a vital time with Weill; I often forget how close he is to my heart, not least because of the happy time spent under Dr Roger Savage's direction in the Edinburgh University Opera Club's triple bill  of The Lindbergh Flight, The Yea-sayer, in which I was one of the trio of students, and The Seven Deadly Sins in the Auden/Kallman translation, in which I played Pop to basso profundo Adrian Johnson's Mom. Our 'sons' were tenors Bill Anderson and Matthew Lloyd. Here we are mulling over the designs for our 'little house in Louisiana', gradually assembled piece by piece as daughter Anna sends home money, having subdued each of the 'sins' in the eyes of the capitalistic bourgeoisie, otherwise human virtues. 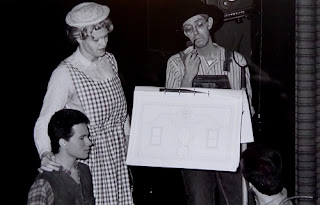 Since I just dredged up these pictures, here's a tableau from the penultimate, 'Avarice', scene. Liz Harley was our Anna I, a dancer called Viv (whose surname I'm afraid I forget) Anna II. 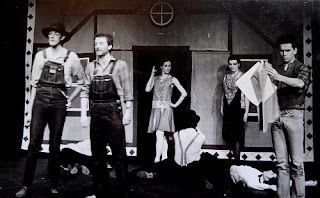 The more I listen to Seven Deadlies, as we called it then, the more I'm convinced it's Weill's most perfect score - and possibly Brecht's most succinct and ingenious text with him, though the Mahagonny myth is one of the latter's great and timeless creations. Now that we see how the love of money and power still dictates all, the less we are likely to see Brecht/Weill as just a Zeitgeisty thing (of then, I mean, but maybe the 1930s are rhyming with the 2010s/20s, if not replaying in detail). 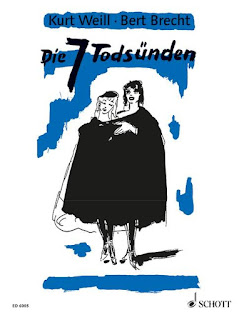 All the aspects of 7DS are there in Weill's music for Georg Kaiser's play The Silver Lake: A Winter's Tale (allegedly very long indeed, the spoken text much cut for ETO), and musically there isn't a duff number. The dry, bleached choral writing for 's monologue, in which he decides to help the robber he shot, if only he had money (a Lottery Agent obliges), is fine in place, but it kills the opera Der Burgschaft stone dead; I listened to the first act on CD, and couldn't go on. Whereas the music of The Silver Lake couldn't have a more lively argument than it gets from Markus Stenz, the London Sinfonietta and a top notch cast on this recording. 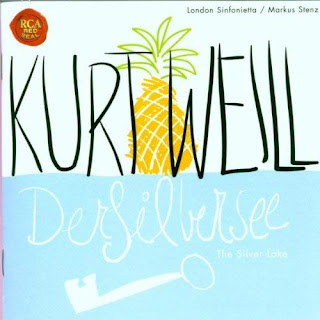 The technique in Sins and Silver Lake, though, is to keep the hit song style alive in alternation with the 'serious' side of Weill as Busoni's pupil; he may have made the same mistake in thinking Die Burgschaft the best of him as Sullivan did in wanting to write 'serious' opera when his collaborations with Gilbert were sheer perfection. Not that Silbersee is without its serious side. Nor is it just an historical curiosity, the last flourish of what would become labelled by the Nazis 'Entartete Musik,' 'degenerate music'. Famously, since Hitler had become Chancellor of Germany at the end of Germany, Berlin was considered too risky as a location so simultaneous premieres took place on 8 February 1933 in Leipzig, Magdeburg and Erfurt; the second Magdeburg performance was disrupted by Nazi supporters. The rest is horrible history, starting with the Reichstag fire on 27 February. Weill fled Berlin less than a month later, and landed in Paris, where, reunited with Brecht, he worked on his 'ballet chanté' Die sieben Todsünden (to give SDS its hybrid title - the text was first performed in German), before moving on to America with Lotte Lenya in 1935. 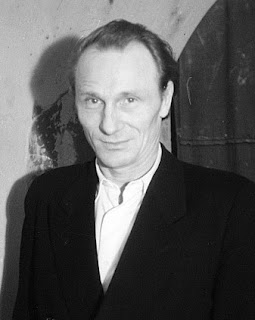 There is a remarkable Silbersee document of the highest artistic quality: Ernst Busch (pictured above later, in the 1940s), who created the role of Severin, the hungry man who steals a pineapple, in Magdeburg, recorded two songs with the full orchestration conducted by Maurice de Abravanel, in advance of the premiere; they were the last to be made of Weill's music in Germany for many years. Both are on YouTube but seemingly not embeddable, so I'll provide links instead. The A side is a march-like protest song from early in Act One, 'Der Bäcker backt ums Morgenrot' , while on the B-side Busch steps in for the roles of greedy Baron Laur and Frau von Luber in the 'Totentanz' (Dance of Death) that turns into 'Das Lied von Schlaraffenland'.

In the first class, I set the scene for Der Silbersee, starting with the 'Tango Angèle', the first 78rpm gramophone record of specially-composed music to be incorporated into an opera, the one act comedy with Kaiser Der Zar lässt sich photographieren (The Tsar Has His Photograph Taken), recorded in 1928, then taking an oblique look at some of the intervening hits. In the second class, lacking any DVD of Der Silbersee, I first of all found all the corresponding styles in Seven Deadly Sins in snippet form and placed them alongside their Silbesee parallels, before screening Laurent Pelly's perhaps over-joky but never boring production in collaboration with choreographer Laura Scozzi for the Paris Opera and Ballet; Anne Sofie von Otter is so good in this, though I'm afraid there are no subtitles.


In four days' time, we're back at Pushkin House with 2020's Wagner Ring instalment - ten Monday afternoons on Siegfried. Here's the flyer; if you think you might be interested in joining, click to enlarge and absorb the details. 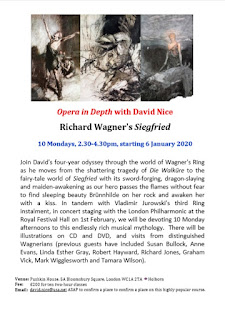 The Seven Deadly Sins is pretty close to top of the bucket list of works that I've never heard live, and despair of ever hearing live. Salonen is conducting it with the LA Phil next month, in a great program (with Hindemith & more KW/BB), but I don't think that I can justify the carbon footprint to go out there. No idea if this is on Stephane Deneve's list for STL, but I intuitively doubt it.

It's always been quite popular here, but usually in concert; I haven't seen a decent staging. Deneve loves his Poulenc, and this isn't that big a leap, so maybe there's hope. Salonen's Weimar Republic concerts here were superb, and made the case for MUCH more Hindemith, a very marginalised figure these days.

I’m so uninformed I had no idea these operas existed. I wish NYC, when it comes to opera, weren’t so hidebound, so there might be some chance of live performances. The Met and the Phil missed a big opportunity in failing to engage Salonen (though as he is a wise fellow, he probably preferred to head back west anyway).

Well, at least the Met is still putting on Wozzeck, which, though we in Europe think of it as a repertoire staple, must comes a shock to the comfort-zoners of Manhattan...That place must be a poisoned chalice. Is Yannick's natural charm immune to all the pitfalls, I wonder? He is such an inspiring and wonderful person, I really wouldn't have associated him with a nest of vipers. Now, sit down with J and, having read the English translation, watch the Seven Deadlies with Anne Sophie in it...