Crossing the Tramuntana to Deià 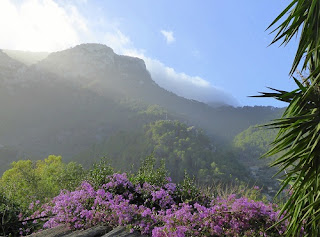 Both names have such a magical ring about them, as of remote places, but Valldemossa in the Sierra de Tramuntana can be reached in half an hour by bus from the wonderful city of Palma, and Deià in 50 minutes. I'm glad we devoted one full afternoon to Valldemossa - covered here - and the next to Deià, for both need savouring (and for longer, in fact, than we had -we even thought we could live there for part of the year). I'm sure that in the summer these places become unbearable, but they were almost eerily quiet on the winter solstice days.

Had not intended to visit Robert Graves's home here, and could not in any case because it was closed, with elusive opening hours throughout the winter, but I did go straight back to the glossy bookshop in Palma's Gran Hotel and pick up the copy I'd seen of William Graves's Wild Olives. Plainly but clearly written, it leaves us in no doubt that growing up in Deià with locals for friends was bliss, that the fascination with this enclosed demi-paradise remained lifelong (though family complications and upsets soon multiplied). 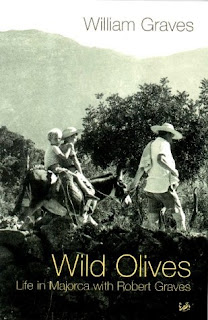 It also reminds us that the unspoilt area owes much, if not everything, to the poet's intervention. Somewhat paradoxical, since in the 1920s his partner Laura Riding had planned for a university to be built above the unique cove, the Cala, development prevented by a landslide, and that Graves himself had thought of letting the land be built on at various stages. But there it sill is, this miraculous small harbour reached by a path and a road through a ravine, with nothing down there open on the shortest day of the year when we visited. 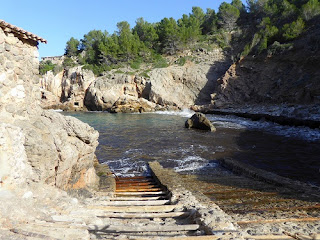 My original plan had been to walk up over the mountain from Valdemossa via es Caragoli at 945 metres and down the steeper side - which the very friendly owner of the Bar-ristorante es Roquissar i that lovely town's main square said he thought was still the best of the many he'd done in the Tramuntana - but J's torn hamstring prevented; he was brave to join me in the walk down one side of the valley to the Cala from Deià and back up the other. Even so, the change of light and atmosphere as we descended from the high plains around Valldemossa to the seaward side was spectacular - clouds and mists were still rolling around at that time in the morning. And the sun only just stayed above the rockface of the Teix beyond Deià, casting sharp angles of light and shadow both at the time of our arrival 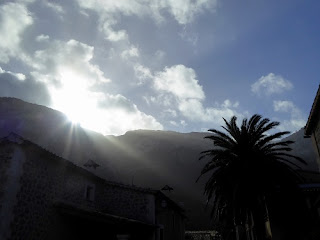 and as we waited for the bus back, when the sun was about to retreat behind the mountain. 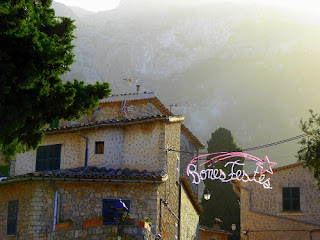 We couldn't quite work out the centre of the village at first; the few fellow tourists who got off the bus with us dispersed, and there was no-one, seemingly nothing open. We made our way up es Puig, the hill in the southern part of Deià, to the church, past the plaques marking the stations of the cross which William Graves mentions in his description of one memorable Easter. A few well-dressed folk were chatting inside the church after the Sunday service. Its interior, originally from 1497 but much rebuilt after a fire in the mid-18th century, has a much-loved feel about it. Its nominal saint, John the Baptist, has a special chapel with a curious font and a not unpleasing 19th century painting on its apse. 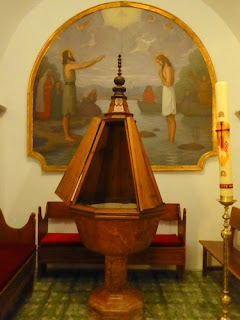 Never seen a crucified Christ in a skirt before. 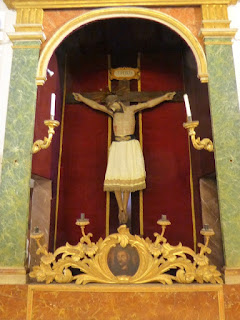 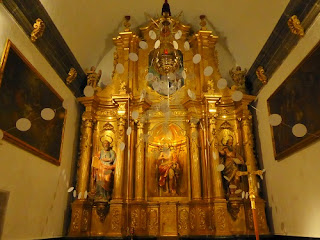 and the crib here had been assembled with much love, and a kind of post-Impressionist representation of the Serra de Tramuntana behind it. 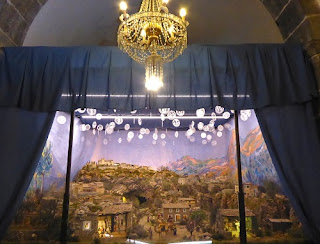 Robert Graves has a simple stone in the graveyard, naming him simply as 'poeta', 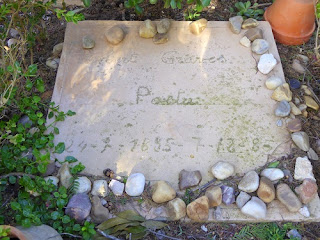 and the cemetery gives Deià inhabitants the best views in the entire place. 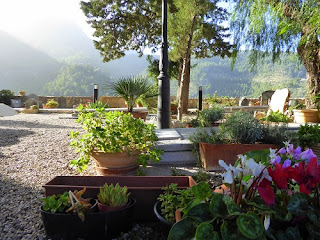 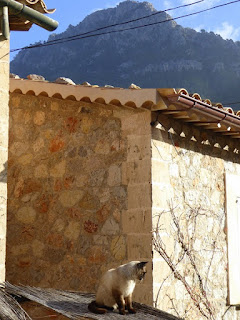 to find a path through the olive groves down to the Cala.What infinite fascination and variety there is in the forms of the olive. I'll revert to George Sand in A Winter in Majorca:

The forceful yet bizarre shapes of these olive trees, these Majorcan foster-fathers, are unequalled. The islanders swear that no olive plantation is more recent than the time of the Romans. Even if I wished to, I cannot dispute this, for I have no way of proving the contrary. After one look at their daunting appearance, the incredible size and frenzied attitudes of these mysterious trees, my imagination voluntarily accepted them as contemporaries of Hannibal. 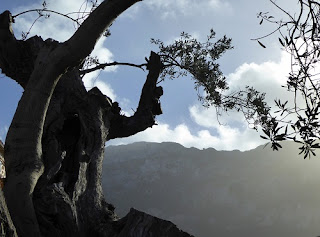 In the evening, when walking in their shade, you have to remind yourself that they are trees; for if you believe your imagination and what your eyes see, you would be terror-stricken by these fantastic monsters, some bending over towards you like enormous dragons, with gaping jaws and wings outspread; others coiled up on themselves like boa-constrictors; others, like giant wrestlers, locked together in furious combat. Here, a galloping centaur carrying a hideous monkey on his rump; there some nameless reptile devouring a panting doe; further on, a satyr dancing with a he-goat a little uglier than himself; and often a single tree, split, gnarled, twisted and deformed, which you mistake for a group of ten different trees, passes off as all these different monsters and unites once again to form a single head, as horrible as an Indian fetish, crested with a single green branch... 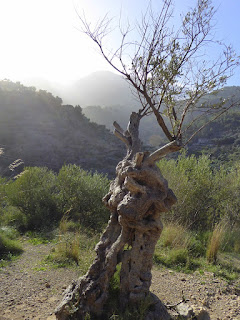 In order to convey the splendour of these sacred trees, from which one expects to hear the sounds of prophetic voices, and the glittering sky against which their sharp silhouettes are drawn, nothing less than Rousseau's bold and impressive brushstrokes are needed.

Brief pausa with an oak in the foreground now, olive trees only distant here. 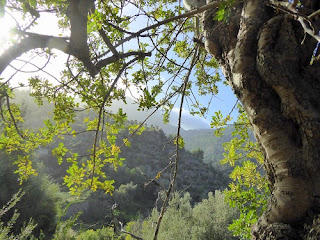 Let's also not forget the lines from Graves's poem 'The Oleaster', quoted as epigraph to his son's memoir:


No, here they never plant the sweet olive
As some do (bedding slips in a prepared trench),
But graft it on the club of Hercules
The savage, inexpugnable oleaster
Whose roots and bole bunching from limestone crannies
Spout impudent shoots born only to be lopped
Spring after Spring. 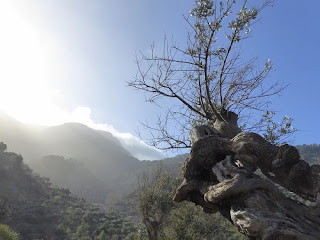 Plentiful bees and butterflies flanked our route, until we joined the traffic-free road 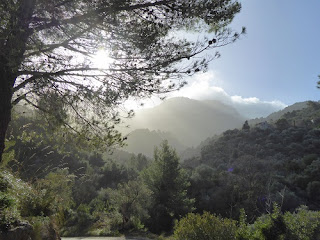 down through the narrower rocky defile to the harbour, following the stream which eventually comes out alongside the resting boats. 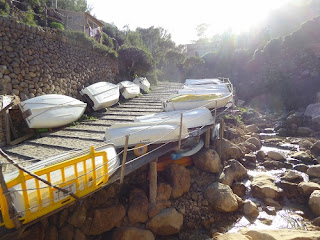 I'd brought my bathing trunks, but the sea was too swelly and splashy 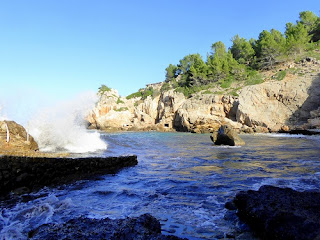 so we sat in the sun on the terrace of the now-closed cafe-restaurant for half on hour, looking down on the bay and south-west to more pine-capped cliffs 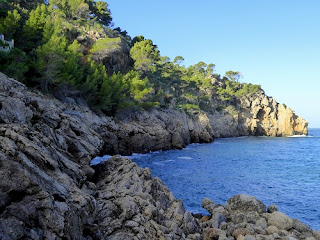 before walking back up to the lunch we'd hoped to find here. I took an alternative route to the right, passing donkeys on the loose and passing a father and daughter who were out walking with a baby lamb, which they were helping over a stile. Other views opened up here, of the olive terraces below the church 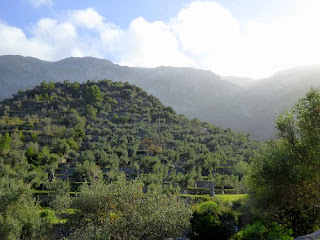 and beyond, the Puig des Teix 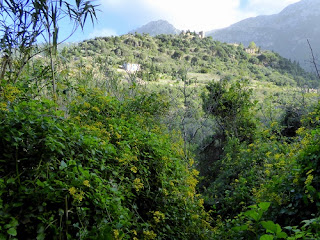 which was also framed helpfully by lemon trees back in town. 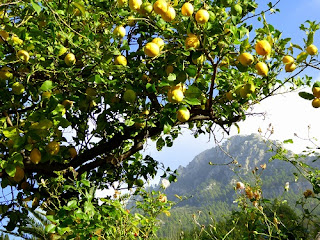 I came back via the main drag, where there were several cafes and restaurants open, but J failed to materialise; he had reached Graves's house, Ca N'Alluny, and thought he was already in town, so another half hour of precious lunching time passed. When he appeared, we bought the most sensational slices of spinached bread and sandwiches from the local store - full of wonderful things - and sat on the wall outside in the last of the late afternoon sun, witnessing the formation of huge numbers of seabirds which I've pictured here already - another shot won't do any harm - 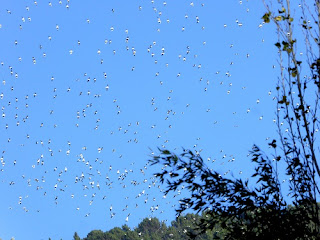 before catching the bus back to Palma, and a last sunset on the stupendous cathedral. But the wonders of the old town are for another post.
Posted by David at 17:15

Another glorious post on a clearly glorious place. Your photographs of olive trees splendidly illustrate the George Sand meditation, and your closing words offer the most delectable (literally and figuratively) of images: "the most sensational slices of spinached bread and sandwiches from the local store - full of wonderful things - and sat on the wall outside in the last of the late afternoon sun." Thank you so much for taking us to this magical place.

It seemed magical to me even at the time, and how much more so when revisited on a cold, wet late January day in London. You two know that I can't recommend our lodgings too highly. Once you get to Mallorca, everything works - distances aren't huge and the transport is good.

Do you think it possible that the ( added? ) skirt on the figure of Christ om the cross was because he was naked? Sometimes Victorians would put skirts around piano legs as they looked too human, and rude.

I assumed that, yes.