Into the woods with Wagner's Siegfried 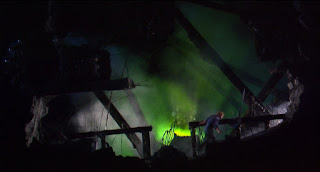 Perhaps I should more accurately have put 'flying through the forest', since the first four Mondays of my Opera in Depth class kept us buoyant in unpromising times. There's so much wit and spirit about young Siegfried's rapport with his scheming foster-father Mime, such galvanising energy about the forging scene, that it was hard to be downcast by dismal circumstances leading up the 31st (and including it; more of what I did on the day anon).

Such are the insane demands on the Heldentenor singing the most taxing role in the rep - Stuart Skelton, talking to me for the Wagner Society, said it was tougher than Tristan, and he'll never take it on - that I've only seen two Siegfrieds live who both lasted that act and looked goodish (in one case) and close to perfect (in the other): Siegfried Jerusalem in the Kupfer production for Bayreuth (image from Act 2 up top), and more recently Stefan Vinke at the Royal Opera, not the loveliest voice but the only other hero to make us leave the auditorium in the interval spinning with exhilaration. Fine actor too. 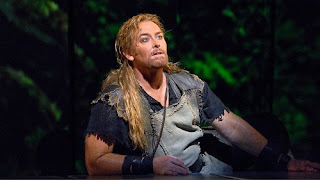 To guide the class, I've had none but the best for company. Delighted to find that Jay Hunter Morris (pictured above in the first of two Metropolitan Opera photos by Ken Howard) looks and sounds the part, though Robert Lepage's Met production doesn't really have enough Personenregie infill; it seems to rely on the dramatic intelligence of Hunter Morris and his Mime, Gerhard Siegel (also a Siegfried of yore, Vinke told me at another Wagner Soc talk). 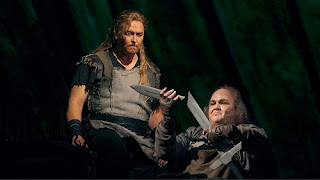 Good to have a video-suggested forest and running water, too, but the ineptness of the lighting (too many follow-spots, video strips on faces) lets it down.

Even so, I'll be returning to the Met DVD for the middle of Act 2. After we'd eased in with Hunter Morris and Siegel, I reverted to the Chéreau Ring for the meetings of Donald McIntyre with Heinz Zednik's Mime and Hermann Becht's Alberich (the Licht- and Schwarz-Alberich similarities are brilliantly realised here, as they were in Richard Jones's Royal Opera Ring). The Forging Scene could only be Jerusalem's with Graham Clark's acrobatic Mime - we took the Kupfer production's Act 1 from the second part of the riddle scene (John Tomlinson's Wanderer superb, of course) to the end of the act, where Barenboim takes the last stretch at such a lick, Clark vocally and Jerusalem tapping-wise just keeping up with him. Terrible shame this clip doesn't go to the end, but you see how infilled the production is.


For soundclip excerpts, I was spoiled for choice: Remedios, Dempsey and above all godlike Norman Bailey on the ENO English-language Ring, now on Chandos; 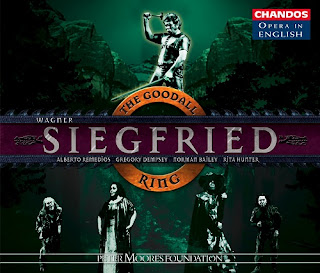 bits of Melchior on various recordings; 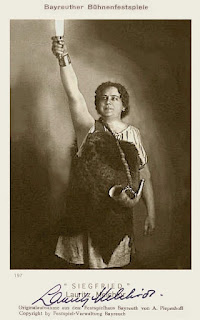 Suthaus and Patzak for the sake of Furtwängler's Rome conducting; Domingo amazingly good in an excerpts disc with Pappano conducting the Royal Opera Orchestra (he's best in Siegfried anyway, I think); Hotter with Clemens Krauss, Bayreuth, 1953; for Act 2 Scene 1, Thomas Stewart and Zoltan Kelemen with Karajan and the Berlin Phil. 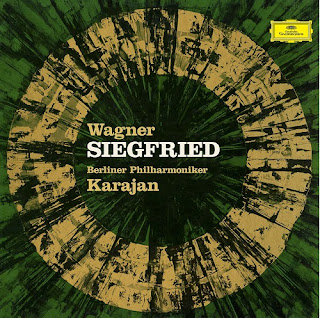 That took up the second half of Monday's class. In the first, we had a visit from the wonderful Tom Eisner. long-serving (30 plus years) first violinist in the London Philharmonic Orchestra, whom I know through his wife Jessica Duchen. Unusually curious for an orchestral musician (though the ones who came to talk at my BBC Symphony Orchestra course were, too), he has long rehearsal break chats with Vladimir Jurowski, who can talk about everything under the sun except sport (not a problem for either of us). There were four full days of rehearsals for Siegfried, and it showed right from the start - see my review for The Arts Desk - and when they embark on the full Ring in January, there will be three rehearsals before Xmas and then two weeks. Here's Tom at the class, happy to show the message on the back of his mobile while I flourish the Dover score of Siegfried. 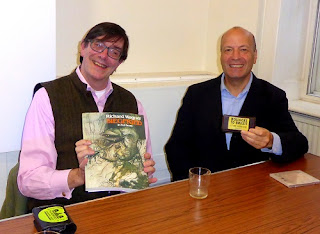 We know that Jurowski is a phenomenal preparer, and also that he likes to place his players carefully. There was nearly a riot some years back when he wanted the double basses centre back, continental style, but they now prefer it. For Siegfried there were many extra players, making the numbers up, for instance, to sixteen first and sixteen second violins as Wagner stipulates, but Jurowski wanted only 12 each to play much of the score. It was, of course, a concert highlight to have superlative new guest principal horn Nicolas Mooney step forward to shake hands with Kerl's Siegfried and embark on his magnificent solo. Tom had hoped to bring him along on Monday for a reprise, but he was off to Belgium. 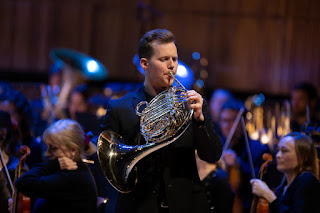 Needless to say it was the lazier players who asked to be on the back two desks...not Tom, of course. He said that the violas have it tougher than the violins, but it's still an endurance test, the toughest bits being Siegfried's outbursts over the sleeping Brunnhilde ('Das ist kein Mann', etc). Gossip about the singers was interesting but not repeatable here (he liked them all but was scared of one). The full works next January/Feb will be phenomenal, though we hope for some cast changes. Not, certainly, Adrian Thompson's Mime, Robert Hayward's Alberich or Elena Pankratova, tackling Brünnhilde for the first time. Here she is with Jurowski, Kerl and the players in the second of Simon Jay Price's two images reproduced here (there were so many to choose from). 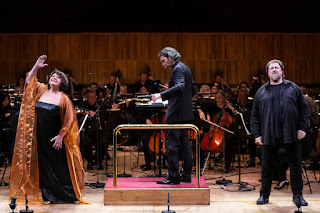 Meanwhile we'll have ENO Siegfried Richard Berkeley-Steele coming to talk the Monday after next, and I'm working on two illustrious possibilities, about whom it would be precipitate to speculate. Then in the summer term, on to Elektra and Madama Butterfly. I hope the members of the Wagner Society who'v taken my class numbers up to 36 will stay on...
Posted by David at 11:35

Now that's one I don't know. I remember buying the Janowski Rheingold on Eurodisc - where is it now? - and hearing a bit of the Walküre, and missing some of the excitement on the Boulez, which dominated sound and vision at the time. Maybe I should go back, though we're past Mime now. I was wondering where I might find Kollo. Would have thought Siegfried might be a stretch too far from him, but this was a studio recording, wasn't it?

Yes, a studio recording, I think made in the early 80s. He did sing it on stage too, numerous times. In any case, his "Forest Murmers" in Act Two are very beautiful, lieder-like in detail and I think the most musically precise I've heard! Janowski creates a beautiful atmosphere too I think.