Saluting the European Commission on 31 January 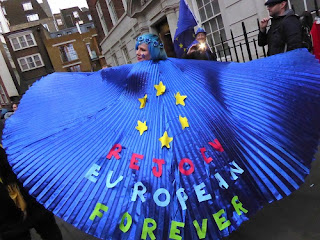 We were warned: skip the processional bit down Whitehall and past Parliament Square, and just go straight to Smith Square; the English Defence League is out in force to 'celebrate' Brexit Day. Not to be intimidated, a smallish crowd (maybe 200?) of REUniters - as I suggest we call ourselves - gathered as instructed opposite Downing Street between 2.30 and 3pm on the afternoon of the inauspicious day, ready to thank the European Commission Representation in London for all it had done over the years. 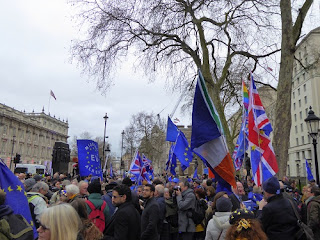 Organiser Peter French later told me that even he, the veteran campaigner and the man behind this splendid float on our last March of the Million, which you can see properly sideways on in that post but more obliquely from behind here, 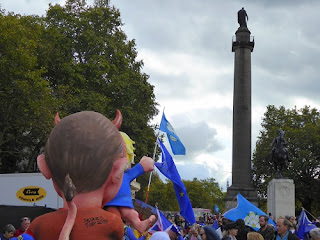 was worried, and thought about abandoning the first bit. But I'm glad to have gone through the fire. The EDF horrors were parallel to us, separated only by a handful of police, megaphoning their hate, and some darted in between us yelling obscenities in our faces. But thanks to Orpheus Henrik Tideman with his zither, 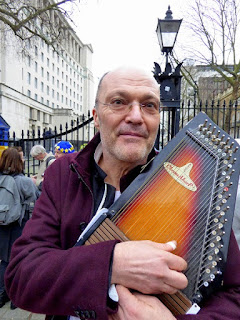 we sang the Ode to Joy over and over, ever louder, and saw them back off bewildered. So grateful to the friends who did come - Henrik, Henrietta Foster, Claudia and Stephen Pritchard (Claudia stylish as ever in her EU wear), Sophie glamorous in black centre. 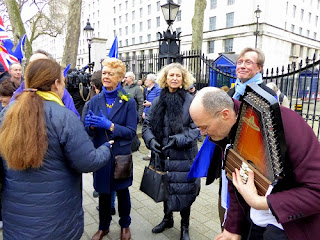 One good thing: there were possibly as many international radio and TV media folk as us. We all got collared to talk at one point or another. I was asked by an English lady representing ORF if I didn't think we were being provocative. And I said that we were offering no provocation at all, just wanting to honour an honourable institution, and that provocation was coming from the other side; we would not rise to it. Also made the acquaintance of til-then-MEP Julie Ward, who sported one of the scarves we saw them wearing proudly in Brussels. Once past the Houses of Parliament, we lost the trolls and all proceeded as normal towards St John's and the European Commission in Smith Square. 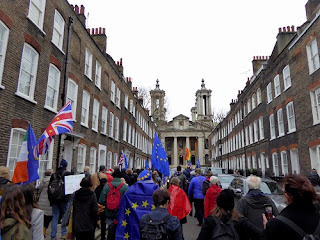 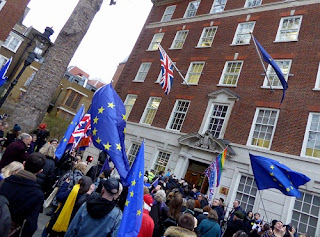 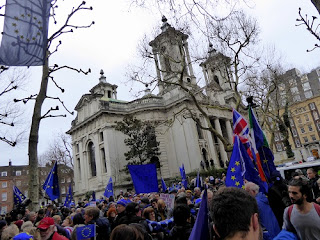 It's a shame no MPs were in evidence - the partner of one said he'd been too afraid to come and had stayed home. Really. But we did get splendid speeches from Peter 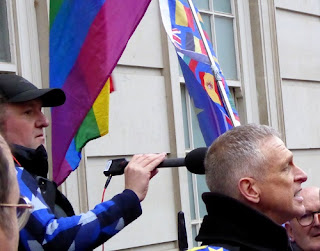 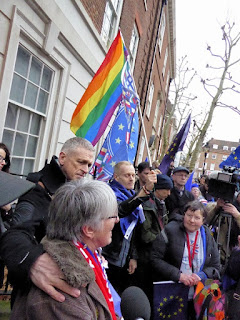 They came in the nick of time, as we were wondering how many more times we'd have to infill by interlacing the Ode to Joy with 'Auld Lang Syne' , which we were briefly seen delivering on Channel 4 News (Latvian friend Kristaps contacted me to say he'd seen it - that is definitely not me on the right, contrary to some unkind friends who suggested there was a resemblance, but we are to be seen at 5m02s),


Fortunately that wasn't the point at which we were railroaded into singing it to some really not very good words, lambasting Parliament inter alia when we know that the House as a whole saved us so many times before the blow of the Toron majority fell and along with it a darkness we must shine light on at every possible opportunity (though it seems that the Prime Monster and his Chamber of Horrors are doing a pretty good job of shooting themselves in their unsteady feet at every opportunity).  Still, Orpheus Tideman was definitely the hero 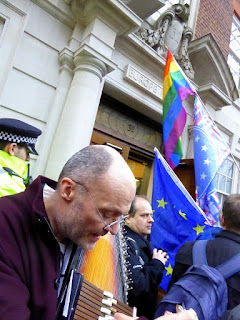 until along came Madeleina Kay, #EUsupergirl and Young European of the Year 2018, whom I'd long wanted to meet. That's her cape up top, and here she is both singing her own composition, which we were able to participate in, 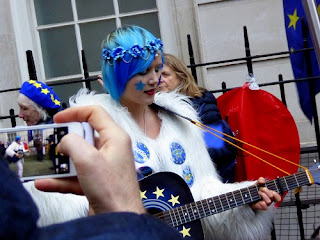 and with the cape behind her. 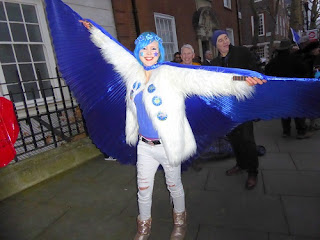 Not sure where she'd come from, but out of one of two Minis emblazoned with 'Bollocks to Brexit' stepped my old sparring partner on LinkedIn Peter Cook, who launched into some very amusing Chaz-and-Dave style numbers, the only drawback being that they weren't quite current, since Mrs Mayhem was very much a target. But a bit of nostalgia was welcome in the mix; this was a broad Remain church, serving up a varied divertissement (that word is French, pace W S Gilbert). 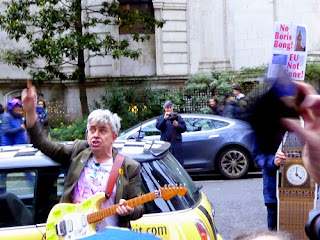 There was also an unfathomable kind of performance artist playing the widow bereft of Europe. 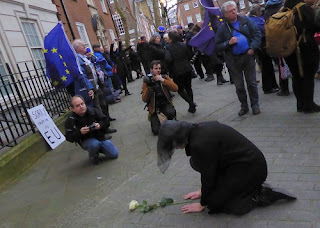 She wandered off as we continued to chat to some nice people from Maidenhead and a couple who were preparing for a candlelit vigil. Otherwise, folk had melted away as the grey declined into sombre night, and I went off with Hen for a plate of dependably generous pasta at Sapori round the corner.

The evening was consoling too: with J hosting a farewell dinner for a work colleague at the Garrick, I went off to bask in the always fabulous Stockwell hospitality of Katharina Bielenberg and Jamie Bulloch, hosting a relaxed gathering (with superb food as always) for Timur Vermes, whose latest novel, The Hungry and the Fat, Jamie has just translated from the German (confession: his book about Hitler returning, Look Who's Back, hasn't stayed with me). Speeches were given by Christopher MacLehose, Katharina's boss at that great press, and Timur, shortly before 11pm, and as I stepped out it seemed that Remainer neighbours were having a jolly party of their own. The journey home around midnight was uneventful.
Posted by David at 19:31

Thanks for taking the trouble to post this chronicle David. We continue and Grassroots for Europe have published a strategy paper for comment - see https://grassrootsforeurope.org/2020/02/21/brexit-futures-preparing-to-change-the-game

Congratulations, Peter - that's the best-argued essay I've read on where we are now and what to do next. We are going to have to band together better than the Remain groups did before 31 January (though the million-strong marches were no mean achievement). And I love the term 'grassroots' - it's parallel to the 'political rewilding' I've been discussing with Good Chance, the theatre group for refugees: http://davidnice.blogspot.com/2019/12/good-chance-conviviality-in-dalston.html

We are joining Kent together at the moment David plus working on the verticals by meeting the European Movement. A friend wants to start a Euro Cafe in North London if you know anyone who may wish to help.

By the way, I sense you may have only caught my Chas and Dave Cockney Brexit kneesup. I adapted most of the others and my talks between to the Johnson problem. The trouble with writing satire based on current affairs is of course that current affairs move so fast these days such that locating anything in the "here and now" is potentially problematic.

Some of the songs performed are available on The Brexit Party Album - the party album to end all parties !! :-) https://academy-of-rock.bandcamp.com/album/now-the-brexit-party-album

A Euro Cafe sounds like a great idea. Partner has launched at least the name of House of European Art (HEArt), and several inititiaves including the Hubert Butler Essay Prize, coming up for its third year. The question remains, though, whether there will still be culture coming out of Europe House now that the Brussels-sent delegation is in place.

No criticism of your songs, just observing more or less what you say - that things move so fast, we may even be a little bit nostalgic for Mayhem days.

Thank you for this report, so very much. That's a wonderful photo of the cape to head it off. Your comments to the press were spot on, so bravo. With hope for better times ahead, dark as it seems right now . . .

And thank, you, Sue. #EUsupergirl is so creative - only 25! Anything may happen now; we just watch the Toronic invasion dig itself into ever deeper holes; events may well overwhelm it. Meanwhile, we look on aghast as your (as in America's, not your own) Horror Clown kills people wih his coronavirus nonsense.

Only 25! It gives one hope, despite it all. Yes, over here, it's beyond one's worst imagining. And among many tragic things is we have in Warren a strong leader who has put out an extensive, intelligent proposal for exactly what should be done. Yet the press drowns her out in favor of "horserace" nonsense. Still, as we say here, we persist.

I know - I have consistently been asking, on LinkedIn, why Warren isn't doing better. She would HAVE to be a wiser choice than Sanders, and stands for so many of the same things, yet she's constantly set up as being opposed to him. I'd vote for her if I could.

Did you see that marvellous photo of Greta Thunberg and Malala Yousafzai - now a poised young woman - together at Oxford? That, too, gave me hope.

To your very justified puzzlement, there are thousands of theories, but it all really boils down to fear, which is leading voters, including a huge number who KNOW Warren is best suited to our times, to make exceedingly bad decisions. Our primary process is a disaster to begin with, and this time around, fear, in the wake of the 2016 outcome and all that has ensued since, is an extraordinary driver, fueled by highly dubious poll-driven pundit narratives on the great unknowable of electability. It’s “amusing” to read of people grappling endlessly, then deciding on Warren because they went "with their hearts instead of their heads" (by the latter of which(!) they mean they should have chosen Biden or Bernie. Ironically, these two, using my head, as it were, are among our very weakest choices when it comes to electability—let us hope not disastrously so. That sort of says it all to me about the perilous upside-down state of American voter “logic.”

I have not seen that photo, but yes, if we can only manage not to foul things up completely, they are our hope.

The 'heart vs head' muddle gained traction during the Referendum, when people's 'hearts' were manipulated by the lying press, and it was as if there couldn't possibly be a marriage of thinking and feeling when it came to Brexit. People are very confused these days, and without profound psychological examination, I don't entirely understand why it should be worse than it was before. Above all, when you see a leader behaving abominably, your choice should be clear. But no, voters hated Corbyn - again, partly due to media manipulation - than they did the total liar and cheat Borump, just as in America they have a morbid fear of 'socialism' above the total destructin of the country.

The answer is that whether here or in the States the electorate in general should not be asked to decide on leaders or policies. Voters should elect representatives - members of Parliament in our case - who should not be restrained by their local party faithful ( see Edmund Burke). Then we avoid both the demagogues which Attlee warned us about and the concentration of power in tiny groups of the party activists. Our system was prostituted on both counts on the Brexit question. I am afraid that the US constitution is irredeemably incorrect on both counts.

Who asked the question? There are plenty of others here to review afresh. But yes.