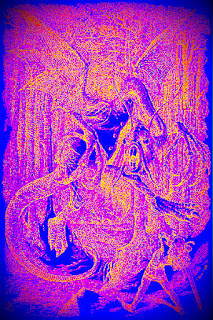 As noted after I'd reeled out from the concert premiere of Gerald Barry's Alice's Adventures Under Ground in 2016, the composer sets the greatest absurdist poem I know in French, German and Russian. Having been struck again - twice - by Barry's genius in Antony McDonald's perfect Royal Opera production, I thought I'd do a trawl for readings of translations on YouTube. The only good one I found is the Russian version.


There's also, however, a consummate delivery of the original, savouring every word, from the great Christopher Lee.


Since I could spout the first two stanzas at will, I made an effort to learn it all by heart, and it's surprising how it trips off the tongue. Martin Gardner in The Annotated Alice compares the best nonsense poetry like this to abstract art, and in both, he suggests, the artist should not struggle too hard to try and find connections which should flow unconsciously; as he points out re the likes of Getrude Stein and the Italian futurists, 'when the technique is taken too seriously, the results become tiresome'. 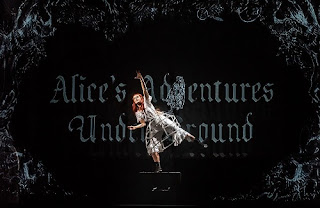 I seem to have spent a lot of time hanging around the Royal Opera House even when I wasn't going to see the show in the main house (which I did first on the press night - and wrote about it for The Arts Desk - and then to see the second of the two casts on Sunday at noon. Production photos here by Clive Barda). Saturday was a case of no good deed going unpunished; on Friday, I'd arranged with my beloved but scatty friend Edsy to meet her, husband Kit and goddaughter Mirabel plus various friends between shows (they had tickets for both). In the morning I fixed up a time for a backstage tour of props by my pal the wonderful Nicky Spence, since he does such a superb job here.


He was happy to oblige; his sister and her children would love it too. Yet despite four emails and five phone messages, Edsy was not to be contacted in time - I didn't see them come out of the earlier showing and the opportunity passed. Found them later; she'd lost her mobile IN DECEMBER. But this is boring for the reader; the fact that Mirabel and Kit weren't going to the second showing meant I could take them to Blade Rubber Stamps next to the London Review of Books shop and treat her to a Tenniel of her choice. I gave J this one and it's quite fun to sign off with when it comes to sending cards from the two of us. 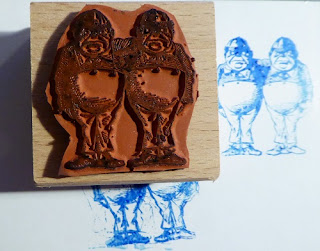 In the end she preferred a row of (non-Tenniel) lizards to be reproduced in rainbow print. I left father and daughter at the British Museum, where Friends of the Earth were protesting BP sponsorship of the Troy exhibition (I'd been, didn't learn much I didn't already know, but it's a good education for lots of folk) with a wooden horse. 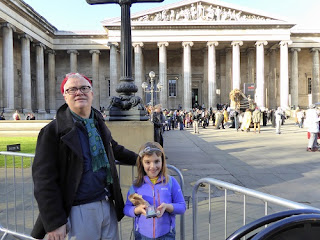 What followed turned out to be a long walk on the beautiful sunny afternoon before Storm Ciara struck - J was getting it in Galway at the same time - from the BM to the length and breadth of Bermondsey High Street before I took a bus from outside the Tower of London and then a tube to King's Cross for the 7pm Aurora Orchestra concert. For a start, it was good to see the first crocuses in Bloomsbury Square. 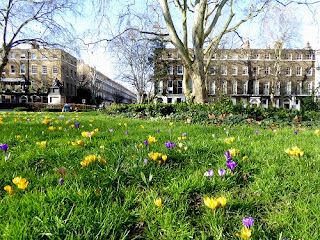 Had planned to go home for a couple of hours, but Temple tube and the District Line were closed, so I admired the first blossom by the Thames 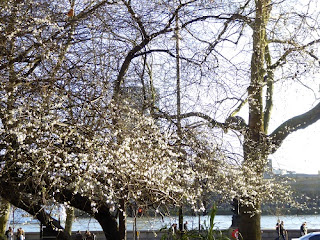 and the dropped into Two Temple Place for a so-so exhibition of women collectors of fabrics (any excuse to see the rooms, but not quite sure where Yinka Shonibare's ship fits into it all), 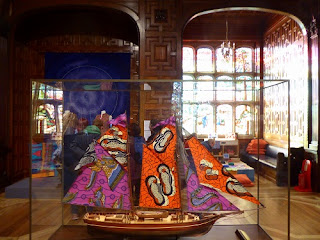 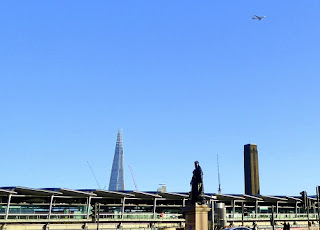 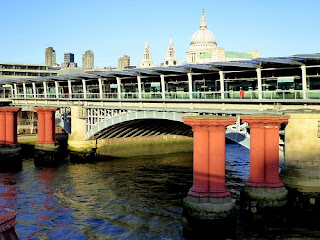 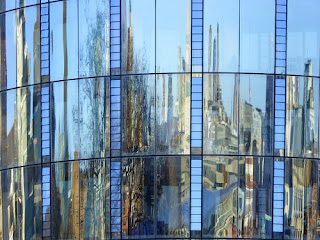 to join the hordes from the Southbank Walk to London Bridge, then via some of the back streets to trendy Bermondsey - can anyone identify this astonishing yellow-flowering tree? - 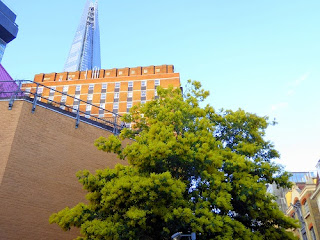 followed by a pop in to the Eames Gallery - excellent linocut prints by  Gail Brodholt, excellent urban scenes though I especially liked the motorway perspectives, and covet this one - 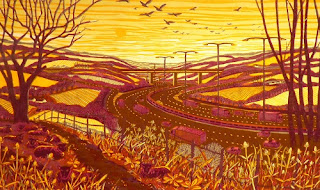 and the White Cube where the latest Anselm Kiefer exhibition had so stunned us the previous week (need to post on that anon). The spaces are filled, spectacularly enough from one perspective though not from many as the Kiefers achieved it, with mew works by Cerith Wyn Evans, including fig. 0 in white neon. 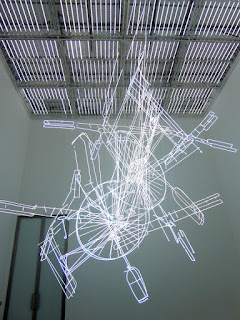 Coffee at the south end of the street, which I hadn't reached before (we always stop at Pizarro for lunch), 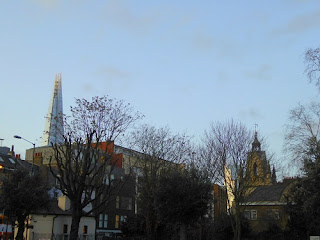 and then I noticed full moon rising. 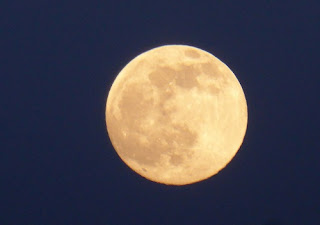 I reckoned it would look even better on the river, and though it had risen further by the time I got to Tower Bridge it was still complementary to the rest of the twinkling lights. 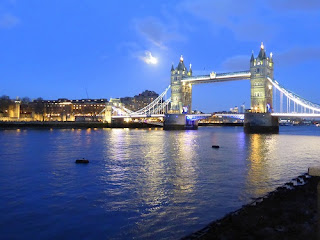 Flash, when on, is erratic in doing its stuff; when it does, the image is sharper and of course the background darker. 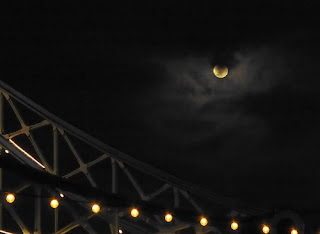 Sunday was very different. I gave myself bags of time to struggle through the storm and catch a tube back to Covent Garden, though it came immediately, and missed the downpours both ways (they came later). So glad I caught the 'other' (not second or B) cast, because the two with the most to sing were piu brilliante: Nicky, going for broke in his last performance(s) as the Mad Hatter and others, and Jennifer France, who beamed out what I'm told are 98 top Cs with fearless brilliance. Here our two national treasures are with Robert Murray as the March Hare and Carole Wilson as the Dormouse. 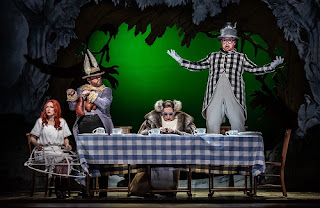 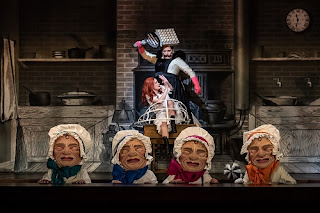 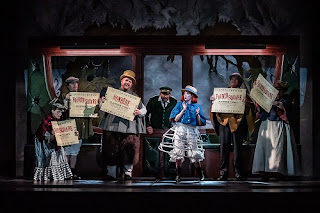 and very near the end. 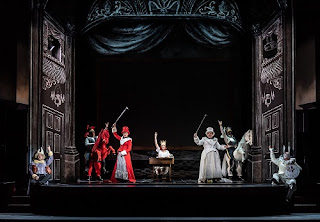 Claudia Boyle and Sam Furness in the previous cast were excellent, but these two were off-the-planet fabulous. So were the brass, perfecting their tuckets and galops under Finnegan Downie Dear - cool as a cucumber, Nicky later told me. I wasn't intending to intrude after, but he appeared from the stage door just as I was heading down Floral Street (I'd been chatting with the wonderful Elizabeth Wilson, so good to see here there. She's taken part in recordings of some of Barry's chamber works). Then Joshua Bloom, such an excellent Humpty, appeared on his way to his last performance, and La France with a friend. Here's a happy group pic in the storm. 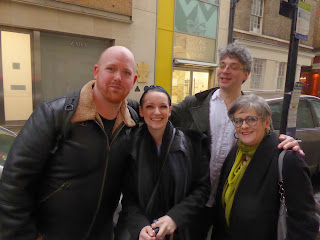 May they all be reunited in the inevitable revival as soon as possible.
Posted by David at 11:38

It is I trust only a little off piste if I report that Queen Victoria, having read the Alice books, asked her Private Secretary to obtain another work by Charles Dodgson and received

An Elementary Treatise on Determinants: With Their Application to Simultaneous Linear Equations and Algebraical Geometry

Very good! Clever chap, that Dodgson, and open to spontaneous fantasy, which I wouldn't have thought a usual gift in a scientist/mathematician.

I suggest that you are a bit unfair on mathematicians, many of whom are at tremendously into music, especially Bach and Mozart.And Dodgson was what we would call today a logician, and logic is close to both mathematics and to Bach, and very definitely to the Alice books which however fantastical on the surface have a very logical structural undertow.

Can't agree with a lot of that. Being 'tremendously into music' isn't the same as possessing a spontaneous sense of fantasy. The structure is superficial in some of the logic which seems to surface in Carroll's conversations - for a bit, then vanishes in the dreamlike flow. Maybe there's logic in the Looking-Glass game of chess, but Carroll bends the rules when it suits him. In neither book is there what we would call a plot - which makes them tricky to adapt for the stage.

But I fear this may steer us far away from the ostensible subject(s), on which I guess you can't comment in part since you didn't see the opera.

Jabberwocky, crocuses and Gail Brodholt all in the same post. Can't beat that. Love her work - all those trains and stations and rail lines. And the motorway is outstanding.

Ah, did you check out the exhibition online? I meant to provide a link, and now I shall. I was really tempted to splash out. And as, bizarrely, I'm due a small tax rebate, I yet might.

I always loved that story about Queen Victoria receiving a treatise on maths (or whatever) by Carroll/Dodgson, but later read that it was doubtful and unlikely to be true. But maybe it is true after all, I really hope so. Who can tell what is true or fake these days? “When I use a word,’ Humpty Dumpty said in rather a scornful tone, ‘it means just what I choose it to mean — neither more nor less.’ Could Humpty be the latest weirdo to be hired by our benighted and fraudulent rulers? The duck and the dodo from 'Alice' were Duckworth and Dodgson (Do-do-dodgson because of his stutter) who took her and her sisters out on that famous river boat trip, as I'm sure you know. Not only a clever chap, but also remarkable that he wrote himself into the adventures as a stuttering extinct creature. Very disappointed to have missed this, hope I'll get another opportunity to see it some day. Laffin' and grief...

The perfect channel for letting off some steam..a real shame it wasn't filmed. I can see some parallels between Humpty and the Prime Monster. Of course in the opera he sings his song to the music of the 'Ode to Joy', so that would have to be changed.

I bought 'The Annotated Alice' to catch up on just such references as the one you mention. It is an inexhaustible classic.

As for Vicky and Lewy, si non e vero, e ben trovato, as I said to Humpty (Joshua Bloom) over a Barry-and-Hannigan story he related at the stage door.

It will be back, and hopefully filmed the next time. Fun, as I wrote, for children of all ages. I think the kids who didn't like it may have come from the Home Caynties and brought up on sugar and spice and all things nice.

Oh, my, such fun! Unlike you or my J (and probably yours), my schooling didn't urge me on to learn poems by heart. We were, however, charged with at least memorizing one, and the one I chose was Jabberwocky. Mrs. Dumney sternly admonished me that I would flunk if I missed even one word. You'll no doubt be glad to know I aced it, at least back then. Even now, the first two stanzas come pretty readily, and you're right, the whole of it does trip off the tongue.

Neither of us here was encouraged to learn poems by heart - though we did have to memorise selected lines of plays and novels to reproduce glibly in O and A level exams. As for tripping off the tongue, that's one of many things Carroll has in common with W S Gilbert (and, in Gilbert's case, the unforgettable way Sullivan set the text).

Oh, that's interesting that neither of you were encouraged to learn poems by heart. As my J rattles off lines at will, I think I just assumed!