Zooming from Kamarinskaya to The Firebird* 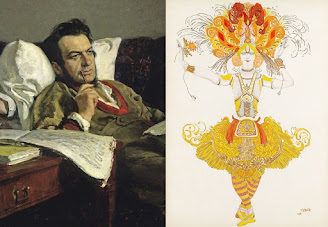 *Prefatory update (28/9) - having thrashed out new plans for a seven-week term between this and the Soviet music course, I've shunted The Firebird to the start of the 1900-17 sessions. So it's strictly From Glinka to Rachmaninov now. See revised schedule below.
So my last non-operatic Zoom class has run the symphonic gamut from Haydn to Adams, and I'm very proud of what we achieved - not least the participation of spectacular special guests each week, which waxed as lockdown dragged on. Just for the record, we had Jonathan Bloxham and Ian Page on Haydn, Mark Wigglesworth and Jonathan again on Beethoven 3, Nick Collon on Berlioz's Symphonie fantastique, Catherine Larsen-Maguire on Schumann 2, Brahms 1 and Adams' Harmonielehre (and much more from her as regular visitor to the other classes), Vladimir Jurowski on Brahms 4 and Tchaikovsky 6, Paavo Järvi on Mahler 3, Vasily Petrenko on Mahler 9 and Elgar 2, Kristiina Poska and Andres Kaljuste on Sibelius 5, Andres again on Nielsen 5, Mark Elder on Vaughan Williams 6, Elizabeth Wilson and Peter Manning on Shostakovich 15.  Friend and sometime student Juliette made an artist's impression of the Brahms/Tchaikovsky class; probably wasn't paying full attention but I'm amused to see this. 'Vlad' is in the centre of the bottom row (!) Click to enlarge if you really want to see the grisly details - and if you were there and on the second 'page', think yourself lucky to have escaped. 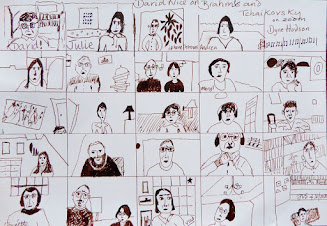 In that ripe time, Madama Butterfly on the Opera Course was also enriched by three major exponents joining us for three full two-hour sessions: Ermonela Jaho, Antonio Pappano and Mark Elder. A glorious complement indeed to Susan Bullock's presence throughout our Elektra classes.
Opera in Depth will resume with ten Monday afternoons on Götterdämmerung, starting late September and concluding our three-year survey of Wagner's Ring (any excuse to feature another of Anselm Kiefer's majestic apocalyptic visions from one of two White Cube exhibitions which knocked me for six, pictured below). It will remain on Zoom, as though Pushkin House is re-opening on a limited basis, I doubt if many students will want to return. I'm nearly halfway through Siegfried for the Wagner Society of Scotland, regretful at not returning to the woods of Gartmore this year; in September 2021 we'll probably embark on Tristan und Isolde. 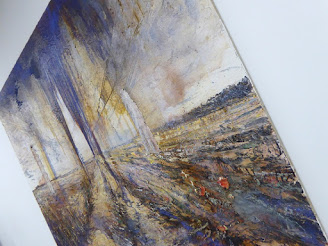 At the same time I didn't want to disappoint the enthusiasm of the surprisingly big following for the symphony course - plus of course I need to be employed during this difficult summer, and I'm lucky that it can be on something I love - so this coming Thursday afternoon (6 August) I'll undertake a survey of Russian music from Glinka's Kamarinskaya to Stravinsky's The Firebird. If that's successful, we'll press on to the Soviet era in a second course.
For the outline, I only have to repeat what I wrote before beginning the symphony course.Below are the plans for all 10 classes, just so that I have them in something I can link to rather than just on an attachment. Message me if you'd like to join for all or some: it's a bargain (I halved the usual fees because I don't have room hire expenses and Zoom is, after all, not live with great equipment to hand, so it's £10 a class, ie £5 an hour. We meet on Thursday afternoons (exact time to be confirmed - one student suggested we start at 2.30pm rather than 3.30) tomorrow, 3.30-5.50pm. and if anyone misses a class or has connection/sound issues their end, I can send on a recording of the whole thing. Send me a message with your email and I won't publish it, but I'll be sure to get back to you.
Special guests TBC (though there will be fewer of them than during strict quarantine time...). Pictured up top: Glinka by Repin (detail), The Firebird by Bakst. The three illustrations below are by the Russian artist Ivan Bilibin, starting with the scene where Pushkin's Ruslan meets the giant head. 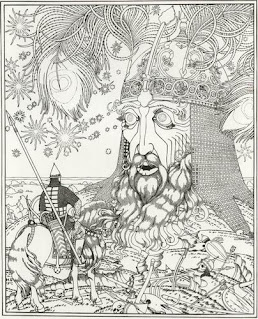 1: Glinka: Russian acorns  6 August
The indisputable father of distinctively Russian music, his operatic predecessors and his two major works for the stage: the nationalist-history opera A Life for the Tsar and the fairy-tale opera Ruslan and Lyudmila, the first of many to be based on a work by Alexander Pushkin.
2: To 'the Five' and beyond 1: national style  13 August
Glinka again kicked off with his short orchestral fantasia on two folksongs Kamarinskaya. It had, as Tchaikovsky noted, a huge impact on all Russian composers, not least those whom Balakirev briefly gathered round him to take up the legacy of a truly Russian style - Rimsky-Korsakov, Borodin, Musorgsky and Cesar Cui.
3: To 'the Five' and beyond 2: the influence of the east  20 August
Composers, like poets, travelled far and wide, especially around the fringes of the Russian Empire, and absorbed Persian and eastern music into a new 'exotic' style. Again, Glinka paved the way with the dances at Chernomor's fantasy eastern castle in Ruslan and Lyudmila.

4: 'The intonations of native speech': a new kind of opera  27 August
Dargomyzhsky's The Stone Guest, based on Pushkin's original take on the Don Juan legend, pointed a way forward in the speech-melodic setting of verse. Musorgsky took it one step forward in the prose scene of Boris Godunov and his unfinished Gogol opera The Marriage.
5: The symphony: from Rubinstein to Tchaikovsky  10 September
Was there an element of anti-Semitism in Balakirev and co's rejection of symphonies by Anton Rubinstein? At any rate. the great achievements in the form did not come until the Second Symphony of Borodin and Tchaikovsky's experimentation with form. 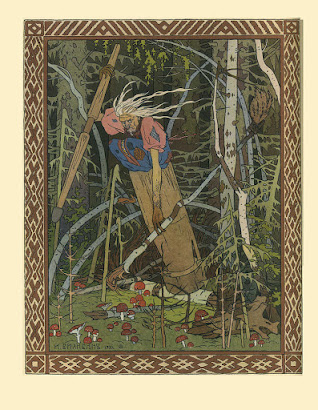 6: Characterisation and style, opera and piano music 1 3 September
More on Musorgsky's Boris Godunov, aligned with his piano epic Pictures at an Exhibition. Pianist Samson Tsoy takes us through the piano work, with a later contribution from Pavel Kolesnikov.
7: The great Tchaikovsky ballets  17 September
Inspired by Delibes, Tchaikovsky took the art of piquant orchestration and original melody to supreme heights in Swan Lake, The Sleeping Beauty and The Nutcracker.
8: Characterisation and style, opera and piano music 2  24 September
Tchaikovsky's characteristic romants style in Eugene Onegin, the songs and his piano cycle The Seasons. Pavel Kolesnikov joins us again to talk about Tchaikovsky's piano writing.
9: New paths in chamber music   1 October
The formation of chamber music circles and the advent of a supremely gifted composer in the form, Sergey Taneyev, brought big steps forward from the 1890s onwards.

10: Tchaikovsky's natural successor   8 October
Rachmaninov made his mark on the world of Russian music as a teenager with his C sharp minor Prelude and the one-act opera Aleko. We look at his specifically Russian works for both piano and orchestra. With special guest Kirill Gerstein. 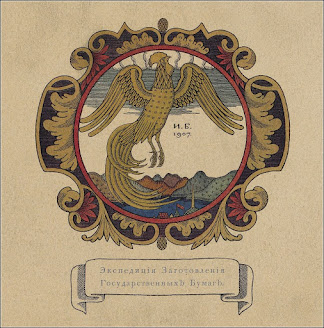 UPDATE: latest thoughts are to carry The Firebird over to the first of seven classes starting at the end of October, dealing with Russian music in the seven years leading up to the Revolution. So one class apiece on The Firebird, Petrushka and The Rite of Spring, looking around and across at other related works, one on Rachmaninov's Vespers in the context of the Orthodox musical revival, the next on his Choral Symphony The Bells, a class on Scriabin and a last session on developments up to 1917, including the music of the young Prokofiev.
Posted by David at 15:37

Brilliant class, and lovely to see it all recorded here. I would like very much to join in the Russian music class. I don't DM, but will email you on that.

Thanks for support as ever, Sue. Not sure what DM is, but I'm about to email you back.

Ah, I see I have become "infected" with initial speak (DM), as I transposed your comment to "message me" to "direct message" which is used on some social media. And I don't even use any social media. Anyway, thanks for connecting, and I am looking forward to catching up with the class, now that our power here is back on.