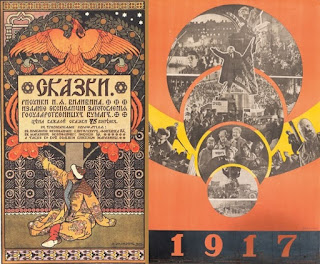 First term of my Russian music course on Zoom went well, by which I mean there were lots of happy students and I enjoyed every minute of it, firming up allegiances and discovering more (especially in the sphere of chamber music). In the end we covered ground from Glinka to early Rachmaninov, stopping at 1900, with a few glimpses into the future. My original idea, to devote the 10th class to Stravinsky's The Firebird as a last great synthesis of the fantasy tradition, was postponed simply because the one class I'd intended on Musorgsky's and Tchaikovsky's piano music turned into two.

That was because Samson Tsoy had so much to say about Pictures at an Exhibition and his partner Pavel Kolesnikov, who popped up briefly at the end of that class, was happy to return a couple of weeks later. When great musicians are willing to come along, as they did for every class of my course on the symphony, you have to be flexible (pictured below by Eva Vermandel, Samson and Pavel during their phenomenal Ragged Music Festival, from which I'm still recovering: read what one of my students described as a 'palpitating' review - that's got to be better than 'gushing'). 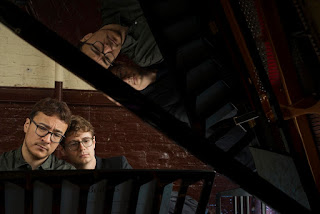 I'd also intended to go straight on from the first term to Soviet music. But it occurred to me that those seven amazing years from 1910 to 1917 could take a term of their own, albeit one of seven classes (taking a break and mapping out the possible up to Christmas meant I ended up with that number). Here's the plan. We start on Thursday 29 October and each class runs from 2.30pm-4.30pm (longer under certain circumstances). £10 a class so £70 for the term. Special guests TBC, though two top pianists have already shown willingness. UPDATE (19/11) Seven classes have evolved into eight, due to an enrichment not unlike the one we had in the first term.

1: The Firebird and the end of a tradition  29 October 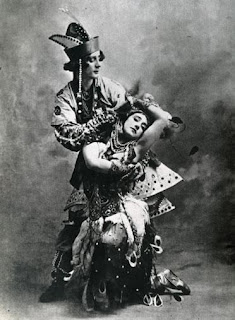 Stravinsky's first ballet for Diaghilev - the exotic exported to Paris - reflected the fairy-tale compendium of its scenario with homages to the fantasies of his teacher Rimsky-Korsakov and others, but also nodded to the harmonic experiments of Scriabin and looked forward to the rhythmic revolution of The Rite of Spring. I'll be placing it in the context of the 19th century tradition as well as the early years of the 20th century. Pictured above: Mikhail Fokine and Tamara Karsavina in the 1910 Ballets Russes premiere.

Stocked high with highly original treatments of familiar folk/urban song, Stravinsky's fairground ballet of 1911 features a radical use of orchestration which owes its originality to Tchaikovsky's example. But it is also startlingly modern in the scenes featuring the pathetic Russian Pierrot come to life. Hungarian-born conductor Gergely Madaras is our special guest.

3: The Rite of Spring I: mostly melodic and traditional  12 November 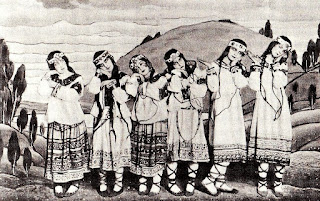 Often overshadowed in the stress on rhythmic iconoclasm is Stravinsky's use of singing themes - only three of them this time taken from folk sources. Again, the mix of modernism and tradition is startling. Pictured above: maidens in Nicolas Roerich's designs for the Ballets Russes premiere of 1913. Andrew Litton, whose BIS recordings of Petrushka and The Rite of Spring are such a revelation, joined us for this class, and going with the flow meant we were only halfway through what needed to be said and demonstrated about the work. A second hour was intended the following week, which stretched to two - hence the offer I've just made of a free eighth class.

4: The Rite of Spring 2: polyrhythms and unfathomable accents  19 November

Andrew's return yielded more fascinating chapter and verse, and the return of Catherine Larsen-Maguire gave us insights into the writing for bassoon - her instrument before she changed to conducting. Leonard Bernstein in his Norton lecture 'The Poetry of Earth', Pina Bausch's choreography and Stravinsky speaking again on the aftermath also joined the party. 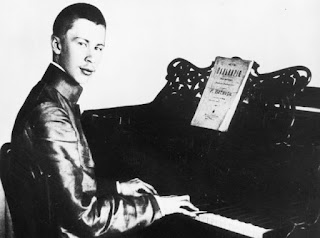 First appearing on the scene in the same St Petersburg Evenings of Contemporary Music where Stravinsky made his debut, a young Conservatoire student quickly created a sensation. With special focus on Prokofiev's first two piano concertos, early piano pieces and the Scythian Suite derived from his first ballet music for Diaghilev, Ala and Lolly.
6: Rachmaninov's The Bells and his Vespers as part of the revived Russian Orthodox tradition  3 December
The rediscovery of ancient church traditions only really took off in the early 1900s, and was flourishing when the revolution put a stop to so many schools of choral music. Before that happened, though, it produced its greatest synthesis-masterpiece, Rachmaninov's numbers for the All-Night Easter Vigil known as the Vespers, in total contrast to his choral symphony inspired by Edgar Allen Poe The Bells.
7: Scriabin: mystic chords and apocalyptic visions  10 December 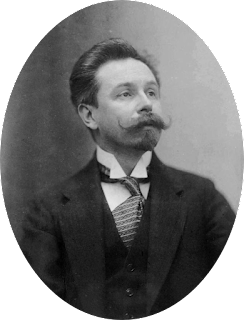 Boris Pasternak thought him 'warped, posed and opinionated' but also as bright as the sun in his music; Prokofiev found his harmonic discoveries a millstone weighing down his options. But there's no doubt that Alexander Scriabin was a true original
8: On the eve of an earthquake  17 December
What kind of music were the Russian composers creating as the February and then the October revolutions broke? Prokofiev's diary gives a special insight into where he was and what he was doing at these times, with cinematic descriptions of being caught up in the chaos of Petrograd early in the year. We also look at Rachmaninov's last great compositional flowering before exile and the need to tour as pianist slowed down his creativity.
Do join us - and if you can't do so on the afternoon, I send out recordings (video if film is used, audio otherwise). You don't need to have attended the previous course. If you're interested, just send me a message with your email: I won't publish it, but I promise to respond.
Posted by David at 12:31

Max Derrickson asks me to contact you about the threat to the Ralph Vaughan Williams Memorial Library from HS2 tunnelling. He says (on Linked In) it's terribly significant.

I checked my facts with the HS2 engineers, and although they've changed their plans a little, I'm fearful it may not be enough to protect the wax cylinders from vibration.

I've left a message with The Arts Desk with my contact in, because I'm not far from Cockfosters.

Such unforeseen circumstances arising from this impossible project. RVW would find it curious that his legacy might suffer alongside some of the loveliest and oldest trees in England. Wonder if I can do anything? Leave another message with your email if you want to carry on the conversation, and I won't publish it, but I'll be in touch.

Like your symphony course, the whole Russian music course so far has been fantastic. Very much looking forward to the next installment!

Thank you, Sue. I know people are sceptical whenever anyone writes 'I'm really excited about this', but I really am - I'd start tomorrow if I could. But it's good to have the space to think and breathe.

Even just as a participant, I'm also glad to have a breather to take it all in. An embarrassment of riches, this course. Thank you so much for putting it all together.

And thank you again, Sue for the kind words. I'm so enjoying the art of selection in a sweeping musical history.

This is an aside, but I have been listening recently to Britten's Cello Suite No. 3, which I believe he wrote for Rostropovich. After learning about the use of Russian folk songs in your class, it was a delight to learn that three of the four themes Britten used in the suite were folk songs arranged by Tchaikovsky – Under the apple tree, Autumn, and The grey eagle. (BTW, I was alerted to a wonderful performance of the Suite by Joy Lisney. I wonder if you might know of/have heard her play, as she is based in London. (The video is over on my site, if of interest.)

Britten's connection with Russia through Rostropovich and Galina Vishnevskaya yielded amazing results - I also love the song cycle setting Pushkin (in Russian!), The Poet's Echo. And it is extraordinary to think of a Britten opera based on Anna Karenina, which would have been for Vishnevskaya. I only know the name of Joy Lisney, I'll give it a go when I have time.

Yet more evidence how powerful and many-faceted Britten's Russian connection was. A Britten opera based on Anna Karenina would have been stupendous. But, alas, I guess one can't have everything!

So would a Verdi King Lear, a plan at one stage. But he did compose Rigoletto, which has some elements of the Lear story...