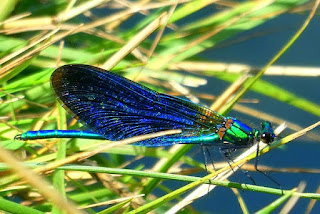 Of the -fly variety, that is. I'm far from acquiring expertise in the field of anisopterophilia (no idea if there's such a word, but I claim it using the Latin word for 'dragonfly'), but these amazing critturs, descended from bigger ones who flew around before the dinosaurs, have stolen the scene for me this summer.

The first I espied on a plank of wood by the smaller of the ponds on Epsom Common - I've already used one shot in my post on the natural discoveries made during hospital visits, but there's no harm in putting up another since I now have reason to believe it's an Emperor dragonfly (Anax imperator), which was to be my final companion of the season back at the Wetlands Centre (zoom to the end of the piece for other images). 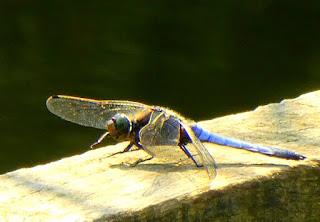 Then we have another damselfly to complement the one above, which takes first prize for sheer peacock beauty if not size (the Beautiful demoiselle, I think, Calopteryx virgo; more on the context soon). On the banks of the river Brue at Bruton, where we'd stopped to see the outwardly splendid church with its tall tower. Likeliest candidate here is Large red damselfly (Pyrrhosoma nymphula). 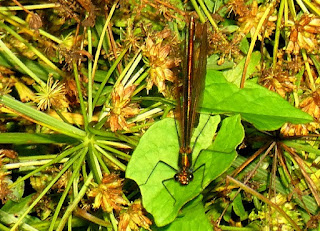 Even when the wings are spread, you can't see the black spots which make such an impression when the creatures are whizzing about. 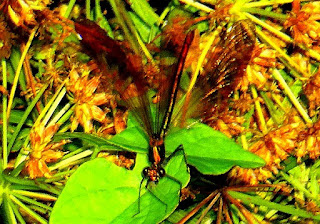 This was on the first day of our blissful August stay with friends Andrew and Deborah at Lacock - we'd just been to see the latest exhibitions at the amazing Hauser & Wirth Somerset, which really should have had a post of its own, had I but time. On the sunny Sunday, we walked the valley of the By Brook river via Slaughterford (beautifully situated tiny church) to lovely (deservedly touristed) Castle Combe. Flood damage had closed off what Deborah said was one of the most attractive stretches of the walk along the river beyond Slaughterford, but we rejoined it at a loop, and this is where damsel- and dragonfly activity was at its liveliest. I've never seen a dragonfly curving its back to lay eggs on vegetation and water, but that's what we got from what I'm fairly sure is a Brown hawker (Aeshna grandis). 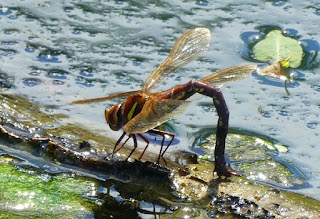 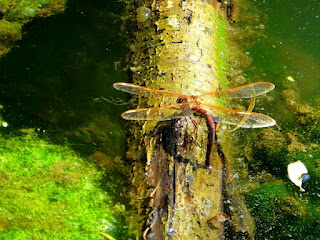 I think you can just about see an egg being popped out into the water in this film.

It was here, too, that I saw my first Beautiful demoiselle, but there were more on the river banks by the pub where we had a drink before the last, wonderful stretch to Castle Combe. 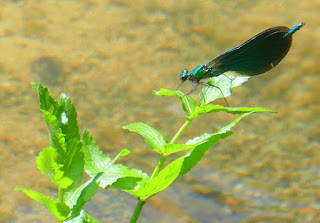 By far our richest dragonfly time was on a magical late afternoon walk around Hickling Broad nature reserve, part of the same Norfolk day the earlier rewards of which I blogged about here. For starters, our way was guided by one particular creature always flying on ahead of us and coming to rest on the ground at times. A knowledgeable nature lover confirms that this is probably that elusive crittur the Norfolk hawker (Aeshna isosceles). 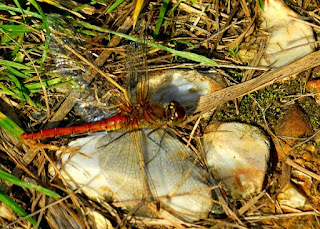 Here's a closer view of the miraculously wrought wings. 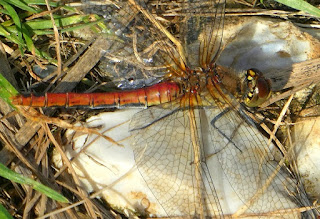 The best was yet to come - when we reached the outlook over the Broads, which Jill had promised us would be glorious, dozens of dragonflies were sunning themselves on the wood, or flying around. 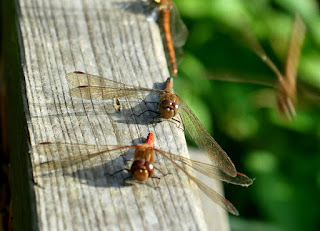 Only Common darters (Sympetrum striolatum), male and female, but in what abundance. 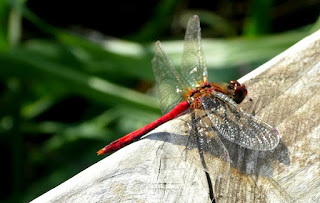 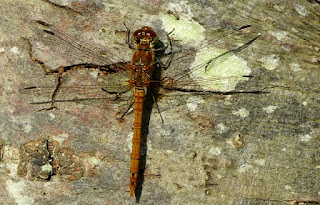 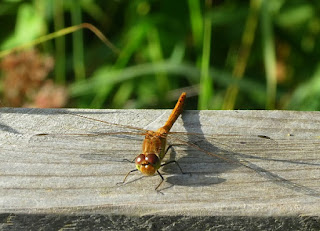 They ignored the ladies in our party, but seemed to like landing on us men. 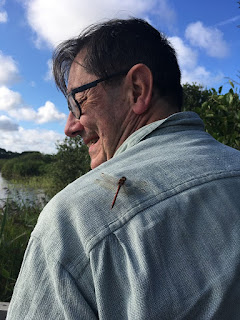 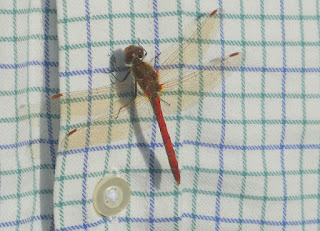 More sunbathers lined the way along the path - Brown hawkers among them. 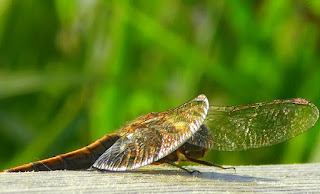 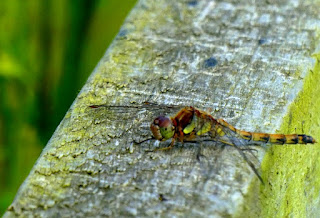 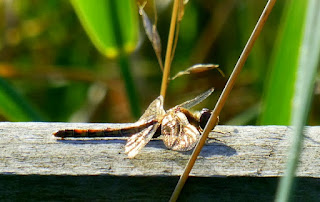 Thereafter we were rewarded with a return through a very lovely oak wood, long tailed tits the only avians to spot, but what a libellulously rich excursion.

In mid-September dragonflies were still abundant at the London Wetland Centre - whole swarms of them one late afternoon along the east side of the sheltered lagoon. And this brings us back to the wonderful, and prolific, Emperor dragonfly, last seen there in early October. 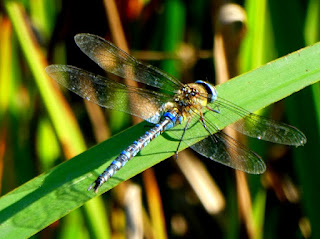 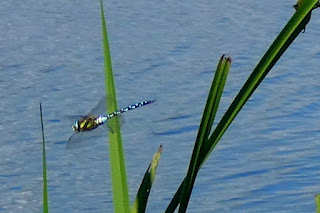 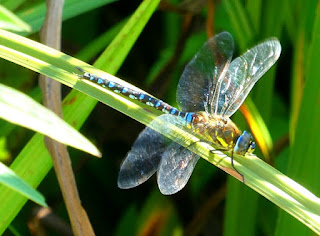 Now it's time for the migrating birds to take over, but the dragonflies were the main event for me during August and September. You can see why.

Thank you, Kirk. I long to discover the natural wonders of south-western USA, especially after reading Willa Cather.

Lovely photos
No more blogs since
They missed

One is in the wings, Liam. Work has been insistent. But I have others in mind. Thanks for commenting - I do miss some of the usual pats on the back, but I shouldn't be so needy...but it feels odd to work in a void.

Well you give much joy and stimulation. Remember " I'd you do to the least of these my breathan you so it to me". More people may read and just bit comment. So keep it up.

Interesting to read about the new adventures
Of your friend Sophie in siena. She is a doer
She must be very organised.

Sophie is the most dynamic and adventurous person we know. A core of steely determination, and so much imagination and flair to match! We will see her there soon.