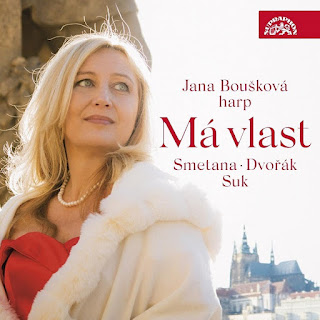 My Opera in Depth course this term - half devoted to Janáček's Jenůfa, the other to Martinů's Julietta - had already been under way for three weeks before I launched the Thursday class, a more general survey of a genuinely Czech music from Smetana through to Martinů, with a preludial look at 18th and early 19th century works by Bohemian composers in the European lingua franca of the time.

The main point, though, was to reach the epic at the heart of Czech musical experience, Smetana's Má vlast, which launches every Prague Spring Festival on the exact anniversary of this founding father''s death. And I was lucky to know the Czech Philharmonic's principal harpist since 2005, the vivacious Jana Boušková, who with her colleague Barbara Pazourová usually kicks off the stirring first symphonic poem in a magnificent sequence, 'Vyšehrad', capturing the essence of the proud castle which stands above the River Vltava.

Jana accepted the invitation without hestitation. I'd become friendly with her at Paavo Järvi's Pärnu Music Festival, the best in the world for connecting with musical hearts and souls; and indeed she was invited there because she'd played in the Má vlast which Paavo conducted in the 2016 Spring Festival. 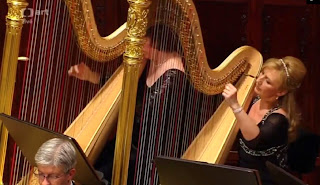 That year Jana and Barbara played the opening statements of the work's main theme, plus cadenzas, together; as it's written in the score, the second harp plays the melody and the first elaborates. Jana has actually played alongside five of her students in a Prague Conservatoire opener conducted by the late, great Jiří Bělohlávek. The one I had to hand to show the class was with a mere five harpists (students minus Jana).

Another beauty of our introductory session was that I moved on to the most celebrated of the six symphonic poems, 'Vltava' (still better known outside Czechia as 'The Moldau' - but in the transcription made by the harpist and contemporary of Smetana Hanuš Trneček, in Jana's performance at a Czech Philharmonic fundraiser in the Rudolfinum during the first Covid spare, to help fund Prague hospitals (the number you see on the top right is the figure in Czech korunas, which shot up throughout).On the CD featured up top, Jana has referred to Trneček's work, but the transcriptions of the first three symphonic poems and of the rest of the works on a superb disc are her own. 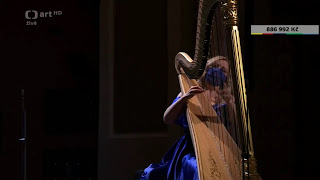 The students warmed immediately to Jana - how could anyone not? - and there was much emotional discussion of the high level of musical education and literacy in that remarkable country. It was also vital, when Jana grew up, to have music as the world you inhabited when life under the Soviets was not so good - and to think of touring to the unimaginable rest of Europe or America as a top player, as her mother did (her father was a flautist in the Czech Philharmonic, so the couple played beautiful Mozart, inter alia, together). If you click to enlarge the image, Jana isn't difficult to spot - she has the Prague Old Town skyline behind her. 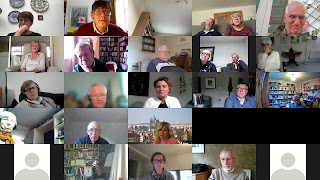 Today we move on to the Hussite chorale used in the last two symphonic poems of Má vlast, 'Tabor' and Blanik', as well as in crucial works by Dvořák (Hussite Overture), Suk (Prague) and Karel Husa (Music for Prague 1968). I'm still mapping out what the other eight classes will bring, though I'll divide fairly equally between 19th and 20th centuries, and the four greats, as depicted in this postcard of which I'm so fond, will have the lion's share. 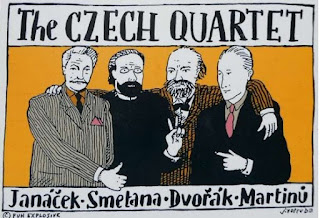 The 10-week course on Wagner's Tristan und Isolde ended the week before we started this one. We had a virtual post-course drinks on the Friday, to which Dame Anne Evans was able to return, having been voiceless in the final class. Many laughs were had by the small but very vocal group on that evening  (Annie second from left in the bottom row).

I was also  delighted to record a Tristan chat with Robin Ticciati on the heels of his run at Glyndebourne, concluded with an orchestrally unforgettable Proms performance.

Equally thoughtful (and the other great British conductor as far as I'm concerned) was Mark Wigglesworth on Jenůfa, squeezing in the time to speak during work with the BBC Philharmonic in Salford (hence the dull hotel room background).

Just recorded another Jenůfa conversation, this time with tenor Nicky Spence, which I hope to air on Monday. Indebted to Mark for suggesting Nicky would make an excellent guest when I was running the course at the Frontline Club. As he did, and I love the generosity of all these exceptional artists, true Menschen all - that goes for Jana and Anne every inch as much as the men. Further guests, TBC, will materialise on the Czech music course anon. Not too late to join - just comment with your email here; I won't print but I promise to respond.

I love that postcard!

Although I'd love to see the Czech quintet, with Gustav Mahler represented as well!

Indeed. It was Jiří Bělohlávek who claimed Mahler as a Bohemian composer, though of course the fact the family spoke German (Yiddish?) meant that unlike the others - who learnt Czech at different times - he wasn't an exponent of what makes Czechia Czechia.