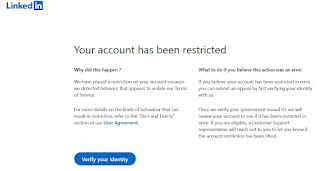 It may seem melodramatic to declare it, but I knew this was coming. The previous 48 hours had seen the removal of two good colleagues on LinkedIn, Cezary Bednarski and Neil Trevitt, both passionate fighters against this misgovernment's many misdeeds, as I have tried to be alongside putting up the usual musical and cultural posts/links. So the writing was on the wall.

I wouldn't claim that LI itself is being politically selective in whom it targets; its AI is very random, a failure I've already highlighted here (when I threatened to leave and couldn't keep it up). But there has clearly been an invasion of right-wingers trying to shut down commenters they don't like. It's quite easy to do. I have in the recent past reported ad hominem attacks, and I make sure not to do them myself (there is a difference between implying that someone has made idiotic comments and saying 'you're an idiot'). But to distinguish the present government from previous Conservatives, I label them the 'Torons', which might be cause for complaint among lily-livered crypto-fascists.

I've also been trying to wage a battle against anti-vaxxer misinformation, and one of those offenders might have taken exception to my linking to and quoting from an article on AlJazeera which calls them 'the callous cretins who kill'. I'd say that LI deals with about one in 10 clear transgressors when reported. I would have made enemies there too.

Why do this on a site which is supposedly for business contacts? Because I believe it's all connected. I do the work stuff there too, the shop-window 'look at this' links to reviews and blog posts, as well as the support for musical organisations when their posts come to my attention. And I value the exchanges I've had on LI, how much I've learned from what other people draw attention to.

At the same time it's taking concentration away from a lot of what I should be doing (like writing Volume Two of my Prokofiev biography). I have the emails of some of the people I value on there, so we can stay in touch. Am I going to try and get back in when the LI stasi don't even give a reason for the dismissal? No. Submit passport details? Really? No thanks*.

So it's goodbye to the only form of social media I use. I find myself quite indifferent about no longer being able to access the site; but I'm furious that some political bully has forced me off. Let's see what my pals proceed to do on there - they'll let me know.

*UPDATE (17/10) - my LI friend Willemijn Heideman suggested a simple form I could use, bypassing the document-furnishing**. And now, having been kicked off with no explanation, I've been reinstated with no explanation. As I commented below, I won't be using the site much, if at all.

**It turns out that didn't get me back on as three days later I was asked to give a screenshot of the issue. Possibly canvassing on the site linking to LI did it for me.

Hi David, yep Linked Inbeciles seem to be pro: Tory Corruption, Tory Treason, Right Wing Politics, Zionism, Antivaxers, Conspiracy Theorists etc etc.
They sure are against: Social Justice and Rationality.
I am now only on FaceBook - https://www.facebook.com/cezary.marek.9/
This however has limited reach.

Good to hear from you, Cezary. Your email address failed yesterday, so glad you popped up here. I've never 'done' Facebook, and there's more reason than ever not to now. Keep in touch. Maybe one day we'll meet up with Paavo J in Notting Hill!

That's ridiculous. Linked-In is clearly into the worst of Toron coddling.

Doesn't give a damn about potentially fatal anti-vaxxer disinformation either. Even Facebook has made some moves towards cleaning up its act there. But when LI did nothing about either the profile or a post of an insane American lady who claims that 'ventilators are creating genocide', you begin to wonder what's going on.

Complicated.. Did you decide to remove your profile or did the company evict you for "inapropriate" comments?

Perhaps Linked-In is actually being run by far-rightists. In which case all good people should shun it.

Liam, the post tells all. They evicted me, but it now seems I'm reinstated without explanation. Not complicated, but faceless. I won't be using it much again, if at all. And wanderluster, I do wonder - I hope proper research can be done. One regular user thought Murdoch had bought it, but on what basis, I dpn't know.

avoid the nebulous dark forces of socialmedia ,an unnatural concept.

It's a two-edged sword. You can get a lot of important information out there, but know that you're serving the profits of the company involved. There's no such thing as free social networking.

It's not as simple as that, though, is it? I have never used Facebook or Twitter; LinkedIn has enriched my life through some of the folk I've met on there, but it needs to be better and we can drive that change. Actually I shouldn't be using Google for my blog either... We weigh up what the (never quite) free service can do for us as against what it can do to us.

i use it Lindedin to chat privatly via message with friends in thelibrary world. Very good . But not for comments on world events

So you use it, period. By your own logic you shouldn't.

only for the message with friends not for views about theworl or politics which do not interest at all . Private messages just.

No exceptionalism - you use it. And there is no such thing as an entirely free service.