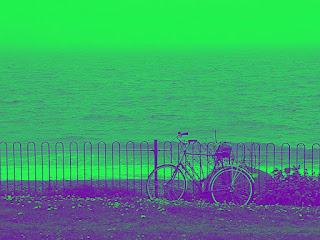 It was our friend Paul Ryan who, when J said we were briefly renting a place in Dalkey by the sea, c.12km south of Dublin city centre, handed over his copy of Flann O’Brien’s The Dalkey Archive as essential reading. Thus began a strange journey which has so far taken me deeper into a singular kind of Wonderland, a dreamscape with nightmarish elements and so many parallels with the successful realisations of Neveux’s play and Martinů's opera Juliette, or The Key to Dreams, much on my waking and sleeping mind when we studied the musical masterpiece last year. And more than dreams, in all cases; for what can be more boring than when someone divulges the randomness of sleep images?

Beyond the first chapter, where the Vico Road and the bathing spot beneath it figure significantly, neither Dalkey nor any of the other Dublin settings loom very large (though that opening page IS pertinent to our immediate vicinity). 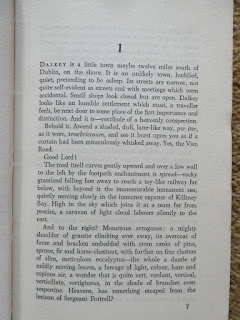 The oddities are initially parcelled out between the opinionated and possibly dangerous/insane de Selby and two potential acolytes, brusque drinker Hackett and confused truth-seeker Mick, who turns out to be the main character. The girlfriend to whom he's none too committed, Mary, is the only sane person in the novel (and I’m assuming from his difficult character that the misogyny is Mick’s, not FO’B’s). The comic coup is saved for the arrival on the scene of the loquacious and fantastical Sergeant Fottrell. An underwater interview with St Augustine is counterbalanced by several more with James Joyce, who’s turned up alive and well working as a barman in another seaside resort, Skerries, this time north of Dublin. 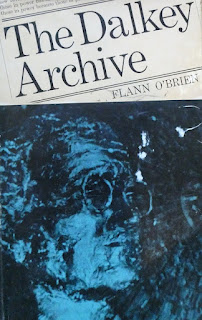 The reading was addictive, and as I neared the end I was hungry for more O’Brien (real name Brian O’Nolan, born 1911, died on April Fools’ Day 1966); the Lord be praised that The Gutter Bookshop in Dalkey had a copy of The Third Policeman, Which is altogether more nightmarish, more hallucinatory and much more preoccupied with landscapes, and what man may or may not have injected of him (or her, but mostly him) self into them. The metaphysical aspect is even more pronounced, the sudden swathes of melancholia and self-doubt similarly lending gravity. Yet there’s a whole chunk I’d already read, the policeman’s disquisition on the interchange of human and velocipedal attributes due to the exchange of molecules. 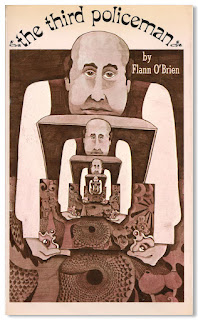 Why? The answer is quite simple, but fascinating. O’Brien’s first novel, At Swim-Two-Birds, was published in 1939 at Graham Greene’s recommendation, and praised by both Joyce and Beckett. The Third Policeman was rejected on the grounds that ‘we realize the author’s ability but think that he should become less fantastic and in this new novel he is more so’. His third novel, The Poor Mouth, came out in Gaelic and then there were the daily columns of wit and fantasy in The Irish Times as ‘Myles na Gopaleen’ – as a secretarial civil servant O’Nolan could never use his own name in print – but no more novels until The Hard Life in 1962 and The Dalkey Archive in 1964. In true Mylesish fashion he spun various stories about the fate of The Third Policeman but it only came back to the surface after his death. 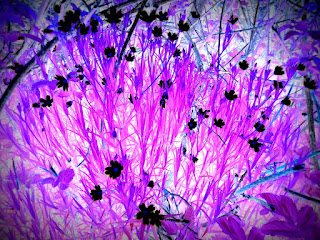 I’m sure there have been scholarly articles on the complex relationship between The Third Policeman and The Dalkey Archive; but, that central velocipedal episode excepted, the witty exchange of non-appearing 'classic' (or prolific lunatic?) De Selbey with lower-case maverick de Selbey and the theft of a black box from a big house, the correspondences are more subtle. The later work is the one which will have wider appeal; the earlier is one I want to re-read almost immediately, because so much becomes clear at the very end. I’m glad he didn’t give it the alternative title he proposed to the Americans – I won’t mention it here – because that’s a real spoiler. But the book is bigger than that – just in Juliette, crucial questions of memory and what happens when we lose it, the proximity of dreams and death, the search for something that may not even exist, are vital. I’m hooked.

As for our Dalkey fastness, Dublin suburbia – some of it pretty – continues south until, essentially, Sorrento Point, from which we had a terrific early evening view of the island with its chapel and Martello Tower 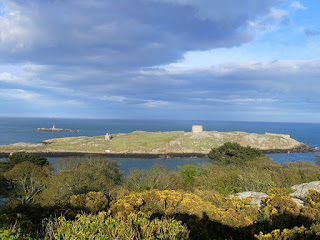 and the lighthouse beyond, 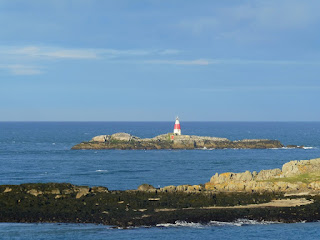 and – on our first full day, which offered a sunny afternoon, views from wonderful Dalkey Hill south along Killiney Bay to the Wicklow Mountains 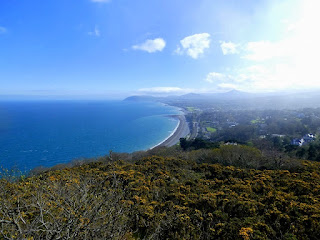 and back to Sorrento Point and the island. 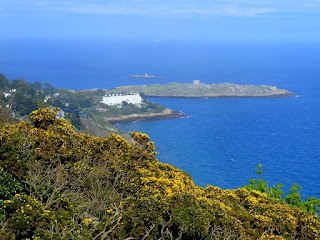 An easy walk north the next day took us to Sandycove and the Martello Tower where ‘Ulysses’ begins. But I’ll save the already overwhelming Joyceana for another entry.
Posted by David at 21:52

I hope that you are settling in well.

Well, I could very happily settle in on the coast, but soon this little holiday comes to an end. At least I know I'll always be pleased to return. Now, houses in Dalkey - that would be grand, but the average price seems to be about a million euros....and the Dublin area is through the roof pricewise.

Yes prices are very high as is the general coastal living. Avoid

Well, you know, if we could afford it, I'd think again. I have a yen for one of the single-storey villas in the roads leading down to Sandycove. The idea of swimming in clear waters first thing in the morning and being in the centre of town half an hour later very much appeals. And we shall bathe in 'the 40 foot' before or after the reading of 'Telemachus' from the top of the Martello Tower at 8am on Bloomsday...in short, I have fallen in love with certain aspects of Dublin.

Liam, it has to be said - you always seem to find so much to hate and dislike. No doubt those things are true (though London is a much dirtier, more aggressive city if you focus on that aspect). J will live with me, of course, where do you think? And I'm not worried because I don't frequent darts tournaments (yes, I know what you meant).

Now try, just try to focus on three things you like about Dublin. It must be possible.