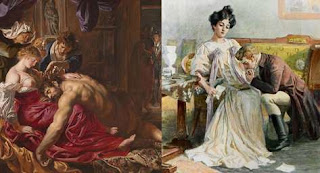 It was Richard Jones, unlikely choice to direct the forthcoming Royal Opera production of  Saint-Saëns's Samson et Dalila, who finally persuaded me that I ought to go for it as the first of the summer term's Operas in Depth. I know I can circle around it entertainingly; but will the Biblical drama itself offer much meat? We'll find out later this month.

At least there's an interesting contrast with Tchaikovsky's Eugene Onegin, the much more familiar second choice. The operas were written around the same time in the 1870s by two gay composers who enjoyed each other’s company. Even so, Saint-Saëns’s grand spectacle, with its big choruses and exotic ballets, was exactly the sort of operatic hokum Tchaikovsky wanted to escape from in his ‘lyrical scenes’ based on Pushkin’s verse-novel about very real people. The most famous set-pieces in both opera tend to belong to the women: Dalila’s two great arias, and the scene in which Tchaikovsky depicts the infatuated teenage Tatyana writing an ill-fated love-letter to dandy Onegin. 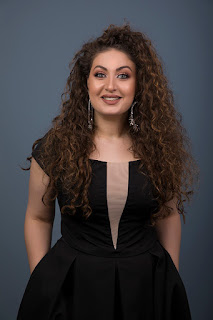 I'm delighted that in addition to Richard, who's promised to come along after offering his usual off-piste observations on Britten's Peter Grimes last term, we'll also be joined by the Tatyana of Opera Holland Park's impending Onegin, charismatic Armernian soprano Anush Hovhannisyan. The tradition of special guests, which has been so fruitful online since the start of lockdown, has featured appearances from, among many others, Ermonela Jaho and Antonio Pappano for Puccini’s Madama Butterfly, and Felicities Palmer and Lott for Britten’s Albert Herring.

After an introductory session for context, we'll be following the course of each drama with excerpts from a wide range of recorded performances on CD, DVD and YouTube.Admission fee is a snip - £100 for the whole term of 10 two-hour classes, Mondays 2.30-4.30pm from 25 April. If you can't attend live, I'll send the video the next morning. Anyone interested should contact me: david.nice@usa.net. On Thursdays I'll be running a course on Sibelius's symphonies and tone-poems,  but I'll post separately about that.