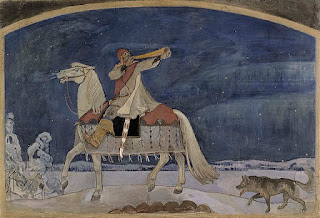 After four in-depth Zoom terms on Russian music, one on the Czechs and the most recent on the Hungarians, I decided that Finland had to be next. And while there are plenty of other fascinating musical voices, the name of Jean Sibelius towers above all others. While he only started learning to speak Finnish aged 9 at one of the country’s first national schools – Swedish was his mother tongue – Sibelius’s musical consistency is absolute, from the early masterpieces of the 1890s through to his turning away from all major works in the 1920s.

We’ll be following the adventure from its bracing start - including the programme symphony based on the exploits of one of the many ill-fated heroes in the national epic the Kalevala, Kullervo (depicted above on his way to war by Finland's greatest 19th centurty artist Akseli Gallen-Kallela, like the portrait-plus below, hanging in wonderful house-museum Ainola) through to the supreme concentration of the Seventh Symphony and Tapiola, with excursions to the music of other Finnish composers both contemporary with Sibelius and of later generations. 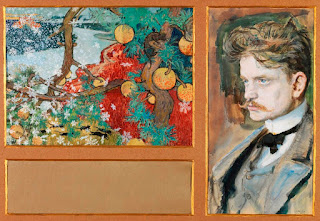 Hopes are high for the kind of special guests who’ve been a feature of earlier courses – among them conductors Paavo Järvi, Vladimir Jurowski, Antonio Pappano and Robin Ticciati; pianists Pavel Kolesnikov, Alexander Melnikov, Steven Osborne and Samson Tsoy; violinists Alina Ibragimova and Josef Špaček; and harpist Jana Boušková. Certainly I'm wondering if the exceptionally busy Klaus Mäkelä can be persuaded to come along again after his energetic contribution to a Bartók class just before I heard him conduct the suite from The Miraculous Mandarin in Oslo. My rave for his new Sibelius symphonies set with the Oslo Philharmonic, now incontestably one of the world's top orchestras, should be out in the BBC Music Magazine soon. But there already fine cycles to choose from, including those by Berglund (twice), Järvis Neeme and Paavo, Kamu, Oramo and Saraste. 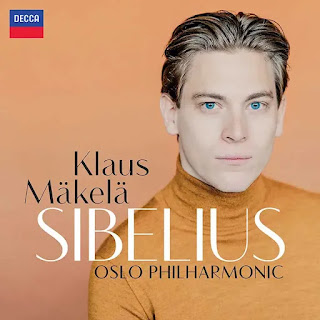 A wide range of works will be illustrated with excerpts on CD, DVD and YouTube. We begin next Thursday (28 May) at 2.30pm with the first of 10 two-hour classes. You don't have to attend live - you can received the video the day after. Either way, the fee is a modest £100 for the whole term (not bad at £5 an hour - and often we take the luxury of running on longer if the case, or the special guest, so demands). Email me at david.nice@usa.net ASAP to confirm a place

Thoroughly enjoyed our first class and am really looking forward to what's ahead. I commend it to everyone!

Thanks, Sue - admit I had a little help from a young Esa-Pekka Salonen electrifying all concerned in a filmed performance of 'Kullervo' (we watched the dramatic third movement at the end). If anyone's still interested, you can catch up on the video of the first class before the next.

That concert was a great find on your part. Terrific way to close our first session.