Bach according to Gardiner 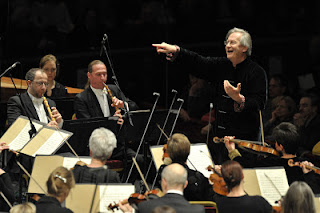 Monday was a day for finally meeting extended deadlines after much gadding about, so I couldn't attend the Albert Hall Bach marathon brilliantly masterminded by the nearly-septuagenarian John Eliot (photographed in action above and further below by the ever-dependable Chris Christodoulou). But his Easter cantata recordings have been a constant presence in my own, much slower listening marathon this year so far, and earlier in the week we caught up with his BBC 2 documentary Bach: A Passionate Life.

The title may seem a tad lame, but JEG delivered what he promised, contradicting the image we know so well of the rather stern, bewigged 61-year-old with a wealth of fiery, inspired excerpts - and not always the expected ones - from a cornucopia of masterpieces. Gardiner's father, by the way, used to own what may have been a second version by the artist Elias Gottlob Haussmann of the famous portrait, since bought by an American. 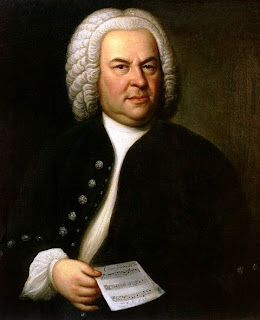 I was not so well versed about Bach's life as to know, for instance, that he was flung into prison at the end of his Weimar time. Oh, those tyrannical patrons! At least he wasn't executed, like other musicians. We learned how his difficult, even paranoiac temperament was formed by major family bereavements in his youth (a psychologist popped up, sometimes stating the obvious). JEG's chilly ambles around snowy towns gave a good sense of each, especially Eisenach with its castle where Luther had earlier walled up. 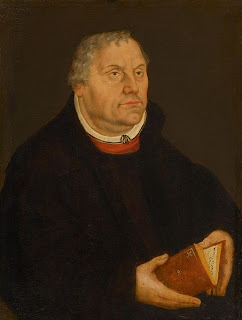 Above all, what a difference to have a presenter who knows in depth what he's talking about (and I'm not talking about hugely irritant, self-admiring and patchily knowledgeable telly regulars like Andrew Graham-Dixon, who started out so well but has become unwatchable, in my eyes at any rate). This, though it could have extended to at least another episode, was up there with Antonio Pappano's Opera Italia - and more recently John Adams as eloquent speaker had the lion's share of Mark Kidel's also too-brief portrait. 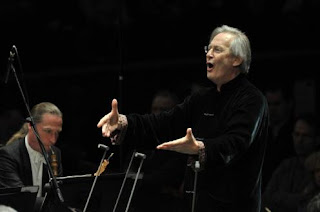 You'd not actually know from Gardiner's demeanour here that he raises the blood pressure of many a performer (I know two who won't even let me mention his name in their presence, and there's an unsavoury joke or two floating around). He interacts keenly with talking heads from other fields, some perceptive, some less so. He brings helpful details and images to the performances with trusted musical friends, though we still never get a piece from start to finish. Kati Debretzeni gave us some phenomenal violin playing, and I liked the smiley approach of soprano Julia Doyle. There's no doubt that Bach's his God, as he should be every sentient being's. 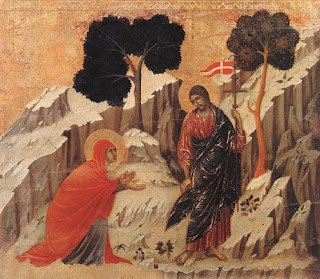 As his extended note on the Easter set of his Bach pilgrimage reveals, Gardiner is especially passionate about the all-choral Easter Sunday cantata (let's follow Duccio altarpanels for the three celebratory days). 'Christ lag in Todesbanden', BWV 4, is a pre-Leipzig masterpiece - Bach composed it for his probationary audition at Muhlhausen in 1707 - and the first I've come across to be written entirely for choral voices. The narrative is not about the resurrected Jesus appearing to Mary Magdalene in the garden, that scene so movingly set by Adams in The Gospel According to the Other Mary. Instead Bach sets all seven verses which Luther wrote to the old hymn, dealing with the struggle that's already taken place, and so there's little of the expected Easter jubilation.

E minor dominates. The composer's identity pops up as the violins leap free towards the end of the opening Sinfonia. The choral writing is stunning and extraordinarily varied. Gardiner makes much of the semitonal wail Bach fashions by altering two notes of the original hymn, and I love the 'syncopated riff' that bursts forth on the 'Halleluja's in verse one. Gardiner is right to invoke the atmospheric austerity of Bergman's The Seventh Seal as Luther narrates a time when Death held sway and Bach matches the chill (sopranos and altos, verse two). Christ's rout takes time and is splendidly physical; then in verse 5 the basses play priests, their line culminating in a long-held top D, after which exultant and dancing delights mark the victory - but still, at the end, in E minor. Here's Harnoncourt's recording on YouTube.


There's not much to say about the Easter Monday and Tuesday cantatas. Both 'Erfreut euch, ihr Herzen', BWV 66 and 'Ein Herz, das seinem Jesum lebend weiss', BWV 134, were presented as part of Bach's first Leipzig Easter of 1724. He had laboured on the mighty St John Passion for Good Friday, and revised 'Christ lag in Todesbanden' for Easter Sunday. So it is understandable if, given the jubilant tone of the continuing celebrations, he simply adapted two secular works written during his time in Cöthen under the benign (and significanly non-Lutheran) Prince Leopold. 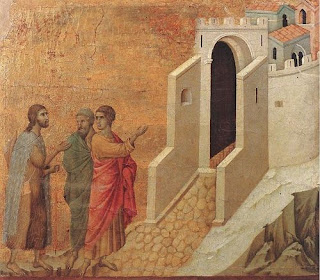 BWV 66, for road-to-Emmaus day, was originally a birthday serenade, with the allegorical figures of Happiness and Fame transformed here into Hope and an initially craven, finally self-transcending Fear. There's plenty of brilliant, 6/8 dance music for alto and tenor. Ditto in BWV 134, its first incarnation a New Year piece of 1719, where the tenor gets another movement Gardiner describes as 'Passepied-like', and - a bit of irreverence here - amuses with the bark-like as well as Bach-like refrains of 'Auf, auf!'. Duccio shows us the day's theme of Christ appearing to the Apostles (it can't be the Last Supper because Judas is absent). 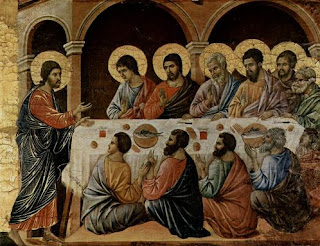 Gardiner points out the 'Brandenburg-like swagger and rhythmical elan' of Bach's midway duet (the six great concertos as well as the other major orchestral and instrumental works were also written during his happy time with the Calvinist prince, if not all specifically for Leopold, of course). 'Those years in Cöthen seem to have been the happiest in Bach's life'. Amen to that. Here's Leonhardt for 'Erfreut euch, ihr Herzen'


and Rilling for 'Ein Herz, das seinem Jesum...': far from ideal, but the only alternative had Rene Jacobs as the alto, and do you know how awful he was? Not much better as a conductor, IMO. Anyway, this also gives us Piero della Francesca's wonderful depiction of the Resurrection, which I've still to see in out-of-the-way San Sepolcro.


Our Easter music came courtesy of the choir and splendid (uncredited) organist of Chichester Cathedral. The Saturday evening service was remakable less for the mass setting and anthem -  Flor Peeters' Missa festiva and Messiaen's O sacrum convivium - than for the telescoped vigil-variation on the Orthodox darkness to light theme: we began in pitch black, the choir lit their candles, we lit ours and later the lights blazed on John Piper's fabulous altarpiece as glimpsed through the 15th century screen. The commission of the first and the replacement of the second were the work of Chichester's most inspirational dean, Walter Hussey, about whom I must write more at a later date. Photo taken, I hasten to add, after the service. 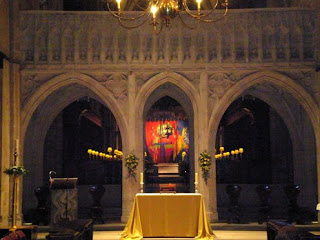 The balance of first-class contemporary artwork - if 1966 can be called 'contemporary' - with the old tuned in nicely with a sermon to which I listened for once. The theme was how the Gospels begin with elderly people -  Elizabeth, Anne, Zacharias, Simeon - waiting for a change, until by the time of the Resurrection the new generation surrounds the risen Christ. 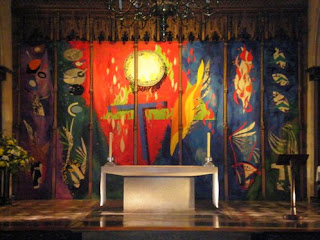 Our hostess Themy, whom I joshingly refer to as 'a Christian in Parsee's clothing', found me some more short, clear sermons to read by a man of the greatest common sense and humility, Eric James, a major guiding light for her but sadly no longer with us. Don't misunderstand me: my agnosticism remains the same, but I warm to essential Christian wisdom when I can find it. 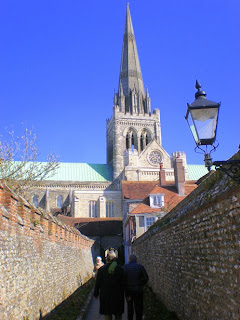 Sunday's Eucharist, to which we are heading in the above picture, revealed one of the best masses I've ever heard, and never knew before  - Kodaly's Missa brevis: did that man ever write a dull piece? - and a resounding triumph for the organist, who rounded off the previous movements from Vierne's Second Symphony with the dizzying jubilation of Bach's G major Prelude and Fugue. So we came full circle to the god of music again.
Posted by David at 13:35

Well, of course your title caught my eye, both alerting me that this would give me a least a glimpse into the program I wasn't able to see, and also the phrase "the gospel according to," which of course calls to mind Adams' piece. I can't remember the last time I attended a church service, and doubt I will do so again, so was amused particularly by this: "a sermon to which I listened for once, pointing out how the Gospels begin with old people waiting for a change, until by the time of the Resurrection the new generation surrounds the risen Christ." I'm not sure what it signifies, but the sermon's deliverer did seem to have a nice sort of dry humor--or is it your paraphrase in which I'm catching that? So, here's to A for Adams and B for Bach, glorious Bach.

In the context of Bach's imprisonment in Weimar, one must remember that the ruling princes in those days were absolute. As Frederic Wilhelm I King in Prussia said " The immortal souls of my people belong to God. All else is mine"

Sue - when you make it again over here and we finally meet, I hope you'd come with us to an evensong or two: it's all about the music, and the lovely reflective time of day, and of course there's neither a sermon nor a communion sequence where we sit tight in our pews while everyone else goes up for the blood and the bread.

The surprisingly good, naturally-delivered sermon by, the order of service tells me, 'the Reverend Canon Russell Bowman-Eadie, formerly Canon Treasurer of Wells Cathedral, made some bold digs at a congregation of grey heads, but I'm not sure there was much irony there. Anyway, the idea had never struck me before (not that I spend much time in contemplation of the Gospels).

David - another saying to remind us not to be soft in reflecting on patrons of yore.

A propos your comment that there are those who have performed under JEG's baton who cannot now discuss him calmly, this appears to be true also of many of those who have worked for him in administration etc.They are now numerous and scattered, but I proposed some time ago that they should form a society, called the Old Eliotonians. And maybe have an annual dinner

I hope JEG himself would be the first to find it funny that the Old Eliotonians' revel might take the form of a Black Mass, schwarz-Bach style, with devilish chorales set to pagan words of revenge and all sorts of weird passepieds. Or it might just be as childish as a face on a dartboard...