Pictures from a presentation 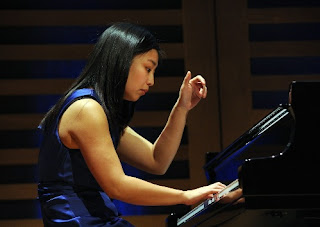 Awards ceremonies are always best approached with circumspection – not difficult in this case, as I hadn’t heard a single one of the ‘winners’ in the BBC Music Magazine’s final list for 2013 – and then you can only be pleasantly surprised.


As I was on Tuesday afternoon. I’ve written up the event for The Arts Desk, homing in on what most interested me. The three strands of live performance were bound to take the lion’s share, yet there was no contest from Janina Fialkowska and even the charismatic Angelika Kirchschlager; Mei Yi Foo swept us all away with the canny choice of pieces by Gubaidulina, Unsuk Chin and Ligeti from her Best Newcomer award-winning disc ‘Musical Toys’.

She was snapped brilliantly by the BBC Music Magazine’s photographer, John Millar, both in action (above) and alongside some of the splendid Kings Place artwork (the shot I used over on TAD). I thought Millar’s top shot was of Jacques Imbrailo, Mark Padmore, Foo, Berlin Phil cellist Olaf Maninger and the so compelling-to-look-at Kaija Saariaho (a thoroughly sincere person always willing to give of her time, as I know from a short acquaintance). I used it over there, but I can’t resist including it here too 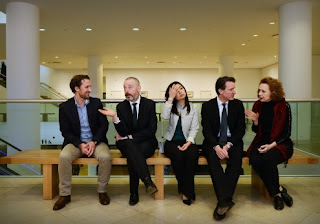 especially as it’s followed by formality, with Janina Fialkowska joining the picture. 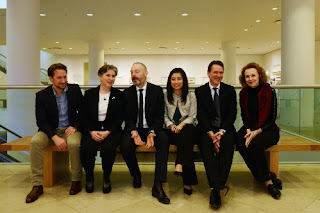 Several other photos I couldn’t accommodate, or they didn’t tell the story I wanted. One is of Tony Hall and Sir Mark Elder head to head 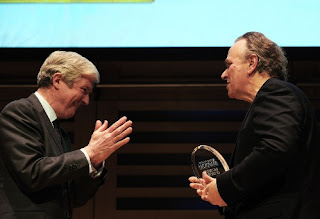 before S’Mark swept the board with his Halle recording of Elgar’s The Apostles. This too I have yet to hear, but I didn’t much care for the same team’s The Kingdom, nor indeed for S’Mark’s Goodall-in-Wagner approach to Elgar, who always seems to me to need much more sweeping along, especially in oratorios like these. But we’ll see.

A few more photos: here’s Mark Padmore looking moved, as indeed he was, talking about Bach as a lifelong companion and the uncanny inspiration of Peter Sellars. 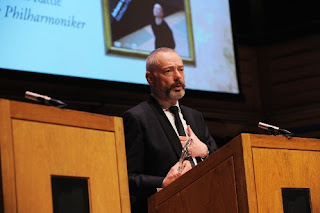 And composer Dai Fujikura, interesting sound-maker in the concert I caught of the BBC Symphony Orchestra’s Japanese day, quirkily setting up Foo, whom he obviously admires. 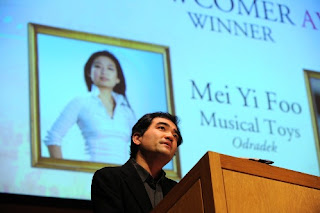 As for ‘Musical Toys’, I thought it might just be through her canny choice of repertoire that Foo triumphed, but having listened to the disc a couple of times, I hear so much imagination in the distant voices of the Gubaidulina, while the Chin is technically terrific, and you should really try out the later Ligeti pieces when the notes of the chromatic scale begin to accumulate (he starts with one, ends with all twelve).

It was serendipity that the first unknown personage I was led up to, via the constantly popping-up Sebastian Scotney and David Fraser of ECM, happened to be the founder of Foo’s intriguing new label Odradek and also a pianist, John Clement Anderson. He lives in Pescara and so – with him, I’m presuming – does one of the other pianists featured on the label, Pina Napolitana from, yes, Naples, whose all-Schoenberg disc I need to hear at leisure with a score. Already, though, I’ve been hooked by another featured artist, Domenico Codispoti. 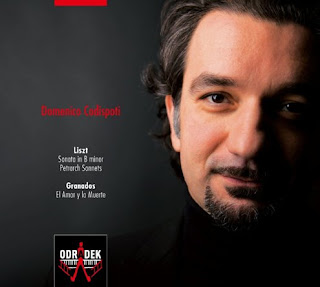 His Liszt B minor Sonata was bound to feel just a little straightforward with Khatia Buniatishvili’s crazy interpretation still ringing in my ears, but he’s clearly a real poet, as the Petrarch Sonnets clearly show. And what’s haunting me is a Granados piece from Goyescas I’m ashamed to say I didn’t know, El amor y la muerte. This is the image, from Goya's Los Caprichos. 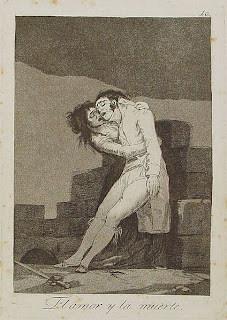 The ‘ballad’builds around Goya's moment. A young man is dying in the arms of his beloved after losing a duel. The strength of the will to live ebbs and flows alongside the woman's sad consoling song, which breaks the heart before the final darkness falls, at least in this performance. Such profundity. If Odradek carries on at this level, it should have a few more award-winners on its hands. How delighted I am to find that the company has put up a film of Codispoti playing this very piece. Give it your full attention; and if you don't, you'll probably find as it develops that you drop anything you're doing.

I suppose that the level of appreciation of ( to take for now) paintings is very personal. For example I see Rembrandt as far ahead of Rubens. Nevertheless Goya speaks directly to me. Even when he is in one sense making rather obvious points ( such as the horrors of the war, or in the dying man you show) he reflects the deep feelings of the human heart so completely. And also, I think that if I meet him in the Elysian Fields I will be able to have a conversation with him, not perhaps so possible with Rembrandt.

I couldn't agree more, David. Now, listen to the piano piece and tell me if it doesn't speak to the depths as Goya does. I was quite taken aback. As indeed I just have been - though I already knew this - by the sweet profundity of Poulenc's Gloria in a superb performance last night. Granados needs further investigation alongside Poulenc.

I had already heard the music and agree about speaking to the depths - though possibly not quite to the extent that you do. I will listen again

Do you think that the piano was appropriately tuned? OK for Rachmaninov but not for everything? Or am I just getting neurotic about the Steinway style?

Not exactly sure what you mean by that. I noticed that the instrument in the film was of Italian make (and not Fazioli). One thing that's almost obsessing me and disrupting my enjoyment is that twang you get - always on the Wigmore Steinway, and a little bit here - when releasing the sustaing pedal on a chord. Few pianists seem to avoid it.

Hi David and David,
First of all thanks for the great article and enthusiasm, it means a lot that we have listeners, especially happy ones!
The piano in the Granados film is a Steinway model D, from the Fabbrini collection (he was the technician for Michelangeli, and still today, for Pollini, and continues to provide the instruments and technicians for many of the top tier musicians as they globe trot). The tuning may have suffered some from the severe bouts of heat and air-conditioning, and having just heard the Liszt sonata... But in general, I am quite happy with the basic "shape" of the tuning.
Thanks again!
John Anderson

Many thanks for the clarification, John. I was thrown by seeing 'Fabbrini' on the side of the instrument. Looking forward to the next instalments.

Well, clearly, I need to carve out a solid space of "good listening" time for all this. It's been a long while, particularly, since I've listened to much music for solo piano, though years ago it’s what I reached for first.

In that regard, a very long time ago I picked up a CD of Alicia de Larrocha playing Goyescas. I don't know what made me pick it up, but I remember loving it, and as I listened to the Codispoti video, I see that El Amor y Muertes was a very big part of why. It would be interesting to play the performances by de Larrocha and Codispoti side-by-side, I suspect.

Musical Toys jumped out at me when I received notification of the awards—for one, I'm seriously Gubaidulina deficient, though she's long been on my to do list. Just from your Chin video, Foo does seem remarkable. The bar for performance gets higher and higher as time goes on, doesn’t it?

It's very uncharacteristic Gubaidulina, in that I think of her as deep, serious and infused with spiritual, if not downright religious sensibility. Having just done a Salzburg note for the violin-concerto Offertorium, I'm haunted by those resonances (Gidon Kremer is one fabulous interpreter; Anne Sophie Mutter for In tempus praesens is another) These pieces are in that fine Russian tradition of music for children, perhaps a little difficult as such.

As I've just waxed in a comment above, Mei Yi introduced us to more extraordinary musical toys tonight. The Lachenmann is still ringing in my ears.

De Larrocha is probably peerless in Goyescas - I only know her Albeniz, Falla, Mozart and Ravel.