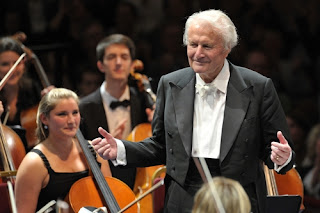 The Guardian obituary I wrote on Sir Colin Davis is up and running online, so there's not much to add other than to note a few personal favourites among his performances, with a couple of photos from his last Proms season sent to me by the ever-marvellous Chris Christodoulou. Don't you just love the happy-respectful look above on the face of the young cellist from the Gustav Mahler Youth Orchestra? It's the perfect emblem of Sir Colin's unstinting work with budding players. And here's one from the very grown-up Beethoven Missa Solemnis he conducted that same summer of 2011. 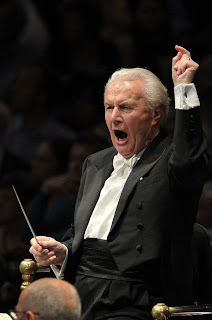 We're assembling a line-up of tributes citing chapter and verse on The Arts Desk (16/4: it's now appeared with a roster of great names to draw attention away from the obsequies of a less universally loved and admired public figure), so I'll leave it at two first choices. Probably the tops for me among his live performances was a Bavarian Radio Symphony Orchestra Proms performance of Beethoven's 'Eroica': standing in the arena, I could feel a bizarre sense of physical elevation, as if my feet were about to leave the ground . Next best thing on CD is the relatively early Beethoven 7 he recorded; I think it was my first experience of that dance-apotheosis.


The recording I finally took off the shelves to play today was the Dresden studio recording of Humperdinck's Hänsel und Gretel. What a dream cast: Edita Gruberova, Ann Murray, Gwyneth Jones (as the mother), Christa Ludwig (as the witch), Franz Grundheber, Barbara Bonney, Christiane Oelze. The whole thing just glows with that mellow Staatskapelle sound; to begin with those horns is quite a treat.

Sadly there don't seem to be any clips from the 1992 recording on YouTube. So I'll take the risk of sticking up the much more recent Royal Opera performance. It wasn't a production I especially cared for, and my idol Anja Silja is finally beyond the pale as the Witch, but you can just focus on Sir Colin conducting the Overture, which was my choice this morning. As for further listening, as Kenny Morrison in Dvora Lewis's office just said to me, 'there's a lot to celebrate'.

I don't think I ever heard a performance conducted by Davis live, and clearly more's the pity. You bring him very much to life in all its fullness in the obituary. I didn't have any idea his career and life were so turbulent, at least in the earlier years. Interesting the books that helped him through: Hermann Broch's Death of Virgil and Nikos Kazantzakis's The Odyssey: A Modern Sequel. Though I don't know them, but just looked up and dipped into the Broch, and it looks fascinating. Do you know either book? Also, in looking into it, I see he is the conductor for MacMillan's The World's Ransoming I've been listening to (and for which I have you to thank for introducing me, through your Arts Desk post on Adams's The Other Mary). How sad to lose him, and all the more grateful that so many recordings are available.

No, Sue, I don't know either book but this context makes me think, like you, I ought to read them (I've only read Kazantzakis's The Greek Passion or Christ Recrucified, which is very powerful. He's the Zorba man, of course).

As I wrote - tho' the Guardian originally ignored it, taking his rep only up to Tippett in the first subheading - he was a great MacMillan champion. I have the recording of the St John Passion sitting on the shelves; it didn't work for me in performance, but I ought to give it another try.

I hate to sound a sour note, but I've still not gotten over Sir Colin's harsh words about period instrument performance and its conductors, saying amongst other things "the way they play Baroque music is unspeakable...entirely theoretical" and having a swipe or two at some wonderful conductors including Roger Norrington. I know one grumpy comment can't overturn a lifetime of truly great music-making, and I couldn't live without (in all seriousness!) Sir Colin's Sibelius and Berlioz. But his words still stick in my craw, and temper my own personal hearing of his work now.

I can only agree with you on that one, Bruce. There was all the difference in the world between Sir Colin's last Mozart performances, very gluey and heavy to my ears, and Sir Charles Mackerras's, sprightly and always seeming to hit on the right tempi. And of course HE had taken on so many of the more valuable lessons of the authentic movement, and carried them into his work with modern-instrument orchestras.

Over on the Arts Desk tribute, the question of his slow tempi in baroque and classical works does crop up a couple of times from his fellow performers.

My own sour note: I don't know what he said about the dreadful Norrington, but I have a feeling I might have agreed. Sorry! I know Sir Roger moved it all forwards, but his massacres of Elgar and Mahler are far less forgivable than a few harsh words from Sir Col.