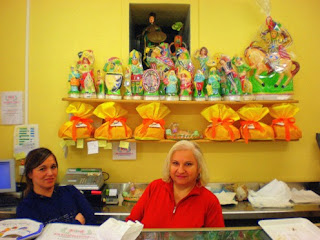 'Leave the gun. Take the cannoli', says the character Peter Clemenza over the body of a driver he's just had murdered in The Godfather Part One. In Part Three - much the weakest of the trilogy - Eli Wallach's Don Altobello dies from a poisoned cannolo while watching Cavalleria Rusticana at the Teatro Massimo. And what self-respecting mafioso could resist these delicious tubes of fried pastry dough filled with ricotta (usually candied)? The cannolo originated in Palermo, supposedly created as a kind of phallic symbol during carnival season. Photos of our consumption don't make for pleasant viewing, so I revert to Paolo Piscolla's Wikishot of the traditional cannolo. Surely the chocolate in the background is a step too far. 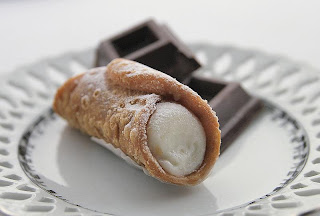 The best place to buy cannoli is at the very modest Rosciglione bakery in Palermo's toughest, most run-down but very characterful old town quarter, the Albergheria. 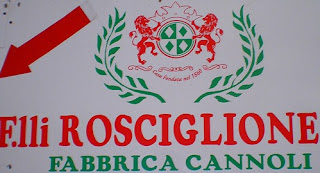 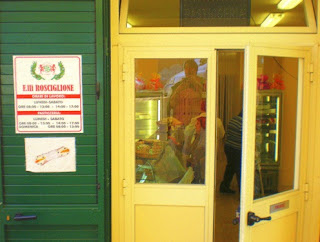 In fact, when we first visited, an Italian customer enthusiastically pointed out that the brothers Rosciglione's cannoli and other cakes are exported all over the world. On our second visit, the two delightful ladies up top were behind the counter - the one on the right, coyly blushing, had to be persuaded that she would adorn the picture. Wrapped-up easter cakes and chocolate sculpures sit on the shelves behind them.

Avoiding cheese for the most part, I had only a mouthful of cannolo and became addicted instead to the pastine di mandorla, almond biscuit/cakes like none I've ever tasted. J ate two cannoli and after a subsequent late, heavy lunch had to go and lie down. Mind you, we were both a little wiped out by our one day of sirocco.

Just up the same street, we came across a group of guerrilla gardeners, local neighbourhood greeners, call them what you will. 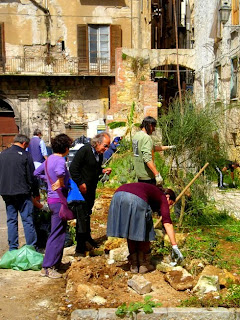 I was later chuffed to read about the grass-roots activism of the fabulous Letizia Battaglia, photographer-chronicler of the mafia over 20 years - two of her old pictures helped prove that the ghastly spider Andreotti  had actually met the capos in Palermo when he always denied having even gone there - as well as Green party representative on the city council and later parliamentarian. What a woman! 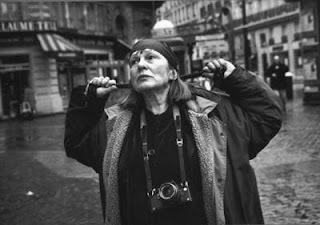 In Midnight in Sicily, Peter Robb goes off with Battaglia (image above by photopartner Franco Zecchin) on one of her trips with council workers to create green spaces in the heart of the crumbling old city. And here were people carrying on the same good work. When we returned to Rosciglione four days later, the garden included a shrine of sorts to Palermo's beloved Santa Rosalia. 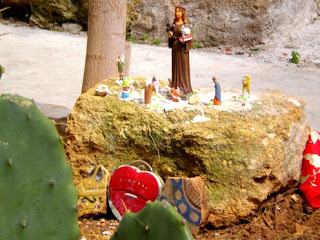 The Albergheria, which some think takes its name from the rulers of Sind known as Ap-Vallaraja because of the Indian spice traders who once gathered here, has more shrines than any of the other quarters. Here are another to Santa Rosalia 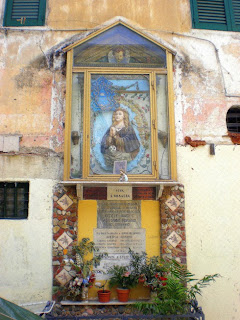 and down a street where I'd be very happy to settle, the Via Porta di Castro, a lovingly tended one to the Virgin. 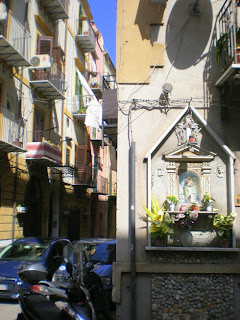 In marked contrast is the bronze statue by Scipione Li Volsi celebrating the victorious return of that anti-Protestant zealot Charles V from Tunisia in 1535. It stands on the edge of the Albergheria in Piazza Bologni. 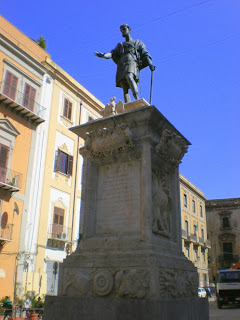 Palermitans have pride in the outstretched arm of the King and Holy Roman Emperor, without, I suspect, dwelling too much on his deeds. The marble pedestal by Cirasoli and Geraci with bas reliefs by Giovanni Tagliavia, moved here in 1631, has a many headed monster carved on the south-facing panel. 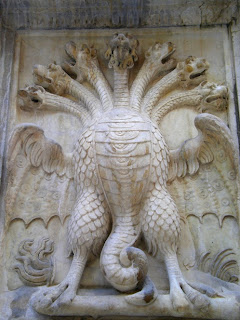 This turns out to be Charles's arch-enemy the 'Lutheran hydra' written about on the opposite side. 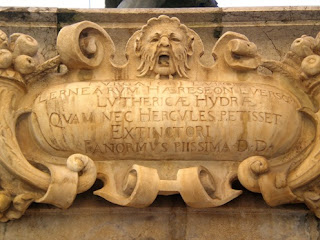 There was a fascinating parallel to this, which J saw and I missed, in the contemporary art gallery of Castelbuono's castle, in which the artist depicts those truly heroic 20th century pursuers of justice Falcone and Borsellino fighting the hydra of the Casa Nostra. Quite a different fable.

Piazza Bologni is currently a building site; there's a lot to do on the Palazzo Villafranca. A plaque records that on 27 May 1860, Garibaldi rested his 'weary limbs' here for a mere two hours. Needless to say, trenchant graffitisti (if there's such a word, if not I just made it up) have left their mark in the piazza with protests against, among others, 'ingrained paedophile priests'. 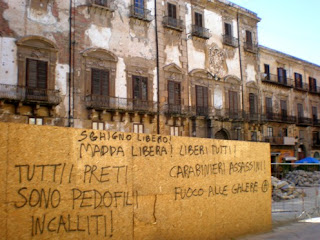 Round the corner is another spontaneous artwork. 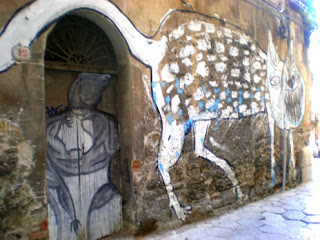 Many of the buildings in the Albergheria are in varying degrees of dilapidation, some picturesquely so, and some were clearly once very grand, including this one near Roscigilione, in front of which we stood and listened to a recorded carillon from the Torre di San Nicolò pealing out Schubert's Ave Maria 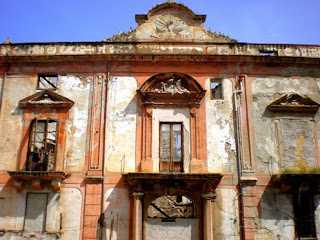 though no expense has been spared on the splendid Palazzo Sclafani constructed in 1335 by the count of that name. 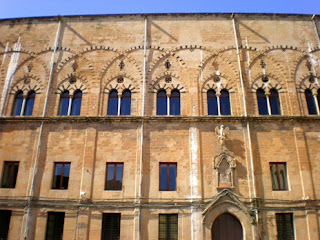 It subsequently underwent transformation as a 15th century civic hospital and a 19th century barracks. Today the military lodges here. The fine portal includes the Sclafani coat of arms and an eagle to denote the family's nobility sculpted by Bonaiuto Pisano. 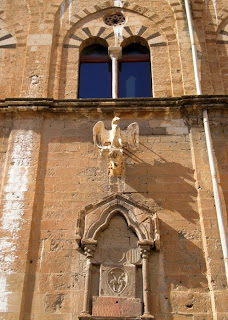 In less good nick is the church of Santa Maria del Carmine at the heart of the Ballerò market (no less atmospheric than its Capo counterpart, incidentally, but we've had enough market pics in the entry for that quarter). The predictably grandiose Jesuit Church was reconstructed, rather impressively, after its bombing in the Second World War, but that one's Palermitan baroque as usual. Few books or web entries have much to say about this rather more interesting, clearly much used building other than to note its majolica dome, seen here from the cloisters which seem to be home to some evangelizing organisation. 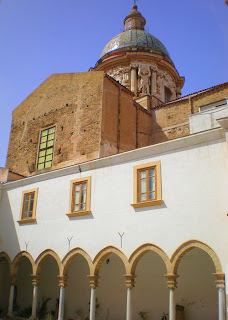 Santa Maria del Carmine has one glory, or rather a cluster of glories: the extraordinary if not exactly beautiful twisted baroque pillars with stucco work by the amazing Serpotta firm in the chapels either side of the high altar. 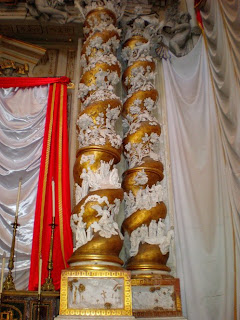 The Vucciria entry will be the time and place to wax lyrical about the Serpotta phenomenon in Palermo, but in the meantime the little 'theatres' we saw elsewhere are placed here at the foot of the pillars, around which are depicted Biblical scenes including an annunciation 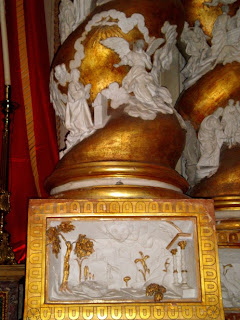 and more decorative birds and flowers. 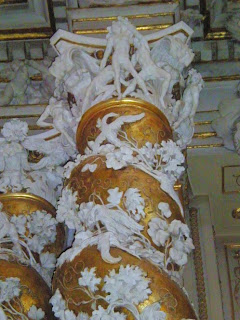 Napoleon said that it was not difficult to create a recipe for a battle, given a basic education in military science - the difficulty is in the execution. The same is true of culinary science, and the Italians can execute as the English cannot. The simple dishes you describe David were delicious since their creators were bred with the Italian instinct. We poor Anglo-Saxons can only be glad that we can eat Italian food, whereas if we were Italian we would have to learn English if we wanted to enjoy what the English are tops at, which is literature

Whopping generalisations there, sir, and I don't suppose Dante or Petrarch were anglophiles. But you're right, Giuseppe Tomasi di Lampedusa knew English literature better than most to us, and he produced what a second reading leads me gradly to declare is one of the greatest novels of all time, The Leopard (instalment long overdue).

Well, you can't beat that for a lede, and the rest of this installment of your Sicilian adventure is every bit as sumptuous as what's come before. I didn't know anything about Letizia Battaglia—she took on quite the assignment, photographing the mafia on its home ground. The Lutheran hydra is remarkable—the stucco work on the pillars even more so—and I like the way you weave into your tale the "low" art as well as "high." It's been a long time since I've had a cannoli, and those pastine di mandorla sound delicious, too. How I'd love to step inside that little shop about now, though we were able to console ourselves this evening (the Edu-Mate joined me for the day in New York) with lovely little key lime and pear tarts from a fine local bakery here. And speaking of bakery goods: we went to the Morgan Library today, where an exhibit of Proust mss and related items is about to close. What a fascinating exhibit, containing not only what seemed to be further definitive evidence that the Saint-Saëns Sonata for Piano and Violin is the source for la petite phrase, but also that in earlier versions of what is now the madeleine episode, the conjurer of memory was toast dipped in tea! How glad we are that he changed that, eh?

PS: Dalayman is indeed our Brünnhilde. Our Wotan isn’t Terfel, but Mark Delavan. We were all worried after Das Rheingold, but in Die Walküre, by all accounts (that is, friends’ ears much more versed than mine), he rose to the challenge. Our Siegfried is Jay Hunter Morris, whom I’ve seen in the HD of Gotterdammerung. I thought he was great then (he was pulled into the role, for which he was an understudy, in 2011), but of course I have no basis for comparison. I’m definitely in a sensory overload about now (on top of everything else, coming out of the Morgan, we stepped right into a Sikh New Years parade—the fabric colors alone were dazzling), but I have no complaints. It’s a wonderful life!

(If this is a repeat, just ignore, but I'm wondering if I failed to submit this properly, as yesterday's comment on the previous post has registered.)

Sorry, Sue, only just found the two comments on the site - they didn't for some reason hit the mail.

New York certainly can lay it on. I'm glad Proust changed his original memory, otherwise my quest for the perfect madeleine would never have happened (they are so difficult to make, apparently; we asked Maison Bertaux in Soho to make batches for a birthday picnic, and they failed...)

As for the Sikh procession, we have to go to outlying London districts for such things usually (ie Southall, where we caught a spectacular carnival of Hindu gods on floats). Nothing was more surprising, though, than the enactments in front of Cologne Cathedral of that extreme Muslim sect which entails young man whipping and cutting themselves until they bleed.

When was chocolate ever a step too far?

Susan, the story goes Terfel had had more than enough of that production; blog gossip of course and to which I can make no reference at all. So take it with a fat cannolo.