Dream, Screw and Serenade in Norfolk - 1 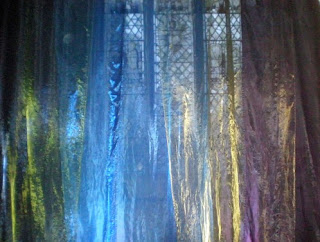 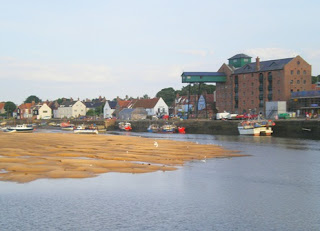 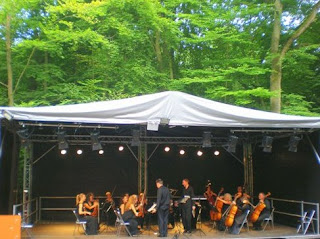 Britten's two spookiest operas and his exquisite songs of sunset melting into night had the most poetic settings imaginable the other weekend. I was up in beloved north Norfolk to talk about the connections between The Turn of the Screw and A Midsummer Night's Dream - they turn out to be more legion than I thought - in the intimate little Granary Theatre of old-fashioned Wells-next-the-Sea, pictured in the middle above. Seastar Opera's all-women cast with piano had joined, by serendipity, with Yorke Trust Summer Opera's full-scale production of Dream in one of Norfolk's loveliest churches, St Mary's South Creake (above), players and singers from all over the world working mostly for free on a course with a very splendid end.

The bonus to those, and the events connected with them, was to discover that the Britten Sinfonia would be at the Theatre in the Woods of Britten's (and Auden's) old school, Gresham's of Holt, with its amphitheatre canopied by beautiful beech trees - third photo - and that we could squeeze it in between walks, bathes and other performances.

First of the major trio up was Susie Self's Screw; though there was a treasurable warm-up act. That great double-bass player Rodney Slatford, driving force of the Yorke Trust and seen here in the South Creake chapel where the smaller happenings took place, 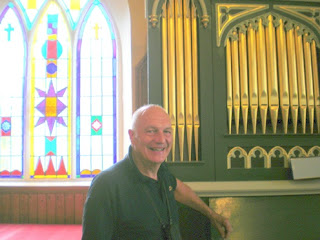 had arranged a number of events to educate us all around the Dream. So King's Lynn-dwelling friend Jill and I hurtled to South Creake to hear Rodney in very, very lively conversation with that unstoppable but never boring or self-regarding anecdotalist, director John Copley, and the more quietly amusing violinist Nona Liddell, both of whom had participated in the 1960 Aldeburgh Jubilee Hall premiere of the Dream. Stories that made us laugh are too countless to record - all should have been mp3d but sadly weren't - but Copley had his own take on why Mackerras became a Britten ghost (I'd heard another, but this is choice). He was there when Mackerras was rehearsing Screw with the tenor who'd taken over from Pears on tour. Quint was out of synch offstage - 'miles out, miles out' as Charlie shouted - and apparently couldn't find the peephole in the drapes to see his conductor. 'I can't find Peter's hole' he wailed. 'Lucky for you', snapped back Mackerras.

Anyway, our Quint was very apparent over at Wells in the shape of Susie, singing the Prologue before heading to the conductor's stand, and her stage double, co-director Marina Sossi. Britten and Piper's very present ghosts can be a problem, especially in a smaller space;  I'd have liked more play with lights, and the valiant scene-shifters were just as distracting in the interludes as I, the great Bob Ling and a fellow Hesse student had been at Aldeburgh back in 1983 (Myfanwy Piper found us very irritating). But on a limited budget, Susie's wonderful Michael Christie did an excellent job as Lord High Everything Else. Here they are together outside the Granary. 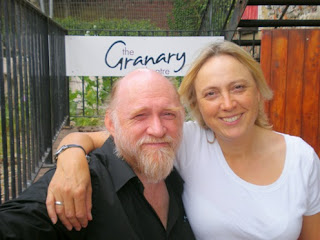 And as you can hear in the Woman's Hour excerpt, Susie makes a very compelling Quint singing at tenor pitch. 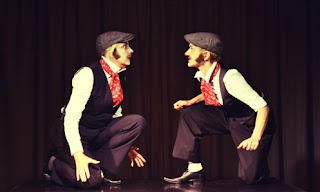 Our Governess, of two, was Nazan Fikret, not so long ago the most frightening Flora anyone's seen at English National Opera. Her voice has a piercing sweetness and her innocence was touching, though the hysterical fixity needed a bit more playing up in a second half where everyone adopted bright colours. The church scene worked best as theatre, with the children at 'prayer' before turning gargoyles. 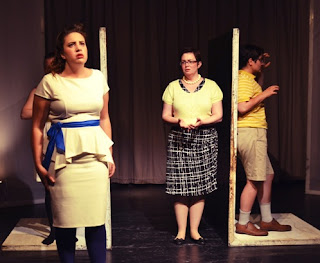 I suspect that just as you wouldn't have known Susie and Marina were women beneath that effective make up, you'd never know Eleanor Kramer wasn't a boy. Her 'Malo' was as touching as they come, her screams terrifying; again, only a bit more dramatic vividness as the screw turned wouldn't have gone amiss. The Flora (Alex Saunders, who took the two production photos) and Mrs Grose (Louise Mott) were impeccable, and we heard a big Wagnerian voice from Laura Wolk-Lewanowicz as Miss Jessel. Richard Black worked his socks off at the piano, but it only made you realise how specifically Britten, for all his wonderful pianistic skills, writes specifically for each of his 13 players.

Saturday morning was the talk, to a rather small but very participatory audience, followed by a round table in which I was specially impressed by the common sense and insights of Dream director Jennifer Hamilton. After our second F&C of the day, a later-arrived J went off to see the matinee while Jill and I walked out to the beach past the famous Wells huts/chalets (£60,000 a pop, can you believe). 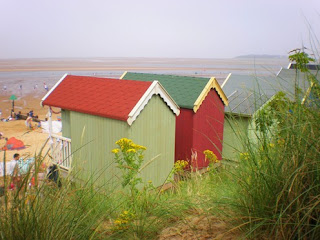 The tide, alas, had retreated beyond reach of swimming, a pleasure to be postponed until the following day, and a haar was rolling in.

The Holt experience provided further confirmation - as guitarist Dario von Gammeran's Friday afternoon performance of the Nocturnal after John Dowland had suggested - that so much Britten would benefit from the al fresco treatment. Several of the works from Jackie Shave and her nearly all-women strings I'd loved at the Wigmore pre-centenary Brittenfest last year. But the works with tenor were fresh, and Irish-born Robin Tritschler is a new wonder on the scene. I'm indebted to Rodney Smith of the Photographers' Gallery at Holt for this picture. 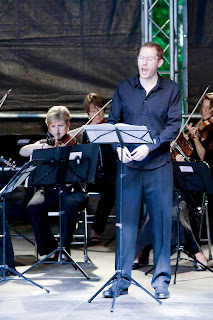 Infinitely flexible, full of vocal colour, lightish but never forcing the sound, Tritschler was perfection in Finzi's Dies Natalis. And how wonderful that its newborn infant's-eye view of the world was paralleled by a gently mewling baby in the audience. 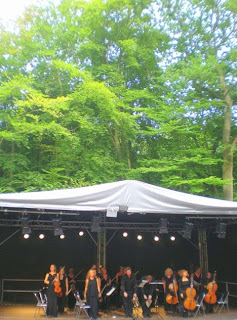 Inevitably, the Serenade crowned the glory of the late afternoon. Tritschler excelled in the difficult Dirge and flecked off the runs in Jonson's Sonnet to Diana. But an effect I'll never forget was fabulous horn player Stephen Bell's retreat to the woods for an offstage call to give us supernatural goosebumps. There were more of those in the Dream that evening, but I need to save it up for another day.
Posted by David at 10:07

Transported for the moment by this, pulling up my collar as I walk to the beach with you, wondering how Screw might sound with all female vocals, when the malevolence is essentially a disturbing male thing, but then perception is everything, and now I need to rush to the bus stop and get to town for a morning dress rehearsal of Albert Herring and disappear into the Big White Sails for three hours.

Britten is very much on my mind, more so for having just seen a staged Owen Wingrave about which I will soon seek your thoughts.

Certainly the male dimension gets lost, and the essential pathos (or surprising assurance, depending on interpretation) of the boy. Susie would be the first to acknowledge that the casting was born of necessity on a minimal budget. That said, it was much more impressive than I'd expected. You only have to listen to Susie's Quint singing at tenor register on the Radio 4 programme.

Hmm, Wingrave - the most problematic of the canon, isn't it? The Glyndebourne Touring production left me cold - after the fabulous orchestral introduction, which spoils you for the rest. Be interested to read your report.

This is all so lovely. Clearly we were on the wrong side of the Atlantic this summer--although it has been beautiful here, I'll have to say, if not so rich with music.

Looks like we may be on the wrong side of the Pacific this summer, too. I was reminded the other day that the Adams's Sax Concerto is this week in Sydney (so of course I had to pop up a post about that), and Denk is also down under. wanderer advised that he is going to both, so I'll be looking forward to his reports!

Now that I'm back from the Norwegian musicfest and the Swedish wilds - what wilds, what wonders (how very Wagnerian Stabreim that looks) - I expect a wanderer report very soon. I also see Denk has a new Bach Goldberg Variations CD coming out. Must catch up with his Ives Concord Sonata first, though.