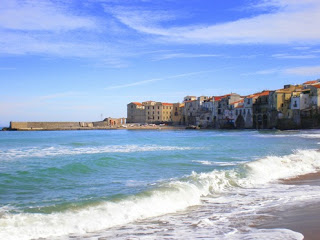 It should have been an entire morning, but bus connections for the return from Castelbuono to Palermo were awry on Easter Thursday, so we had to skip the desired climb up the crag which dominates this perfectly situated town, La Rocca, and made for a swift spin around Cefalù's old town. First stop after a walk along the sandy beach was another of Sicily's great Norman treasures, Roger II's Duomo. 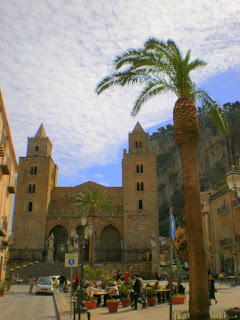 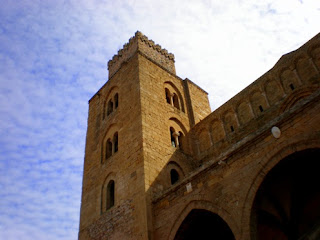 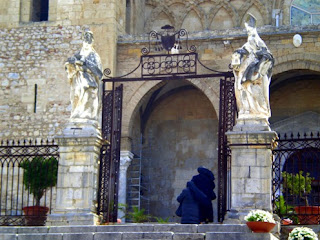 which was packed and scheduled to last the duration of our visit, so I only stayed long enough to take a discreet token shot of the 1148 mosaic dominated by a third great Christ Pantocrator to follow the one in Monreale - which none can surpass, surely - and to be succeeded, on our last day, by the more intimate King of Kings in Palermo's Cappella Palatina. 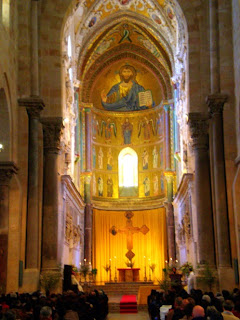 Left J with Cefalù at prayer and went to see the Mandralisca Museum, because I'd heard that this important private collection of Baron Enrico Piraino di Mandralisca (1809-64)  was under threat of closure; a newspaper article told how its staff had been working unsalaried for nearly a year.  There's a petition to sign  if you want to make a drop in the ocean of Italy's not-so-steady arts dismantling.

The Barone collected all sorts of stuff, much of it closed off no doubt due to warden shortages when I went and including a picture collection mostly interestig for its eccentricity. The treasure, unquestionably, is Antonello da Messina's Portrait of a Man (obviously not my image). 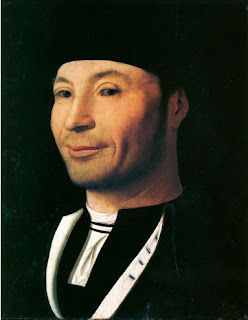 It's rather weirdly displayed and the 'legend' gives out some speculative nonsense about a local fisherman. Certainly the gentleman has a sly-peasant look about him. The identity, though, we shall probably never know. I curse myself for missing the Antonellos in the Palermo gallery - we'll return, without a shadow of a doubt,  fate of course notwithstanding - but have made amends by looking more closely at the four in the National Gallery and enjoying the unusual Saint Sebastian in Dresden's Gemäldegalerie.

The only other stand-outs in Mandralisca's collection, or at least the part of it I saw, are a quaint picture of Orpheus taming the beasts and the famous, if crudely executed, Greek vase showing the tuna dealer which I posted back in my Capo entry to show that, as far as street markets go, times have hadly changed at all. But it's always evocative to see works of art displayed on their patron's premises. Long may it stay that way in Cefalù.

We saw more fellow travellers here than anywhere else on our trip, but the locals are not at all absent. They hang out around the central bars, were frantically buying festive cakes at this pistachiocentric pasticceria 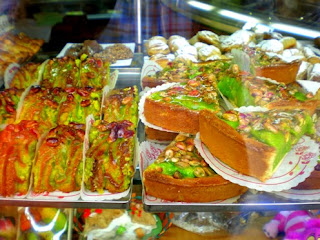 and frequented the central pharmacy, still so proud of its old status. 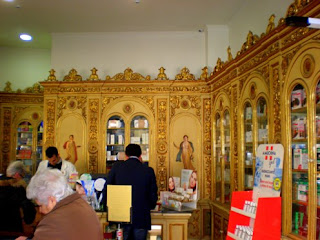 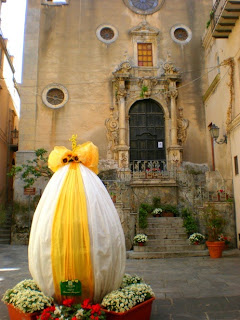 and the streets on our left all led up to the foot of La Rocca, 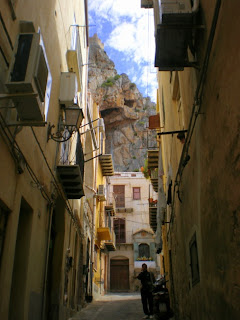 the climbing of which we must leave to another year. Torniamo, certamente, dio volente. I'll leave you with an 1830 view of the town by the German artist Carl Anton Joseph Rottmann. Cefalù may have since succumbed to modest urban sprawl - the train station is just beyond the furthest green clump - but otherwise not much has changed. 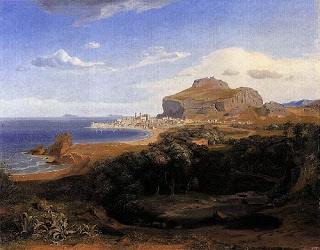 This is, I promise, the penultimate instalment of my Sicilian retrospective. By the time I finish it with a fond look back at Castelbuono, it will probably be time to go again. And it won't be soon enough.
Posted by David at 14:34

As always, your blog is a treasure trove of art and inspiration, delivered in generous and sparkling prose. This is somewhere I've never been but it's clearly one to add to the list.

Thanks, James; I return the compliment. As to one for the list - absolutely. I was just talking to a friend with kids about it and said I thought it was fairly perfect for a family holiday. Only 40 minutes from the centre of the Madonie national park, too; you could do a two-centre hol and stay in the delicious agriturismo I raved about in the Madonie entry.

All so lovely--not to mention, how often does one have a chance to use a phrase like "wimple-windswept nuns"!

Oh, nunnery can inspire one to so many phrases and similes...just enjoying Rupert Everett on the 'friendly blackbird' variety at Lourdes.