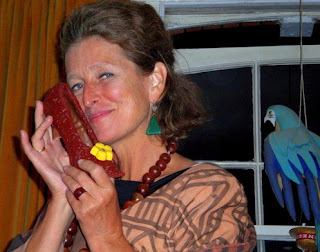 And the chocolate slipper award goes to the indomitable Sophie Sarin, seen here chez nous in an age when the parrot still sat guard at the window. TIME Magazine has just named her Djenne Djenno blog  one of its top 25 this year. An amazing accolade well deserved, especially since following the onset of war in Mali Sophie's was the ONLY reliable source of information as to what was going on (it still is).

This award of sorts also honours her singular brand of philosophy and humour, with a succinct introductory text, though the comments of sour aspirants who think they should have been preferred make dismal reading. What, more deserving than a woman who has helped, and continues to help, the blind to see by funding annual cataract operations in Djenné, among countless other community projects she's instigated?  I love this picture of what in biblical times would have been called a miracle. 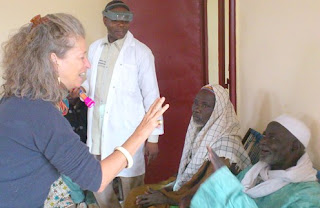 As Sophie's example was the reason why I took up what is outwardly at least far less adventurous blogging back in 2007, I'm delighted to homage the Blogmother. In not too long a time we'll be bathing with her in a Swedish lake, and in the meanwhile may Mali choose its leader wisely.
Posted by David at 11:50

David dearest! Thank you for this. looking forward to the lake!
xxxSophie

Dahling, it is just a LITTLE galling that you only turn up here usually when it's about you. But in this case you are forgiven in the general euphoria your London friends - and others round the world, no doubt - feel for you today.

I want to know more about the Seventh Seal island and whether it's closer to your ma's than Visby.

I was so delighted to see this, and I love the photos you've chosen to accompany your own inimitable Nicean brand of celebration, not to mention finding out about your own blogging back story, which I didn't know.

Susan - take care. The Council of Nicea (325) gave rise to Nicaean Creed, sometimes spelt without the dipthong and hence Nicean - and I doubt if David Nice would care to be identified with any such pivotal doctrines of the Church.

Ha! Now I do have a Nicean Creed, lifted straight from Nabokov's Pale Fire: that there can only be one commandment - Thou shalt not do harm to others. Nabokov has another - Thou shalt not kill - but I reckon that comes under the aegis of harm.

Now, Sir David, do the decent thing and congratulate our dear friend, either here or over there.

Sue, I think you know that our friendship with Sophie pre-dates her time in Mali and the blog. Her godmother (younger than her, such are the ways of the Catholic church) we met on the top of Krak des Chevaliers in the pouring rain, and so many good things - including Sophie - flowed from tht encounter.

Well, to be in the top 25 blogs in the world is something hard to grasp - but what an achievement !! And as this kind of communication is certain to grow exponentially and with many dangers, it is a splendid ( and if we are to have a happier world a necessary ) fact that wisdom and kindness are recognised.

You're right, David, the message-spreading in the ether is such a two-edged sword. Talking at table last night with Zsuzsa, who thinks it's all bad, but I see so much potential. As Tanya Gold's article pointed out, we all have a voice to reply to the negative, and as for Twitter, we don't have to go there (I never shall). And the rules have yet to be established.

Briliant! Congratulations Sophie. This is so well deserved for all the reasons anyone following the blog well knows, and for those visiting for the first time, now being discovered. There's goodness at work, thank goodness.

Hi David I would love to repost Sophie's latest blog. I left a comment but if you are in touch with her it would be great if you could pass on the message. Thanks very much

Howard, I'm sure she'll reply to you before I get to see her, which won't be for some time.

hello everybody! sorry to be so slow in replying- I am speeding around Sweden in different destinations every night and have hardly had a moment to check my emails!
Thanks for all the kind comments- and Howard of course you can use the blog post!
The Seventh Seal Island is about the same distance to Visby as my mum's, David.
xxxSophie

But the real question - if you're anywhere to be found - was whether the Seventh Seal island was that much closer to your mum's than Visby, which unless I'm being completely stupid is a different question, I think...

Rainy day here, so a chance to catch up, and laughed aloud to be "caught out" by DD! David N, enjoy your time chez Sophie. Sounds delightful!