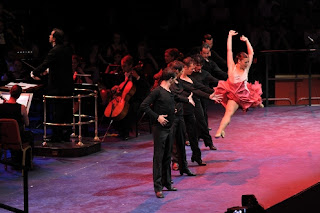 That's partly a reference to Falla's vibrant ballet El sombrero de tres picos, but chiefly to an historic seven days at the Proms, with not only a Ring cycle at the highest level possible but also two other impressive feats: squeezing in Tristan und Isolde between Siegfried and Götterdämmerung, all three of which I had to miss because of my proud association with the Brittenfest in north Norfolk, and the participation of the stunning Antonio Márquez Company in Juanjo Mena's BBC Philharmonic spectacular of Beethoven, Falla and Ravel.

Had the dancers made it into the Proms prospectus, I would have noticed and made a special effort to go (bulletins were subsequently sent out to advertise their addition, but I somehow overlooked those). I can't regret going to the English National Ballet triple bill that Thursday night instead, and I love the only-connect fact that shortly after we'd seen a state-of-the-art Petrushka with Benois's designs and Fokine's choreography, orchestra and dancers at the Albert Hall were to some extent recreating a Ballets Russes hit of 1919.

That second half with Ravel's Boléro following The Three-Cornered Hat, at any rate, I managed to see on its BBC Four transmission, and colleague Jasper was absolutely right in his five-star 'Danza Erotica' review on The Arts Desk. On the platform where Anja Kampe, Nina Stemme and Bryn Terfel had sung and acted their hearts out two nights before, the dancers gave us sex without the usual cliches. Founder and star Márquez justifies his position, electrifying in the Miller's Dance of the Falla one-acter (pictured below) and dripping buckets of sweat as he launched Boléro shirtless. 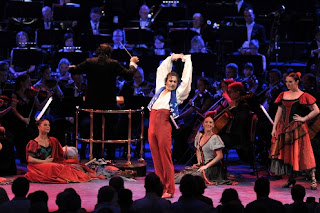 The patterns of various dancers outlined the different phases in the slowly crescendoing tune; the stamping only heightened the orchestral excitement. And let's not forget the fact that Boléro started life to choreography by Ida Rubinstein's company, mixing factory rhythms and sensual provocation. Is this a first for the Proms? I know there's been dancing before an orchestra before, chiefly when Rostropovich conducted Prokofiev's Romeo and Juliet at the Barbican and the Lithuanian Ballet joined in, but surely never at this level.

It won't eclipse memories of a slower, deeper-digging Boléro at the Proms conducted by Esa-Pekka Salonen with subtler Ravel at the other end of the scale in the shape of the complete Ma mère l'oye ballet, but it was certainly something I've never seen before. Here's it is on YouTube. I fear they've clipped the first few seconds of side-drum, but at least it's otherwise complete. You can still watch the whole BBC Four transmission on the iPlayer for the next few days.


In its way, this was every inch as much of an achievement as 'the Barenboim Ring', though less widely noted. Much as my attention was riveted by every note and gesture of Das Rheingold and Die Walküre, the climax to the week would have been the Götterdämmerung - I was bathing blissfully in a warm North Sea off Holm Beach as it began - and clearly Barenboim's afterspeech thanking the Prommers for their silence was deeply felt. 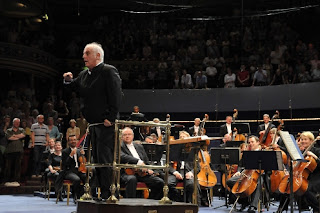 I need to disgorge all my impressions about Britten in South Creake, Wells-next-the-Sea and Holt, but I can't download my own photos at the moment for several complicated reasons, and I still need some Yorke Trust snaps of their Midsummer Night's Dream. I'm sure it can wait; happy memories keep me going meanwhile. And now to the Proms Tannhäuser. 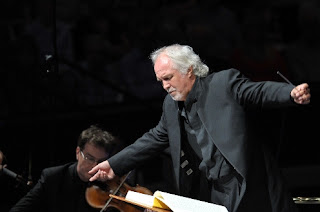 5/8 Still buzzing from it. Duly eulogised on The Arts Desk. Another Prom for the history books. And how could I resist a couple more of the indefatigable Chris Christodoulou's shots, others of which feature above? As I wrote on TAD, Runnicles is a gift for him - and a match for Barenboim, which is putting it mildly. 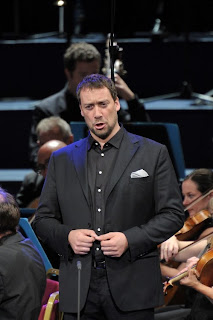 This big handsome man, Estonian bass Ain Anger, is a new god on the block. Read why over there.
Posted by David at 23:59

What an extraordinary Proms this year. Is this more operatic than usual? Who does the programming, may I ask?

Yes, it IS more operatic than usual, mostly due to the Wagner bicentenary (the Proms' Verdi celebration, on the other hand, has been selective and low key - Pappano's evening of rarities didn't quite work for me).

The planner supreme is the marvellous Roger Wright, former head of Radio 3, such an engaging speaker who always gives a treasurable prep/pep talk to the critics at the launch each year. I slap him about only for the absence of Poulenc, but I understand he doesn't believe in celebrating death-anniversaries.

I am always doubtful about adding a marginal point to so much expertise, but I can report that Queen Victoria was so taken with the overture to Tannhauser ( which was one item in a concert ) that she asked for it to be played again, putting out the timing of the evening. Wagner ( who was conducting) claimed that the repeat was his idea. When the Queen and Prince Albert were very charming to him afterwards it occurred to him that they may not have realised that they were talking to a former revolutionary

The question is, I suppose, who most took her fancy: the pilgrims or the sexpots of the Venusberg?

Needless to say we got the whole orgiastic ballet as well last night. Such a treat to hear Wagner using castanets...