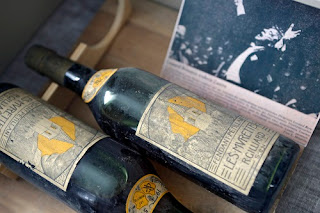 Some of my colleagues take exception to labelling an anniversary of a deceased great a 'birthday', so let's say that we celebrate Leonard Bernstein's colossal achievements as composer, conductor, pianist and educator on the 100th anniversary of his birth today. By happy chance I can only imagine doing so with a glass of Swiss Fendant from the cellar of the Schweizerhof Hotel in Lucerne, where I've been staying for two unforgettable nights of the festival (and a privileged tour around Rachmaninov's Villa Senar across the lake). The Schweizerhof claims he was served this very wine on the night he and the New York Philharmonic took Lucerne by storm, 27 August 1968 (coming up to another anniversary, then, the 50th - so he would have just celebrated a significant birthday). Here he is in 1971, the year of what to my mind is his greatest masterpiece, MASS. 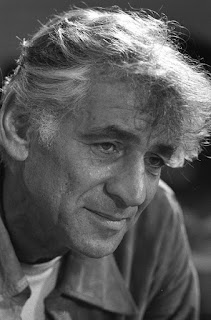 Each room here is 'styled' after a significant guest. I get a celebrated Swiss weatherman, Karl Frey, which has been educational. I did ask if I could see the room where Wagner composed the last notes of Tristan und Isolde - how thrilled LB must have been to know about that - but it's occupied until Sunday, and I'm shortly gone to catch John Wilson's performance of On the Town at the Proms tonight* (Lucerne, sadly, is not playing a note of his music in the official programmes today). But the nice marketing manager did let me have a look in the Bernstein Suite, which has a familiar logo above the bed as well as the above bottles and newspaper cutting in a glass case. 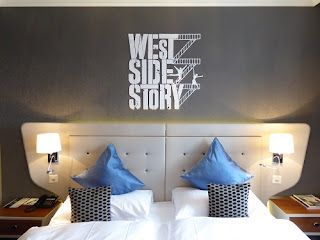 On Tuesday I took a very engaged group of students, courtesy of one of them, Gillian Frumkin, making her home available, through a Bernstein 'snapshot'. Without further ado, these are the examples around which I based my talk. I think the connections are mostly explained, but I won't pad further.

Bernstein on the tritone in Debussy's Prélude à l'après-midi d'un faune in the fourth of his Harvard talks on music, 'The delights and dangers of ambiguity'. Five of the six are complete on YouTube; I have American-region DVDs released by Kultur. 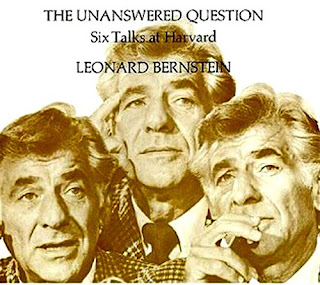 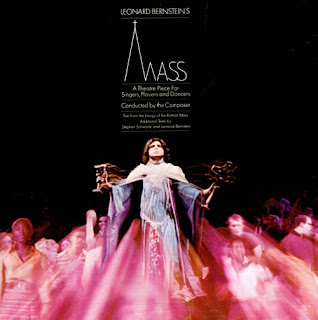 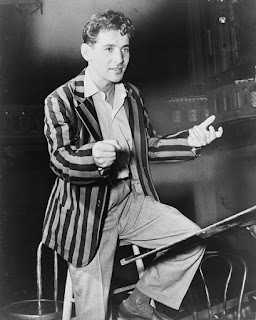 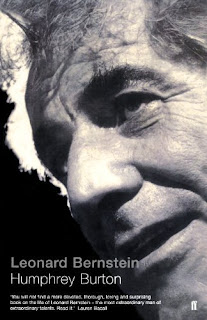 The 'suggested reading' had to lead with Humphrey Burton's colourful biography, published by Faber. I'm halfway through and hope to finish it this weekend. What already strikes me is how much nicer and more considerate a human being LB turns out to be than I'd imagined: so much support of good democratic causes, so much non-egotistical connection with others (like Koussevitzky, for example, whom he obviously revered). I met him, courtesy of my then editor on The Guardian, Edward Greenfield, at his final recording sessions, for Candide -  Adolph Green, adorable man, was also there - and he held my hand firm while walking towards the gents, which was a bit odd. 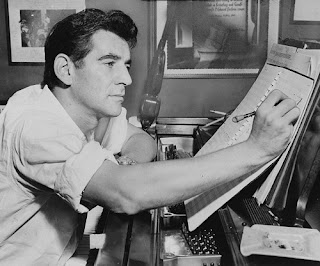 Last Tuesday I also quoted some rather strange stuff - including a fantasy story about LB's coup de foudre on meeting Mitropoulos - from the volume Findings. There's also a print version of The Unanswered Question: Six Talks at Harvard. Those are so compelling - do watch or read. I still have some listening to catch up with, too, and Burton makes one want to unearth some early rarities which must be lurking out there somewhere. Favourite recording of a work by another composer? The spacious and partly cut but so, so full and gorgeous Strauss Der Rosenkavalier with the Vienna Philharmonic. And on DVD, of course, the Vienna Phil Mahler cycle. Of the live performances I caught, unquestionably the greatest was his Mahler 5 with the Viennese at the Proms (I queued from midday to get an Arena place). Performances of his more serious works, not so much; but then I'm no great fan of the symphonies. Otherwise, the riches keep on giving. As an unusual and stylishly done anniversary tribute, this from musical saw artiste Natalia Paruz takes some beating.  Deserves to go viral.


*UPDATE: 26/8 And here's what I thought on The Arts Desk. Photo of the 24-hour changeover at the end by Mark Allan for the BBC. 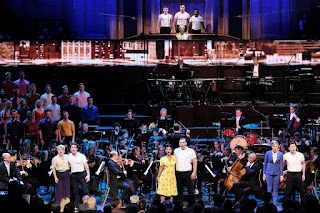 Bernstein's brilliant personality and talent ( they are facets of the same thing) do not seem to me properly described as unique, since the word "unique" has almost a one dimensional implication. Rather I would say that the only slot into which one could fit Bernstein is one marked " Bernstein", just as Bismarck will only fit into a slot marked "Bismarck ". And though there are few similarities between the two, there is one: they think on a plane of intelligence and insight different from the rest of us, and indeed on a higher plane.

Well, I think he was hyper-human rather than a thinker on a higher plane - when he tried the transcendental in his music, it didn't quite work (for me, at any rate). I'd say he had all those gifts we would like in terrifying abundance, and with a terrifying energy to sustain them. But he was certainly complicated. What surprises me is how much I'm liking him in the biography - I've reached 1957, but Humphrey is warning of hubris ahead...

I think that we are in agreement, though using different wording. Your second sentence describes Bismarck.

I would suggest that people like this should not be in the frame to be liked or not.

Nobody is 'above' a common humanity. Trying to find it in geniuses flawed in their daily lives is the trick.

Hotel Schweizerhof - what a treat!
On Friday night Ely had a big treat - the Humphrey Burton 1973 35mm film (Unitel) of Bernstein conducting Mahler 2 (LSO, Janet Baker & Sheila Armstrong + Edinburgh Fest Chorus) in Ely Cathedral was shown IN the Cathedral. Great experience! Humphrey B introduced it - touching on the myriad production problems of a 'traumatic weekend of filming' - bats whizzing around, a collapsing crane camera, even a bomb scare - and signed my treasured copy of his book (the Ely moment gets a paragraph on p.419). He says the 'performance itself had an epic power that Bernstein never surpassed'...
Overwhelming - Couldn't understand why the whole world wasn't there - it wasn't as full as it deserved.
NB Bernstein daughter Jamie's memoir is a great read. Did you catch Tom Service talking to her on Music Matters yesterday?
Dilys P

What a terrific gesture! I have that performance on the DVD box of Bernstein's Mahler performances, but to see it IN the place with affable Humph presenting must indeed have been special. I'm halfway through the biography now, and it offers so many things to follow up. Must see if I can get hold of his TV programme on conducting. And other memoirs, too.

On the subject of LB memoirs, David, did you catch Jonathan Cott's winning little Dinner with Lenny? Account of meeting LB very shortly before you did, at the end of his life. I've also Charlie Harmon's recent memoir to read shortly. It looks quite lively!

Not yet - so much peripheral reading to catch up on. But I must see as many of the films/TV broadcasts as I can first...I'm feeling Humph is holding much on the personal front in check.

Just catching up a bit more today with Warner's new LB set from Paris, which I'd recommend for its live 1979 On the Waterfront and West Side Story suites - real temperament and commitment in the playing - and its 1975 Ravel centenary concert, with a fabulous La Valse. I've been enjoying too the extended rehearsal sequences for the Ravel. LB sings along in Sheherazade in the absence of Marilyn Horne, with obvious affection and knowledge - but, oh, you know what they said about the one talent Bernstein didn't have, for singing? It's quite cherishable. Good set.

Yes, his attempts to sing 'Big Stuff', the blues he wrote for Billie Holiday which prefaces Fancy Free on a jukebox and is adapted as its Pas de deux, are very amusing (as I remember, they're to be found on his second recording of the ballet). No, he can't sing, not in any conventional sense of the word. That all sounds fascinating but I still have to catch up on works I haven't listened to yet - chiefly Dybbuk and A Quiet Place. I've just finished Burton's biography and the tragic personal break-up of his life after the catastrophe of Felicia dying shortly after he 'came out' and left her is wrenching. I ended up feeling very sad for him as a man, despite all his colossal achievements as an artist.

The late 1970s must have been tough years for him indeed, David. I enjoyed the Baltimore/Thibaudet/Alsop Age of Anxiety from the Proms and have been investigating the symphonies. They're rather difficult to get into, I find, but there's a thread of real angst running through them, and it's sobering to think that the earliest come from the 1940s (i.e. when he was still in his 20s). I don't know Dybbuk or A Quiet Place either; perhaps you could let us know in due course what you make of them.

Yes, I find them hard work, whereas in MASS the angst seems less contrived. No doubt he felt it. Do watch the Opera North film of Trouble in Tahiti on YouTube: https://www.youtube.com/watch?v=Gc5H9b0yWqg&t=3s I don't think it could have a better advocacy, and Wallis Giunta is stunning.

The advantage of coming late to the party here is to have not only the benefits of your post (I particularly enjoyed the brief notes of your tour through LB with students), but also the delighted and delightful comments. I love your observation that LB was “hyper-human,” which seems to me to fit him to a T.