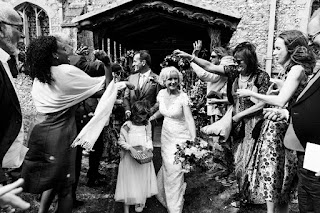 Hardly surprising, the international component, since our beloved Juliette and Rory, as respectively aid project manager and one-time Guardian Middle East correspondent, lived together in places like Islamabad, Baghdad, Beirut and Jerusalem (guess which one we haven't visited). The wedding guests last Saturday came from various parts of the UK but also from Ireland, Belgium, France (I got an early flight from Bordeaux), Thailand, Sicily, Morocco, Cyprus, Jordan, Oman, Jerusalem, Istanbul, Kabul, Pakistan, Mali, Mogadishu, Washington, New York and Australia.

It all took place, after their first 17 glorious years together, in Julie's home village of Blewbury, Oxfordshire, where her wonderful mother still lives, and you don't get much more English than that. The above photo captures the spontaneous spirit of the day; mine below is simply there to show you more of the church between the showers. 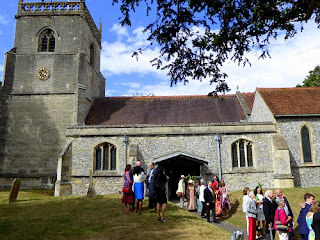 Despite delicious kinks in the wedding service, the afternoon and evening travelled smoothly along expected lines, including a wedding banquet in a marquee on the home lawn and speeches from Rory, Julie (this, at least, is a recent departure - the lady does not remain silent) and Best Man. The dancing, too, was initiated by the bride and groom; we joined in the Arabic numbers. No-one there, I hope, would have been shocked to see two men dancing together the way we did, but I DID think that the table labels ('Lancelot and Guinevere', 'Tristan and Isolde', 'Layla and Majnun' - that's an Azeri couple) should at least have run to one like 'Hadrian and Antinous'. Well, we same-sex marrieds were in a small minority. Anyway, here's my conventional cake-cutting shot, and they are indeed a beautiful couple. 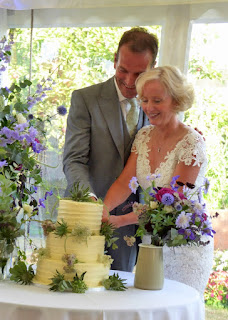 We wouldn't know our extraordinary friend Sophie, nor visited her mud hotel in Djenne, if we hadn't met Juliette first, nearly 25 years ago. Julie told us her 'goddaughter' (yes, really) needed cheering up in London and we took her to a lousy play about the Holocaust in the basement of our local pub. It was so bad we actually laughed a lot and bonded instantly. 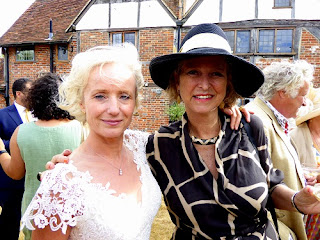 We also wouldn't know Juliette if our passports hadn't been stolen while we spent a night in an airport hotel in Damascus before supposedly flying on to San'a (a city I guess we won't see now). After 10 hours in an airport holding-space, we were finally rescued by Peter Noon, British Consul, who took us to HQ where we saw a polaroid of then recently-released Terry Waite on the wall and got our temporary passports, after which they were duly stamped, and stamped again when we revised our travel plans and took a service taxi to Amman in Jordan and on to Petra before travelling back to Damascus (more visa shenanigans). 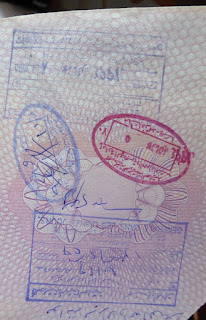 Before that, our extended stay in Syria, which I can't regret for any reason - we had intended to spend four days there on the way back - meant that we spent New Year's Eve and Day in Palmyra 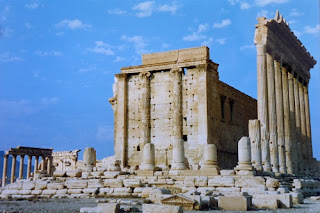 and went to the crusader castle of Krac des Chevaliers on quite a different day than the one envisaged in our original plans. And there, in the pouring rain, I saw three figures emerge on another tower and serendipitously snapped them before a word had been exchanged. 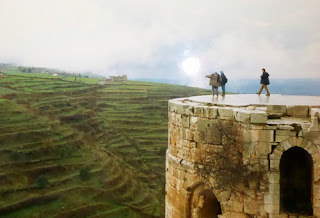 These were Juliette (centre), Nick her travelling companion (right) - Rory was some years in the future for her then - and their guide (left). She shouted 'Are you English?' and 'Why are you carrying that music case?' (I was also wearing tweed, as we did on our travels in those days). Meeting them at the main gate, J thought she was 'a bit braying', but we bumped into each other again in Damascus, had supper together and the rest is history (even weirder is the fact that our dear friend Cally had told Nick, who was her landlord at the time, that he would probably meet us at Crac). Along with our Viennese friends Tommi and Martha, whom we met during a six-hour delay to our flight from Cairo to Asmara and with whom we subsequently travelled a bit around Eritrea, Juliette and hence Rory are the real abiding friends we've made from our travels. Very loving and loyal ones, too. Here's to their next decades together.
Posted by David at 09:58

"The skool play this year was Hamlet. Most of the parents had seen it before, but they still laughed"

Wot larks! I don't remember that but I still have my skool copies of three in the Willan(s?)/Searle series, chiz chiz.

It was the scene with the three Nazi officers in a room discussing the Final Solution that we found risibly inappropriate.