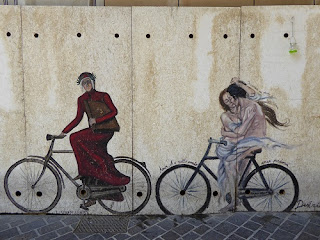 The shady Zona Dantesca/del Silenzio around the poet's local church, San Francesco, quickly became my favourite refuge from the sun, if not the humidity, during my charmed time in Ravenna. 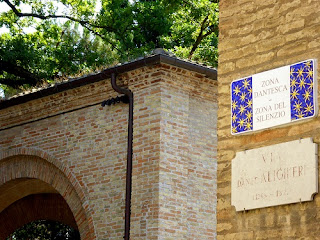 Of course there's the wonder of the tomb itself, a symbol of the ongoing homages to the master combining an 18th century exterior by Camillo Moriglia 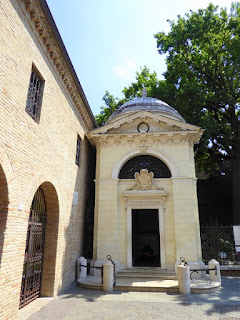 with Pietro Lombardo's 1483 original, including a fine relief. 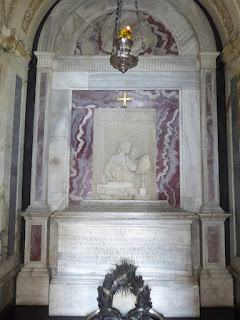 The story of Dante's bones and their various shakeups since he died in 1321 after three presumably tranquil years under the patronage of Guido Novello di Polenta - the Polentas of Ravenna are buried and have memorials like this one in Dante's parish church, San Francesco - 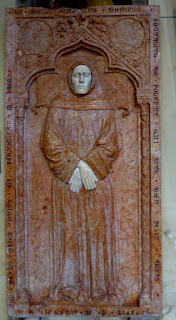 is a fascinating one, and it's comprehensively told in the displays of the Dante Museum on the first floor of the Centro Dantesco. 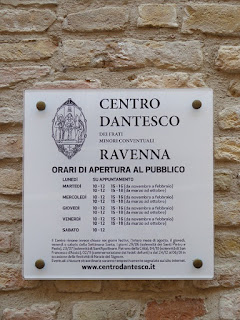 While there is an active courting of the non-Dante-reading public with some of the displays, 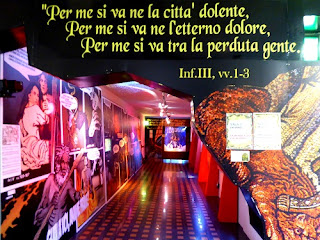 the right wall of the 'Inferno' room tells the history. On Polenta's orders, Dante's remains were placed in a marble sarcophagus lodged in the Chapel of the Madonna between the church and the convent. In 1519, alarmed that the Florentines wanted to reclaim the bones of their exiled poet, the monks remove them to a sepulchre installed within the walls. Another monk rediscovered them in 1677 and had them placed in a wooden box with this inscription. 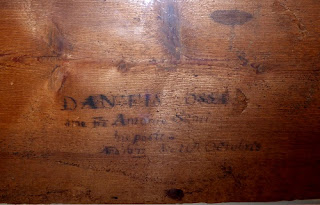 The box in turn was walled up when the fraternity was banished in the Napoleonic invasion in 1810 and not discovered until 1863, when a workman came across them. Great celebrations in Ravenna, and a public display of the bones, announced on this poster, 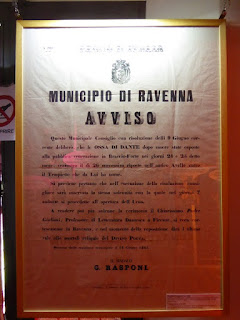 before they were lodged in the 18th century chapel. In wartime, the bones were moved yet again 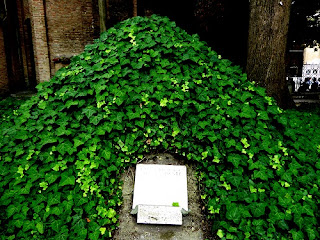 and finally back again. Amen.

The museum has one original room decorated in 1921 by the Dante Society of Montevideo (!) 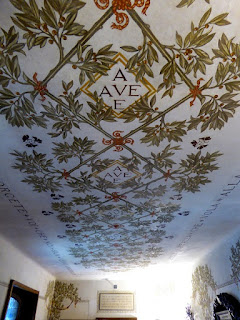 and fine views over the cloister of San Francesco's monastery (the monks moved back in a century and a half after their evacuation). 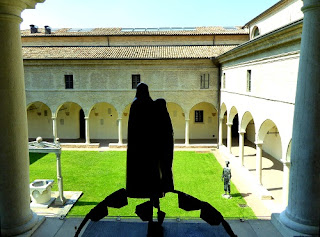 The next courtyard belongs to the Palazzo Rasponi where Byron lived - there was a Byron conference going on in the rooms adjoining the museum - and here we gathered on the first morning for what turned out to be a pretentious 'homage to Dante' by a 'poet' and a loud band (who were better). I didn't stay for long; the audience, however, was more interesting. One of these ladies was with a strapping 'figlio di momma', not pictured. 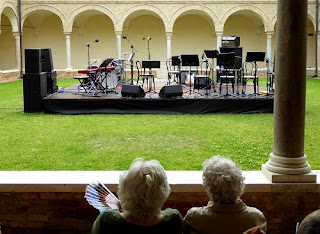 If that Dante event was a disappointment, there was a major compensation later that afternoon - on my way back along the main shopping drag from San Vitale, I came across the splendid reciter doing all the voices from memory, giving us the whole of the canto about Cacciaguida. 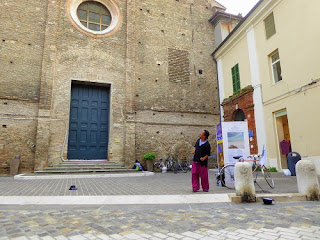 I was hoping to see him again on subsequent days, but I didn't.

The square of San Francesco is a lovely one, lined by trees and a pretty garden on one side and with a very good cafe-restaurant under the arches on the other. 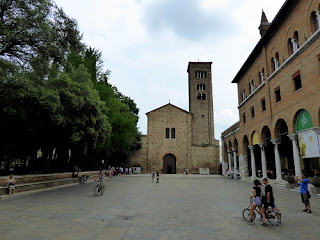 Our Virgil in the Warburg Dante classes, Dr Alessandro Scafi, was responsible for choosing the quotations from the Divina Commedia carved into the stones. He wanted a sense of a passage from profane to sacred as one approaches the central west door of the church, in front of which we read 'Va, e andando ascolta' - 'Go, and listen as you do so'. 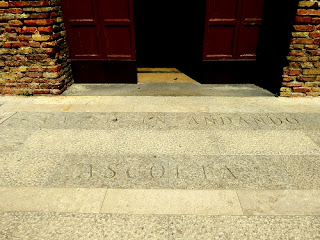 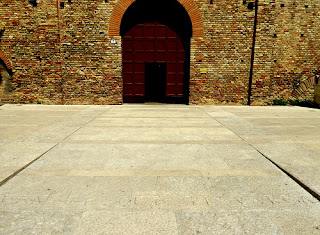 And then there are the beautiful last four lines of its final Canto:

(I returned from the most holy wave refreshed, as new plants are renewed with new leaves, pure and made ready to rise to the stars). 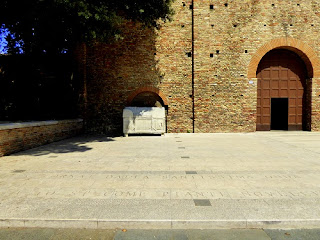 There is also a Dantesque inscription on the ex Casa del Mutilato on Piazza Kennedy, a Mussolini-era experiment from the years 1937-9 built in the demolished Jewish Quarter and now refurbished. Strictly speaking it's 'de l'alto scende virtù che m'aiuta'. 'from on high descends a power that helps me; line 68 of Purgatorio's Canto I. 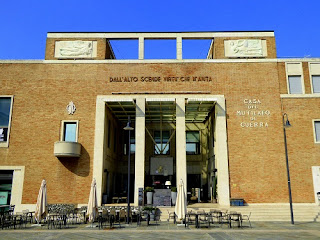 The interior of San Francesco may seem a little gloomy compared to the mosaiced glories of other buildings in Ravenna, its sales table manned by two old ladies who had a little difficulty giving me the right change for the postcards I bought. But it has atmosphere, with its 22 columns of Greek marble and a splendid roof 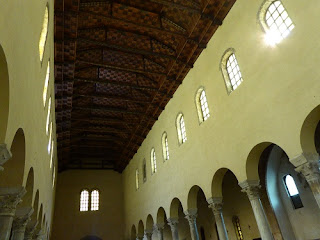 and a treasure you might miss if you gave the building only a cursory glance: the crypt of Bishop Neon's fifth century original with a mosaic pavement now affected by Ravenna's rising water levels. 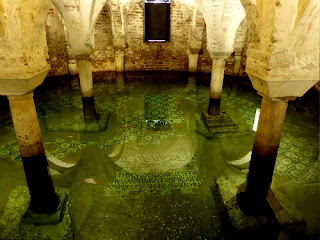 This only makes what you see through a grille below the high altar the more picturesque; and the goldfish are there for practical reasons, feeding on the algae which might otherwise destroy the mosaics. 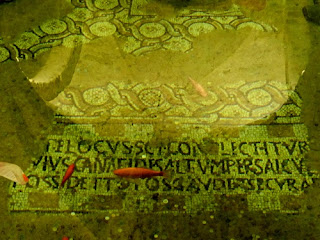 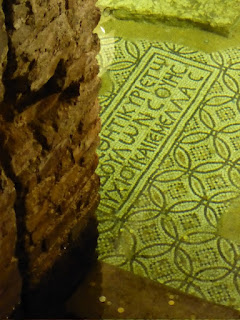 That more or less concludes my Dante instalments. I don't want to leave him behind. I have yet to make headway with the dual-language edition of Vita Nuova, and I'll certainly return to the Scafi-Took spectacular next 'term' for the earlier Inferno classes I missed by joining late.  As for the lead image, it's part of a splendid mural over one side of the boarded-up central market place, also featuring other Ravenna-connected celebrities. Insertion: a bit of classy graffiti elsewhere, presumably a take on Dante and Beatrice. 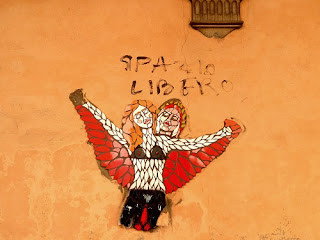 And there are several fine cafes and restaurants on the other side of the street, which the Ravenati frequent with their dogs - as regular a feature of the city as the bicycles. 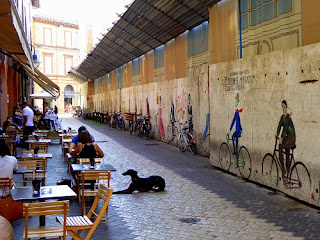 The travels of Dante's bones could make for a canto or two of their own. And I do love your juxtaposition of a disappointing Byron event with a street busker's fine recitation of a Dante canto. What a blessing it would be to have street performances like this in the NY subway stations, as opposed to so many bad performances of uninteresting music.

Your choice of quotation from Dante entices me once again to want to try to read the whole. I'm fearful without a guide, I would fail, but we shall see.

I was fascinated, by the way, with the goldfish. The rising waters are a worry, I would think, but the solution seems ingenious. And this reminds me of a new little bit of local history here we uncovered--actually that Jackie, one of our visitors, uncovered--about goldfish. Among the people buried in the Newburgh cemetery (a wonderful little town, full of history and appealing architecture, currently in the early stages of a renascence) includes the Robinson Mausoleum. Captain Robinson, captain of a vessel engaged in trade with French ports, brought home a lot of "those pretty fish" and put them in a pond on his farm. He turns out to have been, or so it was reported in a news article from 1908, the first to bring goldfish to America. On looking further, it seems goldfish, whose origin was China, came to Europe through Portugal: "During the 1620s, goldfish were highly regarded in southern Europe because of their metallic scales, and symbolised good luck and fortune. It became tradition for married men to give their wives a goldfish on their first anniversary, as a symbol for the prosperous years to come. This tradition quickly died, as goldfish became more available, losing their status."

I have been saying much the same about the ossa-saga: would make a good screenplay or historical novel. But don't blame Byron - the event was actually part of a young artists' Dante celebration organised by the festival. Nice to have a morning event, in principle, and admission - as for the late guitar recitals in San Vitale - was only one euro.

I wish you could come to the Warburg classes, though I may try to persuade Dr Scafi to record his readings, in the most beautiful spoken Italian I've ever heard. Durling's dual-language edition, in three fat volumes, is the best possible guide for someone who applies to study as diligently as you do; the notes at the end of each canto are enthralling.

Interesting about the goldfish in America. I wonder whether the good-luck syndrome found its legacy in the fairground 'throw a ping-pong ball into a bowl and win a goldfish' game prevalent in my youth, My dad kept winning them at the annual Derby fair; we had three and others were given to friends. Sadly Pinky ate Perky, or so our neighbour wanted us to believe, while we were on holiday, The devil once jumped out of his bowl and fell down the back of the piano, but was saved.

Goldfish and their uses. Geese keep grass down. Sparrows etc got into the Great Exhibition of 1851......."What can be done ?" Victoria asked the Duke of Wellington ( he was consulted on everything). "Sparrowhawks Ma'am" he replied, and following his advice we now have a resident sparrowhawk to keep the small birds away from the tennis at Wimbledon.

Dante's family supported the Guelphs and Dante fought for them at a not very famous battle. Our Royal Family are Guelphs from 910 ( or 1070 if you are strict about the Welf inheritance). Since The Guelphs were on the side of the Papacy against the Holy Roman Emperor, Henry VII was rather out of line to take on both.

As to music being played in NY as opposed to a reading of Dante, one has to judge the likely audience. Once in Germany and on the platform in the underground/subway one of my committee suddenly sang Pizarro's aria "Ha! welch' ein Augenblick" ( Very loud, but you can see that I chose my members well). Most of the crowd stopped to listen. That would not have happened in London

The Italians named their first modern battleship "Dante Alighieri" in 1913. I cannot remember one of our dreadnoughts being named Shakespeare.

Rather more complicated re Dante and the Guelphs - the real trouble came about in the split between the whites and the blacks within the Guelphs. That's what got him exiled.

Re audience - quite right. Though I think Shakespeare (sonnets or scenes from plays if more than one performer is present) would capture the crowds. The memory of this chap was phenomenal. I don't know if he knows it all by heart, but he was moving on to the next canto when I had to move on.

Re boats - we sad Brits can do no better thanb 'Boaty McBoatface'. I love it that the tail fins of Norwegian Air, featuring famous Scandinavians, include Nielsen and Birgit Nilsson among the faces.
.

About the picturesque goldfish inside of the St. Francis' crypt, in the summer they also eat the larvae of the local infamous mosquitoes ;-)

Better still... I was dreading the mosquitoes but never encountered that fearsome buzzing in the ear at night. Praise be to my simple but effective hotel room.

David, your goldfish story is priceless. And, BTW, I've ordered up the Burling translation from the library. And if you do succeed in enticing Dr. Scafi to record his lessons, do let us know.

Durling, I assume you meant, and got the right one! I have a CD of Italian readings from Inferno which aren't a patch on Dr Scafi's. I think there are good ones on line from Vittorio/Victor Gassman (sp?). Benigni not quite on the same level.

Durling, yes, that’s the one I ordered up.