Company at last - and a few Follies offcuts 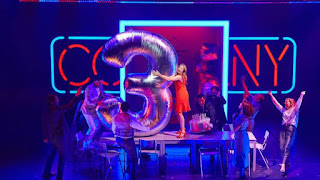 Nearly missed it - and you will, too, if you don't go today (and don't ask me if there are any tickets left, though we got half-price ones from the Leicester Square booth). Marianne Elliott's endlessly inventive production of Company hit the headlines because Sondheim's evasive protagonist, whom I last saw played by the superb Adrian Lester, has become a woman, anxious about the need to settle down and start a family while the clock's still ticking. I like the way that Elliott underlines to David Benedict in the programme how this is 'not better, just different', a concept for this particular time. All production images here by Brinkhoff/Mogenburg. 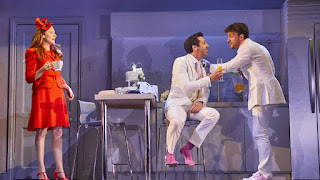 It involves some major cast changes: Bobby's lovers become men, who pull off the Andrews Sisters pastiche 'You Could Drive a Person Crazy' very much on their own terms, though one of them - George Blagden as PJ - falls a bit flat on his own, the only member of the cast to do so; it may be what his character's given to do. 'Getting Married Today' is now 'owned', as they say, by Jonathan Bailey as Jamie, not Amy (pictured above o the right with Rosalie Craig and Alex Gaumond), and that 'should I?' aspect applies equally well to the ramifications of a gay marriage (it could stay in any future production, and I don't see why Bobby - here Bobbie - shouldn't be a gay male, either). 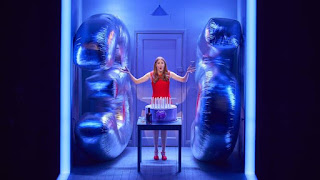 Anyway, Rosalie Craig is bewitchingly wonderful and funny as our heroine. She has that admirable habit of delivering key numbers as if they were improvised on the spot (which stops 'Someone is Waiting' from getting sugary). 'Being Alive', which I also have difficulties with out of context (and without the spoken interjections), is rightly her magnificent zenith. Her situations are a gift to designer Bunny Christie, who springs on us an Alice 'Eat Me/Drink Me' situation shortly before the 11 o'clock number so vibrantly delivered by Patti LuPone (pictured below), 'The Ladies Who Lunch' (perhaps too vibrantly; one just can't imagine this powerful woman sensing futility or mortality). 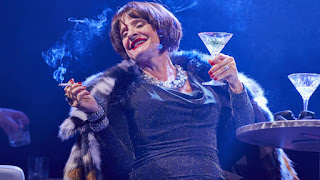 Way more brilliant things than not so good, then. But I had some doubts. About the dynamic between Bobbie and her lovers, especially air steward Andy, camp as his breed tends to be - though I have to gush about Richard Fleeshman's Greek-god body. About the sound of the band - folk whom I'd spoken to thought that was only under-par thing about the show, but I feel the problem is due to not using Jonathan Tunick's orchestrations, still sounding splendid on the original cast recording. About the de luxe edition - were the extra movement people necessary in 'Another Hundred People'? About the dialogue, above all. Reams of it. All the songs are winners, but I found myself waiting too impatiently for some of them. Spoilt of course by having seen Follies again a couple of weeks earlier, in which, as Peter Forbes pointed out, the dialogue is so minimal and takes us up to the musical numbers which then further the action. Only a year later than Company, Sondheim had discovered how to 'do' musical theatre rather than a play with songs.

Still, when I enjoyed it, I adored it - and came back for further fixes of both Follies and Company on CD. Spent some time and small amounts downloading from Amazon Follies numbers which either hadn't made the original show or were added for the first London production. This is the most, well, beautiful, a Ben/Sally duet that is just as haunting as 'Too Many Mornings'.


The text may be unambiguous; it's the music with its bittersweet downward slips that works the magic: Sondheim in Ravel Valses nobles et sentimentales mode. Surprising he didn't re-engage it in A  Little Night Music, but then words for him come first, and the melody couldn't be twisted to fit another text. Lovers of Follies will recognise it as the opening of the Overture - ah, so that's what it is! - along with a number for Buddy, 'That Old Piano Roll'. I could only find Wynton Marsalis's arrangement on Amazon, but here it is as sung and played by the master in his demo sequence (at 7m25s). What's more, the sequence starts with the original version of what became the 'Beautiful Girls' we know (much better).


From 38m40s onwards you get three more numbers you probably won't hear in any production of Follies today. All this began because I mentioned to Peter and my friend Simon after the revival performance we attended that I preferred 'Ah! But Underneath' - composed for Diana Rigg in the only previous London production - to 'The Story of Lucy and Jessie' until I saw what was made of the latter, with Janie Dee giving us the Rita Hayworth-as-Gilda look and dancing splendidly; 'Ah! But Underneath' is for a singer, first and foremost.

No-one does it better than Cleo Laine on a treasured Sondheim disc with all orchestrations by Tunick. Heck, she could probably still sing it well at 90, as she did a fair number of songs around the time of the birthday. Weirdly neither of the YouTube clips are embeddable, but try this: https://www.youtube.com/watch?v=x4TeGlDETTs. As I couldn't find one comparable that I could embed, let's leave it there. And onwards to the Buñuel musical on which Sondheim is currently working...and that's definitely in progress, since I was told he and Thomas Adès communicated on taking The Exterminating Angel as a subject (one of two in Sondheim's case). Will mortality be the main theme? It would certainly be right.
Posted by David at 12:54

This sounds like a wonderful turnabout, and so appropriate to our times.

I'll reproduce for you some of Marianne Elliott's pertinent comments in the programme;

'I thought: this can only happen if it truly works. I didn't want to do anything gimmicky or turn it into a woman's role just for the sake of it. I wanted it to say something about a woman in this predicament, as if it had been written for a woman...A 35-year-old woman who is attractive, earns good money, has a great job and is single is clearly going to be the subject of most of her friends' conversations'.

Oh, yes, and how smart of her to see the possibilities of Company for this.