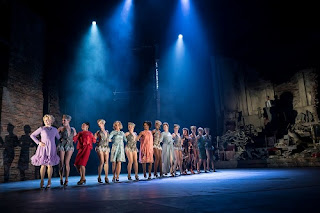 To declare the National Theatre's revival the best ever production, with the best ever cast, of Sondheim and Goldman's layered masterpiece, you'd have to go back as far as the 1971 premiere. My theatre editor on The Arts Desk, Matt Wolf, was sitting next to a man who'd been there, and he declared this was tops. What I do know is that I laughed, cried and cheered my way through the 2017 press night of Dominic Cooke's subtle staging, already the stuff of five-star raves like mine, and that it just got even better (Marianka Swain seems to me to hit the nail on the head, and eloquently so, for TAD this time). Production photos throughout by Johan Persson. 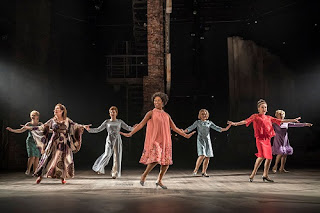 It sounds curmudgeonly to say so, but while Imelda Staunton brought her usual perceptiveness and truth to the role of Sally Durant Plummer, the former Weismann Girl who's been eating her heart out over decades for the man she should have married while wed to the one she doesn't really love, it didn't fit her like a glove in the way that her definitive Mamma Rose in Gypsy absolutely did. The lines lie quite high, really needing an accomplished singer - some numbers were transposed for IS, I'm told - and one hears Barbara Cook sometimes in the true show voice of Joanna Riding. 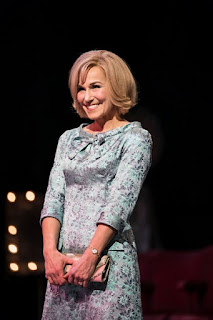 But oh, we get so much more. It's interesting that, as before, the production images don't give away what happens in the climactic 'Loveland' Follies of the four main characters, working all the better for not coming after an interval. So you see the sweet facade of Sally above, not the raging monster that breaks out of 'Losing My Mind'. The image - slight spoiler notice - of her ripping off her wig and staring terrifyingly with her clown-face at the audience is up there with the great moment of her Julie Jordan bursting out of the house in Act Two of Carousel and crying 'where is he?' (of the 'ghost' Billy Bigelow). I remember how our row rocked with tearful heavings at that point. 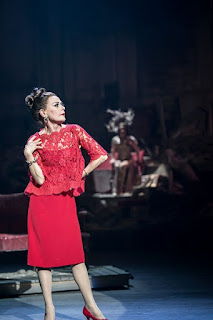 The way that key song is played underlines what Cooke does with so many numbers - has them start naturalistically and quietly, at a mirror ('Broadway Baby' and, more stylised, this one) or conversationally to friends, admirers or husband (Tracie Bennett's ever-stupendous 'I'm Still Here' - pictured above, given in full in the YouTube film at the end of this piece - and Janie Dee's cool-beginning 'Could I Leave You?' - Dee pictured below with Alexander Hanson and Christine Tucker) and then rise to heights either of theatrical defiance, on with the motley, or sheer fury. The stage persona can be as 'real' as the inner turmoil revealed. 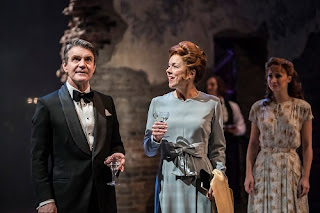 I was struck this time by how much the young 'ghosts' were interacting with their older selves, more palpably aghast at the way they'd turned out. Having a drink after the show with our former Edinburgh University Theatre Company buddy, and the best Buddy you'll ever see, Peter Forbes (pictured below), he confirmed that Cooke, even in absentia for part of the rehearsal period as he was finishing off a film, had wanted more of this. The excellent junior show singers, therefore (Christine Tucker, Gemma Sutton, Harry Hepple and Ian McIntosh) had to be 'present', emotionally speaking, the whole time. So you looked at them much more often. In any case, 'Waiting for the Girls Upstairs' is as perfect an ensemble (an octet, in fact) as Sondheim ever devised. 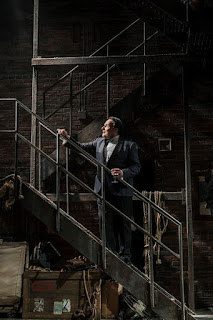 Alexander Hanson gave us a different Ben from Philip Quast, the cracks showing from the start, some very sensitive singing going on. Perhaps that meant that the ultimate breakdown felt inevitable rather than surprising, but none the worse for that. I assumed we were seeing the same Hattie 'Broadway Baby' Walker as first time round, since they looked identical, but this was Claire Moore (pictured below) rather than Di Botcher, absolutely terrific. 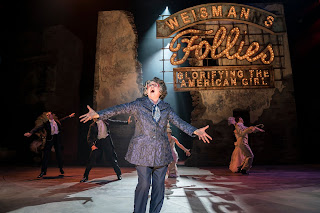 I was hoping to see Felicity Lott, taking over the veteran Austrian diva Heidi Schiller from Josephine Barstow for this stretch of the run, but she was stricken with laryngitis, and though she felt better on Tuesday morning, she gave it one more day before she was back in the bosom of people she absolutely adores (and it's reciprocated). 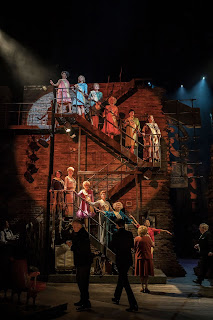 I went, lucky me, as a guest of Meyer Sound, celebrating its new partnership with the NT, and it may come across as the kind of commercial plug you keep getting, in knowing inverted commas, throughout RuPaul's Drag Race (welcome, Season 11 - it's going to be good) if I say that, yes, the quality of orchestral balance with well-miked singers really showed their part in the overall success. But what ravishing playing! Jonathan Tunick, Sondheim's master orchestrator, is hugely, sincerely impressed. Peter told us how he was there at an orchestral rehearsal at which Peter's son, a double-bassist, was allowed to sit alongside the professional player. Tunick would tweak a note here and there, hearing everything with the ear of a Boulez, re-allocating a line or two to make all the difference.

That's professional genius. And lest you ever doubted it about the master, I came across an amazing 55 plus minutes of Sondheim in conversation with André Previn which absolutely nail it, making no allowances at all for what the TV audience might or might not know. I found it when I was looking, on the advice of my Arts Desk pal Graham Rickson, for Previn's Pittsburgh Mahler 4 to add to the TAD homage I put up yesterday. I didn't find that, but I came across this - and, better still, it has the three wonderful first performers of Side by Side by Sondheim - Julia McKenzie, Millicent Martin and David Kernan - bearing out what Sondheim says about duet form, pastiche - a chance to hear the first song he wrote for 'Phyllis's Folly', not even heard in Side by Side, and breaking the song-mould. A true and generous insight into the creator's workshop, and what a brilliant interviewer Previn makes.


And we have to end with Bennett's 'I'm Still Here', as performed at an awards ceremony feting the last run. Now, I have to catch Company before it closes. Meant to go over Xmas, but ended up in hospital instead...

Sondheim truly remade the American musical—and his ability to express ambivalence in lyrics and music was surely part of the core of his genius. The Previn interview was delightful and took me back to early days of learning how to play jazz piano. My first guide was sheet music of Previns’s arrangements of songs from My Fair Lady. At the time, I only knew of him as a jazz pianist and had no idea of all the rest of his musical portfolio.

So glad you watched it - full of insights, no? And I doubt if that kind of programme would be made today (though we get something like it with Pappano's Opera Italia series). Your active connection is much more exciting than mine (I had the Previn My Fair Lady jazz arrangements on LP, but of course my acquaintance with him only really started in the mid-1970s).

Absolutely chock-a-block with insights. So glad you spotted and posted it. I have since found the LP of arrangements online and it was fascinating to listen again after all this time. I remember that fast-paced, percussive "I Could Have Danced All Night" as well beyond my piano-playing reach. The first of many excursions into jazz that ended up with me saying, "How could s/he do that?!" Nothing like trying to play yourself to enhance appreciation of the real deal.

I also came across a rather exquisite selection of songs arranged by Previn for his piano playing self and his orchestra under the title of 'Misty' - includes a really haunting treatment of 'Stormy Weather'. Would be categorised as 'easy listening', but who cares when the quality is as high as that?