Woman of the Year: a brief commemoration 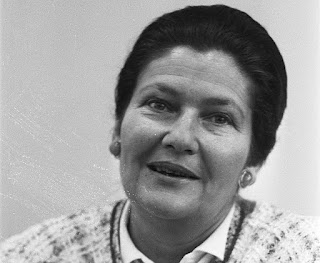 I had wanted to write more about my impressions of the toweringly great Simone Veil's autobiography, Une Vie. But perhaps a more pressing need is to salute her on International Women's Day, as a pioneer of the possible and the first President of the European Parliament 40 year ago (this July, to be precise).

A figure of unimpeachable integrity, she had survived Auschwitz and the 'death march' from there before liberation. She had seen the vital need for peace and unity in a continent which was still unsettled. In her inaugural speech, she pointed out how

localised wars have proliferated. The situation of peace that has prevailed in Europe has been a remarkable piece of good fortune, but none of us should estimate its fragility. Need I stress that this situation is new for Europe, whose history is marked by constant fratricidal and bloody wars?

Like its predecessors, our Assembly has, whatever our differences, a fundamental responsibility to maintain this peace, which is probably the most precious asset for all Europeans. The tensions prevailing in the world today make this responsibility particularly heavy, and it is to be hoped that the legitimacy bestowed on our Assembly by its election by universal suffrage will help us to bear it and to spread this peace of ours to the outside world.

Worth quoting to those who still rabbit on about 'the unelected bureaucrats in Brussels', though I suspect they are deaf beyond help now if they still persist. Pictured below: Veil at a sitting of the European Parliament in October 1979. 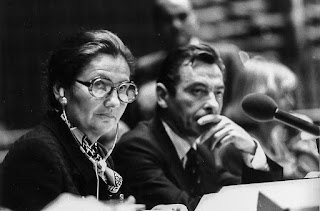 Veil also acknowledged the difficulties of a federation of national voices all needing to be heard, which is the other subject of Robert Menasse's magnificent very rich new novel The Capital, just published in a beautiful English translation by Jamie Bulloch. I'll be reviewing that on The Arts Desk on Sunday. Veil, briefly, on that theme:

The new Parliament will make it possible for the views of all Community citizens to be voiced at European level, and will, at the same time, raise awareness among the different sectors of society of the need for European solidarity over and above their immediate concerns, however legitimate, for these must never mask the fundamental interests of the Community. 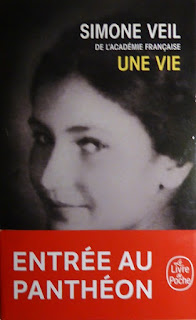 Economics are also a theme of the speech, but let's leave those aside since that seems to be all that's at stake right now.  You can read the rest in one of the autobiography's appendices. Meanwhile can I salute some of Veil's standard-bearers of integrity on the UK political scene: the late Jo Cox, Caroline Lucas, Anna Soubry, Tulip Saddiq, Jess Phillips, Nicola Sturgeon, to select a few at random. Today is one to forget those who disgrace Parliament, including our shameful so-called leader, so I won't give them a namecheck.
Posted by David at 15:09

As regards your peroration, I must enter a point which may seem merely logical, but I would suggest is fundamental. The British constitution is magnificent and has worked for centuries, coping recently with revolutionary governments like those of Attlee and Thatcher. But now a sovereign House of Commons is constrained by, first, the referendum - that device of dictators and demagogues as Attlee said ( Boris, Farage). Thus the PM (especially) and the government and indeed every MP is tightly constrained - a member of a sovereign parliament ( it still has all the powers) is not able to exercise the power to make independent decisions about Brexit, and the result is chaotic. Secondly, the party activists in the country in both Labour and Tory parties are attempting to control or are controlling the votes of MPs - even though, as as Burke says, the MP owes the constituents his or her judgement - he or she is not a mandated delegate. Again, chaos. There is no chance whatever of clear leadership or sensible votes in a Commons struggling under these constraints. Mrs May's behaviour is the result of these contortions. I would make the criticism that she does not have sufficient of the subtle and devious political skill of a Harold Wilson, who might have been able to handle this better- using to a greater extent than she can the speaking with forked tongues, chopping and changing, fixing things in back rooms etc.- undesirable consequences of an impossible situation. But even though a Wilson might have handled the situation better, no one could escape the basic fact that two massive spanners have been thrown into the parliamentary works.

Mrs May's contortions also result from what becomes increasingly clear is her psychotic personality. No mercy for her tunnel vision. But anyway you need to salute Simone Veil, who is the purpose of this post. May we see more something like her in the UK. It's increasingly looking like The Last Days of the Tory and Labour Empires.

I agree about Simone Veil, and followed up on her achievements at the time of her death. As for Mrs May's tunnel vision, what else could she have done, bearing in mind the machinery she had to operate, with my two spanners? As for Labour, a return to New Labour would be fine. And on the substance of Brexit, one can hope that Mrs May's plan will be defeated on Tuesday. A small majority would be horrible.

You know full well what else she could have done, and should have done, from a much earlier stage. She's a ramshackle disgrace in her pathological persistence. Anyway, it's all far from over...

I knew nothing of Simone Veil, clearly worthy of this recognition, and your calling out of courageous British women--of whom I am aware of two, Jo Cox and Nicole Sturgeon--is right on the mark. Thinking further on the issue of courage as it relates to the situation my way, as well as yours: As I see it, the problem that prevents some in current "leadership" in the UK, as in the US, from doing what is clearly the right thing is nothing more or less than a lack of principled courage and willingness to stand up for what is right, one's own political "future" be damned. I'm done with understanding the political exigencies that people in power face who are doing things that are destroying their countries. To hell with them all, whatever side of the aisle they're on.

To hell with them indeed. Now is not the time for mincing words or failing to act. Get that book! It's sober reading but crystal clear.

The trouble is that the people generally when electing Trump, or voting for Brexit, are not qualified to take such decisions. In the States there is nothing to be done, as the US constitution is rigid, but in the UK we should never get involved in referendums, or allow activists ( in any party) to put great pressure on their representatives ( small r ). Yet popularism and the anti-elite movement are very difficult for the representatives to resist. It is not surprising that demagogic people like Trump and Boris and Farage make an impact by shouting and wining popular votes.Or in other words, it is not the fault of ( many of the) representatives, as the idea of democracy is being prostituted. In the face of the political forces arrayed against them, the representatives are boxed in. For the UK, only a second referendum can cut the Gordian knot, since even if Leave win again at least the matter will be clearer

Agreed. The US system is the main culprit in allowing the Horror Clown to get over the hurdles of his election campaign, and keeping him there (unbelievable to us even with our own seemingly intractable problems). But at least there are brave new politicians to change the course of things there, like Alexndria Ocasio-Cortez. How we need younger MPs like that.