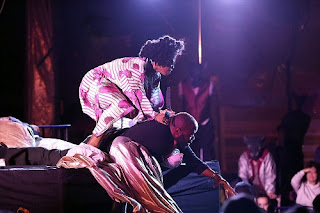 Namely as good as it can get in theatre (Simon Stone's radical adaptation and production of Medea for Internationaal Theater Amsterdam at the Barbican); in concerts (the two London Symphony Orchestra stunners to celebrate Bernard Haitink's 90th birthday - Mozart and Bruckner on Sunday, Dvořák and Mahler on Thursday); in fiction (putting my thoughts together on Robert Menasse's polyphonic masterpiece The Capital as well as meeting him last Friday); and in opera, stupendous results at the highest level of performance in Birmingham Opera Company's site-specific Shostakovich Lady Macbeth of Mtsensk in the Tower Ballroom on the edge of Edgbaston Reservoir. To which I should add the perfection of a small gallery - major collection, handsome surroundings - in the shape of the Barber Institute on Birmingham University's campus. The below is merely the atrium to the superb deco concert hall; most of the masterpieces are in the rooms on the next floor, but even here we have a famous Rodin and a Chola bronze of Natarajan. 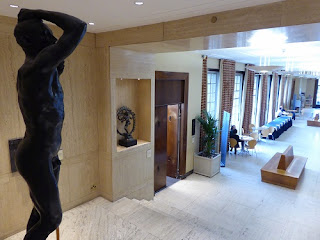 Much to say about the Barber collection, but now now. I need to take a break and simply digest after all that writing for The Arts Desk, and as there were too many good production/concert/rehearsal pics around that would otherwise go to waste, why not use some of them? The one below by Sanne Peper, of the stupendous Marieke Heebink as Anna, a contemporary Medea of excess vitality, and Aus Greidanus Jr as Lukas (Jason) with their two sons, is one I couldn't use in the review because the boys were different. And perhaps it's a bit of a spoiler as to how the ash which starts falling on the blindingly white stage two thirds of the way through gets deployed. 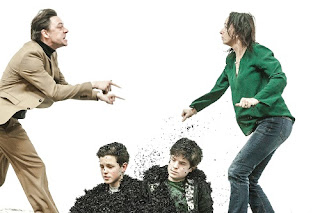 Haitink was photographed at the first of the two 90th birthday concerts by Robert Allan. You'd need to watch the film formerly on the LSO website to observe his superb control and vigilance - my friend Joe Smouha beautifully described 'the architecture spun from those tiny movements at the end of the baton' - but there's a sense of that here, albeit in a more genial moment. 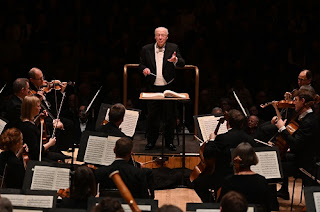 The Khovanskygate experience of 2014 told me that Graham Vick's Lady Macbeth would be opera at its communicative best. Sure, every production of it I've seen - Pountney's twice at ENO, followed by Tcherniakov's, Jones's twice at the Royal Opera - has hit hard; but the closeness of one's promenading self to the action, the involvement of all strands of Birmingham society in the chorus and acting group, make this an unrepeatable experience. I got there early because they'd asked if I would prep a group of young volunteers on how to blog their experience (it actually turned out to be how they'd present their enthusiasms about the project on camera, but we quickly adapted and I got something very different out of each - to be blogged about here very soon). This shot I took of a warm-up gives some idea of the venue, which they'd further deconstructed. The orchestra platform is left, the first stage for the action, the Izmailov kitchen, to the right. 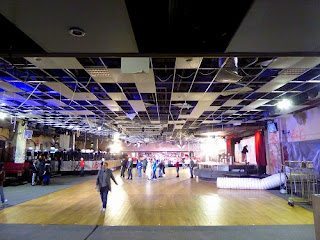 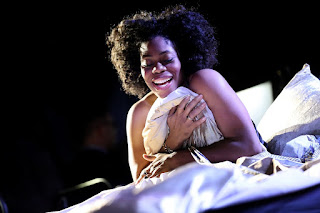 then deserted by that shit Sergey/'The Lover' (Brenden Gunnell). 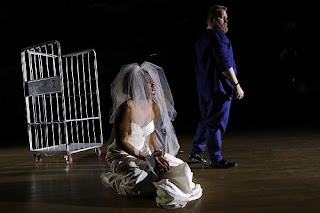 I'm more and more drawn to Birmingham, even if it did vote for Brexit by a narrow margin (would it now, I wonder?) , and however messed up the city centre. There are so many hidden delights, and each time I go I discover one or two more. It has one of our most vibrant cultural scenes, that's to be sure. Now, if only BOC could think of Prokofiev's War and Peace...problematic, I know, because Part One is largely chorus-free. Maybe that could be done in a smallish theatre and then Part Two could be theirs in another extraordinary big venue, both with the CBSO. Or perhaps The Fiery Angel with Williams, whose upper range could certainly handle the crazy role of Renata. Anything is possible with this company.
Posted by David at 08:31

I don't know how you do it--not only so many cultural events in such a short time, but also the ability to take them in, evaluate, and write about them cogently. I have noted Capital for my growing book list. I am right now reading a book on the first Gilded Age in the US that is very absorbing and with lots to say about the present moment, no surprise there. Glad to see your praise of Haitink. I feel lucky I was able at least to hear him conduct the LSO in Shostakovich's 4th and 15th symphonies a few years back.

I agree with Susan, very strongly. And I note that the title of the book you discuss in the original German was not Das Capital. Maybe the English title should have been something else. But perhaps Marx and the horrors he let loose upon the world no longer resonate, and if so that is a good thing

But the title of the book in English is The Capital, not Capital (which is how we refer to Marx's text). I can't think of any other way of rendering 'Die Hauptstadt', which as I mention in the reply changes significance from Brussels to a proposal for...somewhere else (to say where would ruin the element of surprise).

Sue, out of everything I mentioned, I think Lady M would have wowed you and J the most. People do come from all over the world - there's nothing quite like it.

Vienna would be a splendid capital for the EU if it were more central - all those very suitable buildings, built to run a set of disparate nations........

But of course it's further east than one thinks - to the east of Prague, Ljubljana and Zagreb...