Siegfried reaches Brünnhilde in the nick of time 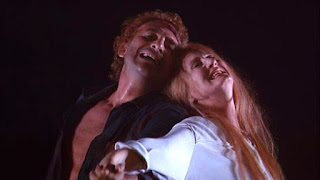 Or rather, did so on 9 March, shortly before lockdown, in the last of my Spring term Opera in Depth classes at Pushkin House. Siegfried may well be the opera I've learnt most about, loving it so much the more as a result, in all my years teaching the course. Die Walküre I already adored; there have been shorter courses on works I came to adore, but as a result not quite so much to wonder about, and certainly not over 10 Mondays.

I wrote previously here on how the sheer buoyancy of the first act and the nature-magic as well as weird humour of the second got us through difficult times (little did we realise that the gloom of 31 January would be overshadowed by something much bigger). With the final Siegfried-Brünnhilde duet we returned to the darker world and lurking violence beyond the fairy-tale, conspicuously so in Harry Kupfer's disturbing Bayreuth production with Anne Evans and Siegfried Jerusalem (pictured above). I did begin to wonder if we'd get there, given two more visits too welcome to turn down, and a third (from Vladimir Jurowski) which might have happened on the last Monday, but didn't (hopefully we'll get to see him some time during the Götterdämmerung term). 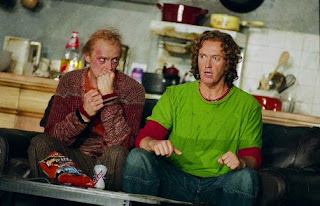 No matter; our visiting Siegfried and Mime could not have been more revelatory. First came Richard Berkeley-Steele, such a convincing stroppy teenager in Phyllida Lloyd's Ring for English National Opera (pictured above right with John Graham-Hall as Mime; Lloyd's was the best Twilight of the Gods I've seen as a staging - sorry indeed that, after the individual instalments, no complete cycle ever followed). Civilized, eloquent, witty, Richard warmed to the students as quickly as they warmed to him.

When I spoke to Richard's  wife, Susan Bullock, and Catherine Foster in a Birmingham 'Brunch with Brünnhildes', the nitty-gritty of how to survive was paramount. Another Wagner tenor I've interviewed in London, Stuart Skelton, said that while he could manage Tristan, he'd never sing Siegfried. Tristan, Richard says, is more emotionally demanding - that third act! - but Siegfried has killer traps. Consulting his well-thumbed score, he pointed out how high it sits. Siegmund in Die Walküre has a high A at the end of Act One, which is tough because he's been singing heroically in a lower register. In the first scene of Siegfried Act One, the hero has 42 high notes, all Gs, G sharps and As - and that's not even the big stuff of the forging scene (picturd below, Richard with a photo of him in that scene at ENO and his precious vocal score of Siegfried). The end of Act Two is endless top notes, ending with a top  B flat, and Act Three is tough, ending with 'that horrific final duet, 40 minutes of late Verdi. If you're doing it well, you're surfing and could go on longer, but it's a huge undertaking.' 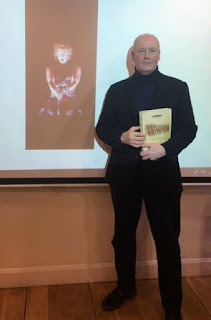 Fundamentally, though, you could sing it as 'rough-edged Tamino', so long as the conductor is sympathetic and looks after you (he cites the late, much-missed Jeffrey Tate, Vladimir Jurowski and Mark Wigglesworth as the greatest); and parts of Act Two are Schubertian. We'd been talking about Alberto Remedios, the Siegfried we'd come to admire the most for the sheer beauty and youthfulness of the sound in snippeted passages from the ENO recording, and Richard told me how he'd met him when he was a student at the Royal Northern College of Music in the 1970s. ENO was visiting Manchester with its Ring, the first time Richard had ever seen it - another box ticked here when he said he thought Norman Bailey was 'the greatest bass-baritone probably ever, and also the loveliest man' (agreed on both counts). Years later Richard was asked to audition to cover Lohengrin at ENO  - he actually sang three performances, which started him off on the Wagner path - and Alberto, by then half-retired, came in to work with singers, said 'what're you doing, kid?' (Liverpudlian accent). 'I said, "oh, I'm doing Lohengrin, I don't know about this Heldentenor stuff". And he picked me up by my coat and said, "we're not Heldentenors, we're lyric Heldentenors, and don't you forget it! Then you'll be alright'" '. That was good advice - just do it, don't try and pretend to be something you're not. 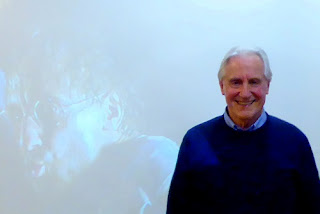 I'd love to delve into more, but for the time being let's move on to our third special guest of the term, Graham Clark, with whom Richard and Sue put me in touch. It was such a thrill to have a visit from the great man in between watching scenes of him and Jerusalem in Kupfer's Bayreuth Ring - incontestably the best duo on any film of the tetralogy I've seen (not to mention the live performance, which was one of the greatest experiences of my life). I hadn't seen him face to face for probably about 20 years, and he looked exactly the same - all the more extraordinary since he has been through two bouts of cancer, and is now - he assured us - right as rain.

What I didn't know is that shortly before he went to sing in Kupfer's peerless Ring (picturd below), he had a heart attack during an Italian performance. Given his basic fitness and stamina as a major sports coach, he recovered - and even now, at the age of 78, he'd been preparing for two cameo roles which probably won't happen owing to the coronavirus. At least the ENO Marriage of Figaro, on which he'd been working with the mostly youngish cast, got one airing before the shutdown. 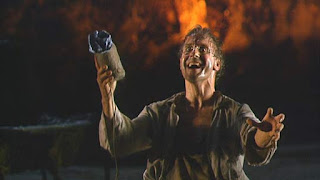 So full is Graham of an almost terrifying elan vital that I can't just sum up all the stories and insights he took us through. But I think for all of us there was a special fascination in the detail with which he discussed the different ways a Mime might enunciate the two words with which he tells Siegfried what happened to his mother Sieglinde, 'Sie - starb'. It also seems that he was possibly the only member of the cast who dared to try and change Kupfer's mind about some of the ideas concerning the role. Certainly there's not been a better characterisation, though Heinz Zednik and Gerhard Siegel are equally amazing in different ways. 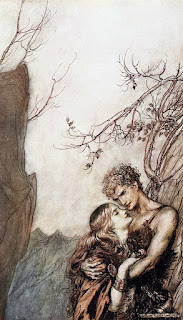 So - now Pushkin House is closed for the foreseeable future, and I have to master the art of Zoom to hold online classes for next term - ten Mondays, 2.30-4.30pm, starting on 20 April - which we divide 50-50 between Strauss's Elektra and Puccini's Madama Butterfly. I'm hoping we will still be linked up that way with Sue Bullock, who has had the singular advantage of singing not only those title roles but also Clytemnestra, as she was due to do with Kirill Karabits in Bournemouth and Birmingham before the plugs were pulled. The temporary format does at least mean folk can join in from all over the world. If you're interested, just leave me a message with your email; I won't publish it but I'll be sure to contact you. And if you'd like to learn about Siegfried in similar depth to the classes past, do join me in September - hopefully by then things will be back to something like normal - for the third year of my lecture series for the Wagner Society of Scotland in lovely Gartmore House near Stirling in the Trossachs. Full details on the Society's website here.


Meanwhile (Good Friday) I've just put up a piece about online staged Parsifals for The Arts Desk.  You'll also find Bruno Walter's incandescent Columbia Symphony Act 1 Prelude there, and here's his Karfreitagszauber excerpt sans voices. Everything is indeed in bloom right now and it's another blue-sky day.
Posted by David at 22:37