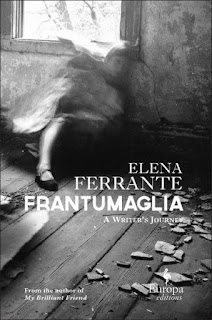 If there's a wiser book on the art of the novel, I've not read it. Here the woman who calls herself 'Elena Ferrante' tells us everything we need to know, much of it more self-revealing than one would expect. The title is explained in the 70-page essay of the same name, absolutely central to the collection spanning 25 years of creativity, and in itself containing a slice of discarded writing which will satisfy those with hunger for more of the fiction, alongside fragments of autobiography. The Neapolitan dialect word was her mother's, 'for a disquiet not otherwise definable; it referred to a miscellaneous crowd of things in her head, debris in a muddy water of the brain'. Ferrante further qualifies that as 'an unstable landscape, an infinite aerial or acquatic mass of debris that appears to the I, brutally, as its true and unique inner self'.

This debris spreads and coalesces in various ways. Ferrante describes her act of writing as made up of contrasts:

clarity of facts and low emotional reaction alterating with a sort of storm of blood, of frenzied writing. However, I try to avoid dividing lines betwen the two moments. I tend to make them slide into one another without a break.

Years later, Ferrante added that 'the act of writing is the continuous conveyance of that frantumaglia of sounds, emotions and things to the word and the sentence. Later still, she adds that she finds in her most famous creations to date, Lila and Lenù, the best capturing of herself, 'in the self-discipline of the one that continuously and brusquely shatters when it runs up against the unruly imagination of the other'. Pictured below: Gaia Girace as Lila and Margherita Mazzucco as Lenù in the TV series of My Brilliant Friend. 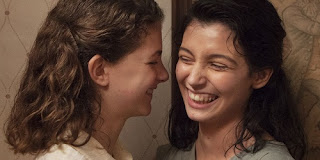 She also says of a special favourite, The Lost Daughter (which I wrote about in December), that she 'pushed the protagonist much farther than I thought I myself, writing, could bear'.

Why the privacy of the person? 'In art, the life that counts is the life that remains miraculously alive in the words...the biographical path...is only a mico-story on the side...The true reader, I think, searches...for the naked physiognomy that remains in every effective word'. Even so, it will come as no surprise to readers of her work in the round that 'Naples is my city, the city where I learned quickly, before I was 20, the best and worst of Italy and the world. I advise everyone to come and live here even just for a few weeks. It's an apprenticeship, in all the most stupefying ways'. 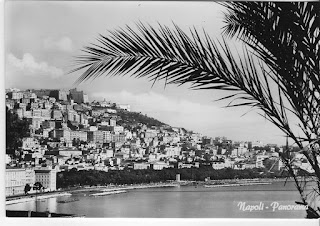 What's especially impressive is that many of the chapters here are e-mail interviews in which many of the same questions are asked; and yet somehow Ferrante always manages to keep her responses fresh, and she clearly responds to the other writer - she does so especially vividly to Deborah Orr.

I hope we can look forward to a second volume, perhaps of correspondence with Saverio Constanzo, the director of the latest, so-far magnificent and painstakingly detailed TV adaptation; My Brilliant Friend is out (since I don't subscribe to Sky, I bought a cheap DVD set) and The Story of a New Name is imminent. For the early stages of Frantumaglia, which might perhaps only be of interest to those who have already read the novels in question, deal with adaptation to screen. Two separate passages which I've conjoined just about nail the nature of the beast (and apply very well to opera directors too):

The real problem for a director is to find solutions, the language with which to get the truth of the film from that of the book, to put them together without one ruining the other and dissipating its force...I don't care for directors and screenwriters who approach the book with arrogance, as if it were a mere catalyst for their own work. I prefer those who dive into the literary work, taking inspiration from it for new ways of telling a story with images.

The other to-be-continued aspect is taking up Ferrante's lists of literary loves and exemplars. I've bought copies of three so far: Nancy Mitford's translation of Madame de Lafayette's La Princesse de Clèves, a lethally elegant tale of a moral woman in a gossipy court; the hitherto-unknown-to-me name of Ukrainian born, Brazilian based Clarice Lispector, whose experimental style in Near to the Wild Heart, a study in existential introspection, I found hard work; and, last but for me first, Elsa Morante's Arturo's Island. 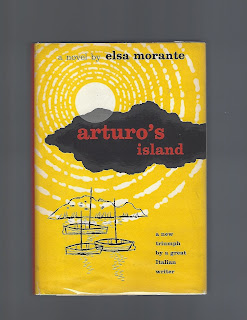 Arturo is a boy left to grow up more or less alone on the island of Procida; his mother died giving birth to him and his fatuous father comes and goes at random. We see everything through the protagonist's eyes, with an air of mythology brought about partly by Arturo's reading: the handsome parent he hero-worships, the girl only two years older than himself given up to an uncaring husband. A woman's perspective on woman as chattel is a fascinating one, and her understanding of the confusions brought on by puberty seems masterly. The translator is Ann Goldstein, Ferrante's own choice. Like her own novels, it's a bewitching, disconcerting read. I made a start on The Conformist by Morante's husband, Alberto Moravia (also next to her on the bookshelves), which is bound to be extraordinary, but interrupted it for Mantel's The Mirror & the Light, no comedown. All the same, it's demanding careful attention over time; I expected nothing less. Never was an all-absorbing slow read more needed than right now.
Posted by David at 14:30

Haven't yet dived into Elena Ferrante's world (although one of her books is on my shelf, a fortuitous find at a Little Free Library), as the big social distancing reading project here is Proust. I'm not giving it anywhere near the detailed reading or attention that one ideally should, but life is short, perhaps shorter now, and Proust is obviously anything but short. The full set had been sitting unread for decades now, but if for no other reason than to say, hopefully, that I've done it, I've taken the plunge.

BTW, to take the other thread, if you want to catch Stephane D.'s final SLSO concert for another day:

I was honestly unaware of DC's use of the H.I. phrase, as I meant that phrase in its true scientific context, and not its debased political context.

Thanks, Geo. I've done the Proust thing once, and wouldn't re-read the whole, only parts (the first and last books, certainly). It seems to me to get awfully tedious when he's wondering what Albertine is getting up to with her little friends. I've constantly made the fatuous declaration that the boring bits could be supplanted with Colette's writings (certainly much more entertaining). In other words, the editor would have come in useful.

By way of contrast, Mantel Wolf Hall Vol. 3 is a slow, but not a hard, read (as I think I wrote above). Nothing there I'd really want to lose.

Thanks for the reminder about the Deneve concert - must listen.

Re 'herd immunity', I'm sue you did. CoronaDom, now part of the herd (something he must hate), applied it unhelpfully. But it's a terrible term, isn't it?

Imprisoned, we should (perhaps) read books that we would not read in our normal life. And usually this points inter alia towards long books, which we would look at in normal life and shrink back.......or start and give up when we realise that we have hardly started on such a long text. So Proust comes into the picture, and I would argue that it has a special attraction in that it is a window on the French mind. Also this is the sort of book that should be read slowly, taking the meaning out of each paragraph. Indeed the greatest novels are not only stories.

Yes, well, as I wrote, I have no intention of re-reading the whole thing. I think for these times a more human epic, like Don Quixote and War and Peace (my two personal favourites for re-reading), Mantel's Wolf Hall trilogy or Ferrante's Neapolitan tetralogy might take priority for those who haven't read them. Proust is fine if you're up to the rigour.

I was remiss about not informing you about the Stephane D./SLSO webcast earlier, as tomorrow (7 April 2020) is the last day of its availability; my bad there. Hopefully you have a chance to give it a listen either today or tomorrow. I was actually at that Saturday night concert featured on the broadcast; splendid, splendid concert experience in Powell Hall.

When and if I survive Proust, other unread potential long reads on the shelf are Michael Holroyd's triple-decker bio of GBS, and 3 out of 4 of Henry-Louis de la Grange's bio of Mahler. The few bits of HLdlG's tomes that I've sampled warn me of the accuracy of one A.com review of them, to the effect that "de la Grange worships Mahler and will not permit him the slightest fault".

Both of those are excellent reads. And whether that's true or not about HLdlG, he does know more about Mahler's life in detail than anyone, I think.

Should be able to listen in time. Tonight I've got to see Complicite's The Rake's Progress from Aix, currently free to view on the company's website, since the i decided it wanted Arts Desk condensed version first thing tomorrow morning.