Raising a mug to Prokofiev on his birthday 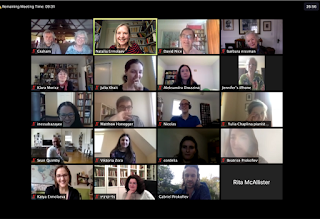 Serendipity has been at work. Last Wednesday I had the loveliest email imaginable from a lady I'd never met or corresponded with before, Jennifer B Lee, Curator of the Performing Arts Collections in the Rare Book and Manuscripts Library of Columbia University. She'd got my email from a mutual friend, the pianist Barbara Nissman (pictured in the top right hand corner above). Trying to avoid humblebrag, in short Jenny wrote so many kind and positive things about my Prokofiev biog Vol. 1 that it was enough to fire me up to get on with the many-years-delayed Vol. 2 (really, I am). The point, though, is the connection with the Prokofiev Archive, and her delight that I had worked my way through the 40 boxes of papers in the Archive when it was based at Goldsmiths College in London.

The tale of how the Archive went to New York is, in my opinion, a sorry one, and I wanted nothing to do with it for years. That, it seems, is all in the past now, and now the Project Archivist for the Prokofiev Archive, Natalia Ermolaev(a), seems like a splendid person. Jenny told me that Natasha was co-ordinating a Zoom birthday greeting to Prokofiev to make up for the cancellation of a conference at which many of the participants would have been speaking.

They included members of the Prokofiev family - Frances, widow of the composer's much-missed younger son Oleg, now living in Norfolk with her partner Graham (that's them in the lead pic, top left), and three of the grandchildren - Beatrice, Cordelia and Gabriel, who of course has forged a big reputation as composer himself; he was sitting in a garden with wisteria behind and birdsong adding to the soundscape. Assorted babies and small children enhanced the picture. Serge Jr., son of Oleg's brother Sviatoslav (also much missed), sent apologies that he couldn't attend, and I had been so hoping to see one of my favourite Prokofiev people, Natasha Savkina, from Moscow, but she couldn't 'come' either. I won't list the scholars from all over the world - you can see them on the screen - and would just add that I asked a New Best Friend,  pianist Yulia Chaplina, to join from London. Natasha E invited us all to speak in turn, and at the end we raised whatever we had to hand (in my case an empty coffee mug) and I attempted to sing 'mnogaya lyeta' as we always used to intone it in the Kalina Choir (see below), but it needs harmonies underneath... That, as it happens, is Bortnyansky's version


But Prokofiev also provided another one for Eisenstein in the film music for Ivan the Terrible.


The most serendipitous aspect of this all - and here, though rationally I don't believe in such things, there's a small part of me willing to leave the door open to the unexplained - is that without the prompting I would have probably forgotten Prokofiev's official birthday (27 April is the other candidate, owing to clash of statement with birth certificate). And when I remember it, I call to mind more vividly that my beloved Noëlle Mann, the driving force behind the Prokofiev Archive, with whom I collaborated over quite a few precious years, died on the same day. So I was able to go back to my blog posts marking the sad time - which turned into an unexpected kind of visitors' book for tributes to her in the messages - and the wonderful memorial concert, and honour her by talking about her with the group (many of whom never met her). It turns out to have been exactly ten years since she died. 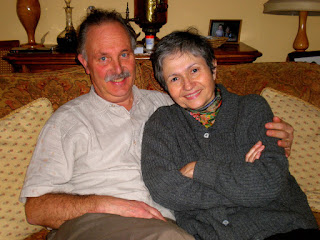 Above is the photo I used at the head of one of those pieces, of Noëlle and her splendid husband Chris (whom I was in touch with briefly last week) at the time of my last visit to her a few weeks before she died, when she was tired but full of plans for the larger future of SSP and encouragement as usual. I think I probably remark on the post about how I admired an old oak at the top of Greenwich Park on my way back, and how I saw another in leaf on the other side at the time of her funeral: not only did the connection with Prince Andrei and the oak in War and Peace seem curious, but Chris told me that the former tree was her favourite, and I couldn't have known that. Here she is celebrating a happier anniversary, 25 years of the Prokofiev Foundation, with Serge Jr. at the Barbican premiere of Prokofiev's original Romeo and Juliet score from the Mark Morris Dance Company. 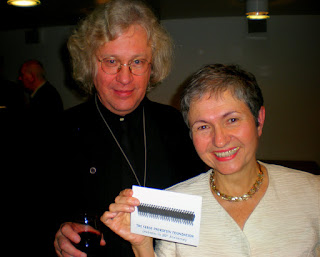 So many friends and great names have been lost since it all began - as well as Noëlle, Sviatoslav and Oleg, also Christopher Palmer, Alexander Ivashkin (who was heartbroken over the removal of the Archive), Viktor Varunts, Ted and Joan Downes, Rupert Prokofiev and my Russian teacher Joan Pemberton Smith (best known as a translator of Russian opera librettos and songs. She also sang, as I did, in the Kalina Choir conducted by Noëlle, and left an amount to help me get on with Volume Two - I need above all to honour my pledge to her and Noëlle). I'm sure I've omitted a significant name or two, so forgive or prompt me if you're reading this. I also hadn't heard until Frances told me about the death from C-19 of Dmitri Smirnov, married to fellow composer Elena Firsova and father of a wonderful person who's since become a friend, Elena Firsova, another composer and a spellbinding pianist. 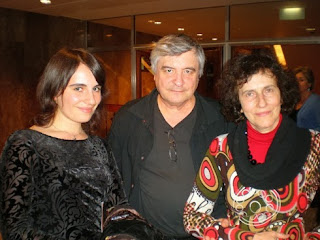 This is all three of them at a stupendous Festival Hall concert in which Michail Jurowski, father of Vladimir and another great Prokofiev champion, conducted Schnittke's vast First Symphony. It was my first experience of it live, and predictably it blew me away as Vladimir's performance of the Third had some years earlier; but Dmitri and Elena had been present at the 1974 premiere in Gorky (now Nizhni Novgorod), which caused such a scandal that it was banned in the Soviet Union. Not only were these two fascinating in their insights, but I warmed to them immediately and wish I could have spent more time in Dmitri's company. Hoping to see Alissa and catch her in action when all this is over.
Posted by David at 14:34

What a truly wonderful story David!
Here's to you and Prokofiev!

Thanks, Josie. It was just one of those times when everything connected. And just think, without compulsory 'retirement', the Zoom meeting wouldn't have happened, either.

I am so glad to know you are at work on V2. This is a wonderful tribute to the magnificent Prokofiev, whose piano concerti were among my very first thrilling ventures into classical music. I come late to celebrate his birthday, but I hope it's never too late to raise a toast to Prokofiev--and to you, his stalwart champion.

As regards the second Prokofiev volume remember J's remark that one can eat an elephant if one consumes it in small portions. And I can recommend one of my own methods when faced with a similar challenge to intellectual and moral energy. Forget the start or anything to do with the order of the work. Seize on one element in the proposed text that is in your mind ( however minor) and write that up. Then another of the same. And after you have done half a dozen disparate bits some of the bits will trigger other bits and then the energy to attack the whole thing will emerge.

Thank you both for your kind encouragement. I already have two chapters written and my feeling is I should just go on chronologically, but I do need to look over all the notes I've written on so many of these late-period works and see what I need to do to them. The concise phrase is 'you can eat an elephant in bite-sized chunks'. Where to begin and end, though, with the voluminous life-to-date of the great Sir D Damant?

Must confess that I've never gotten around to reading Vol. 1 of your Prokofiev bio, although it is in the local university library there waiting, if and when things open up again. The only bio that I've read is Harlow Robinson's one-volumer way back, which has a nice inscription by him when I cadged his autograph at a pre-concert talk in Boston back in the day. Good to know that you've started on Vol. 2, and hoping for a successful finish with it.

Speaking of Prokofiev, Gemma New was supposed to conduct Prokofiev 5 with the SLSO last month, but that didn't happen for obvious reasons. Did you get to hear that one Stephane D. concert BTW? From the Berlin Phil's DCH, I watched Yuja Wang and KP with Prokofiev PC #3, and Dima Slobodeniouk conducting Prokofiev 2, the closest that I'll ever get to hearing the Second Symphony live. Stephane is a big Prokofiev fan, but I doubt that the SLSO management would let him get away with programming the Second Symphony.

Also, on the subject of composer bios, one other big read that I neglected to mention was David Cairns' 2-volumer of Berlioz, in addition to Proust and the other big reads. Have finished Volume 1, and am at the point in Volume 2 where HB is about to embark for Germany.

Just think, if you bought a copy, you'd give me a tiny royalty and I could eventually sign it should we ever meet. Harlow Robinson's biography is very good - lively style.

No, I didn't get to hear that concert in the end - too many rival claims, though as you know I wanted to.

Cairns' Berlioz is a model of its kind though crazily, without music examples. We're told that including them means we won't get reviewed in the Sunday papers. I argue that it's a bit like an art book with no reproductions. Big battle with Yale - I had to pay for setting of them in Vol. 1, they finally agreed to an upper limit of 60 they'd pay for in Vol. 2. I didn't realise that you actually pay to write a book regarded as 'academic', but sometimes you just have to do it for the greater good of music.