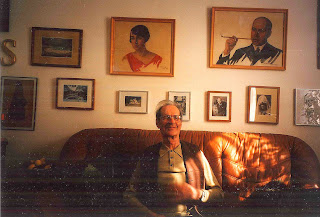 Sviatoslav Sergeyevich Prokofiev, the composer's elder son, died in Paris on 7 December. He was 86, a grander age than I'd (mis)remembered, but I feel sad that I hadn't seen him over the past couple of years - he was too unwell to travel for any of the more recent Prokofiev events. We were not expecting to have to mourn/celebrate anyone other than our dear Noelle Mann at her memorial concert on Wednesday, but in the event Sviatoslav's death cast me back to all the others we have lost in this sphere - his younger brother Oleg, his wife Nadezhda, Christopher Palmer, Ted and Joan Downes, Viktor Varunts...I'm sure there are others I haven't recalled.

The above photograph was taken when I visited Sviatoslav at his Paris apartment and was royally welcomed by both him and the warmly hospitable Nadezhda, who died not long after our meeting. In addition to going over his memories, he'd kindly looked over the chapters of the book in which he played a part, and made detailed, helpful suggestions. He was always courteous, slightly shy but not exactly reserved, and like his brother suggested that, whatever the problems over the years, Sergey and Lina had always been loving parents who instilled decent human values in their boys. There's a fine interview with him on one of the Prokofiev websites. As I've said many times before Sviatoslav's son Serge Junior looks more like the great man than either of the sons; it's always quite uncanny meeting him. Our thoughts to him and his family. On which note, while looking at the memorial on the sprkfv website, I came across this lovely group picture taken in 1997. 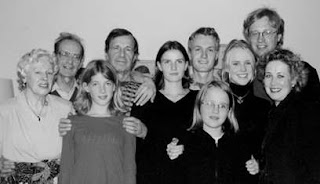 By no means everybody's there, but the ones featured are, left to right, Nadezhda and Sviatoslav, Beatrice, Oleg, Cordelia, Gabriel, Nika, Lina, Serge Jr. and Irina.

The concert, which inevitably Serge Jr. wasn't able to attend, was a total triumph - I imagine that anyone in the surprisingly large audience who had come just to hear the music and hadn't known Noelle would have been very much enriched. As we knew they would be by Dmitri Alexeev's almost frighteningly well articulated account of the Sixth Piano Sonata, which had most of us leaning forward in our seats no doubt with hair standing literally on end.

But I was also especially moved by hearing Barbara Nissman's big, warm piano sound in the perfect space of the Queen Elizabeth Hall. It took me aback when Chris Mann came on to introduce the programme and the applause just went on and on. So, feeling like blubbing out loud, I was duly centred when Barbara launched into Liszt's surprisingly restrained transcription of Bach's Organ Prelude and Fugue in A minor BWV543, followed by crisp Prokofiev and the ineffable Rachmaninov G flat major Prelude.

Sasha Ivashkin, I'll hazard, gave his best ever performance of Prokofiev's Cello Sonata, cushioned and given room to breathe by Alexeev's incredibly sensitive piano partnership (at the 2003 St John's Smith Square concert organised by Noelle, Sasha had been partnered by Mikhail Rudy, while Alexeev made a superb team with Dmitry Sitkovetsky in the First Violin Sonata). I always turn to the cello sonata's middle movement in Rostropovich's world premiere recording with Richter, when of course the ailing composer would have been in the audience, for the gorgeous melody at its heart. But I hadn't rated so highly its counterpart in the finale until I heard the way Ivashkin and Alexeev conveyed its introspective soul. Alas, there are no professional shots of the event, so you'll have to make do with my makeshift pic of the three artists receiving flowers at the end. 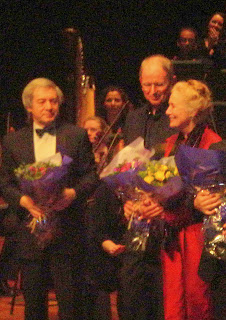 There were so many interesting folk to see in the interval that I was almost late for joining the Goldsmiths Chamber Choir at the beginning of the second half (out came the horrid black Armani shirt which I'd bought half-price in Jermyn Street before my first Kalina Choir concert with Noelle). As Chris said, Noelle had never been able to marshal as large a choir as this in her lifetime, so she would have been pleased. We sang Tsar Fyodor's 'Dostoino yest' as harmonised by Ossorguine and Kastalsky's Cherubic Hymn.

I had the option of joining Goldsmiths forces for Prokofiev's apocalyptic trailblazer Semero ikh (Seven, they are Seven), but declined with two excuses: that one afternoon rehearsal probably wasn't enough, and that I wanted to hear it in the hall. I'm glad I did, because it sounded extraordinary: what quality from the glissandoing, growling augmented brass section, what a wail the sopranos set up in one of the weirder incantations. Here's a suggestion of the forces at the end of a very varied and emotionally rather exhausting evening. 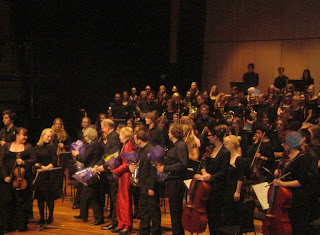 Glad we had the chance to recollect in tranquillity at Deptford Town Hall last night. Sasha chaired reminiscences from myself, Barbara, Simon Morrison, Nelly Kravets (who nearly had us all lose it by reading Noelle's last e-mail to her) and Fiona McKnight of the archive.That, too, has been recorded so I'd like to recapture what passed in a bit of a haze. But I was delighted to see a former student, Yumiko Nunokawa, who travelled all the way from Japan with Shin-Ichi Numabe (Nelly, by the way, had come from Tel Aviv, Barbara and Simon from America). More on our meeting in another shorter entry.

Afterwards, Chris treated us to a meal in the Greenwich Cafe Rouge, a lively occasion which I know Noelle would have liked (could earlier hear her saying 'enough already!' as we got to the end of our tributes). Here's the stalwart Mr Mann, who's very blunt about simply getting through the time since Noelle's death but always seems able to pull himself together and rises to the occasion, with Barbara (partly because I loved her winter wear). 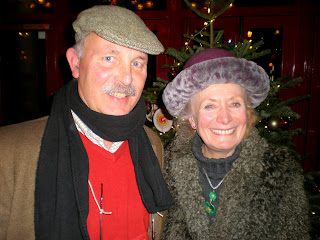 We promised more get-together music making and feasting to remember our doyenne at least once a year.
Posted by David at 15:08

Thank you, David. It's a great event, I think.
sprkf.jr

It truly was a great concert, and was so happy to be a part of it, especially performing such a neglected work as Seven, They are Seven.

David, I wish I had realised who I was standing next to in the choir... I'm such a Prokofiev enthusiast, and actually had your book on Prokofiev in my bag with me!

Such a shame Serge Jnr couldn't make it, thoughts are with the family.

Shucks, Paul, thanks. I'm glad for selfish reasons that your Goldsmiths performance of Seven the previous Friday was cancelled due to 'adverse weather conditions', because that gives me a chance to hear it in January (date TBC, keep me posted), so Sasha tells me.

And maybe, having heard it from the hall last week, I can join in if I have a look at the choral part first...

Yep, I'll make sure I post it here as soon as I find out.

'The Sinfonia concert has been re-scheduled for Friday 21st January, but minus the Prokofiev'