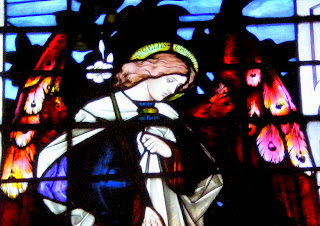 I owe all those of you who donated so generously to our Norfolk Churches Trust walk a final figure, which in the face of bad weather has been sent by our tour leader express delivery to Mary Heather of Burnham Thorpe. Between the four of us, we raised £1003.94.

That's not quite our record, but it's been less of a giving year. And much as we love to honour the memory of Jill's mother, one-time stalwart warden of 'the Nelson Church', by doing a different route every year - and we're well past the hundred mark in the number of churches we've 'collected' - it is a bit of a drag on friends and acquaintances to be chugged* at the same time for the same thing every year. But thank you: the restoration of deserving, sometimes deconsecrated causes in this delightfully over-churched county is much needed.

I've duly posted church pics throughout the year, but a few worthy edifices much further from the Norfolk epicentre got through the net, so I thought we'd stick to the angelic theme. The voluptuously winged Gabriel above and below is one of Henry Holliday's pre-Raphaelite windows for Oxford's Worcester College Chapel (Millais's original designs were rejected). 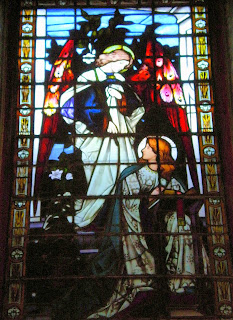 The chapel, lavishly restored in 2001, makes an interesting ensemble: Wyatt's original 1791 interior was redecorated, and not entirely obliterated, by William Burges in 1864-6. The ceiling is very much his. 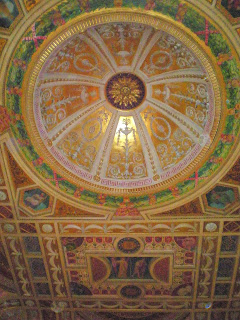 Of course no handsome winged thing could quite outstrip the Vidal Sassooned St Michael of Eastbourne - he attracted some attention way back, so let's have another look at him here. 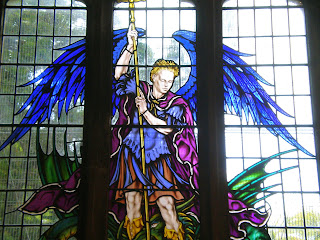 Among the casualties of excessive impressions was an account I wanted to post of our several hours in Udine on the way between Trieste and Tarvisio in June. The splendid ensemble of the central piazza will have to wait for another time, but above all Udine is Tiepolo Central, and though I was thwarted in my attempts to see the big Tiepolo exhibition there and the selectively open Oratorio della Purita, I did get to see inside the Duomo. Its hotchpotch of styles includes quite a few treasures, not least the painted organ shutters and the south chapel so elaborately frescoed by Giovanni Battista Tiepolo and Urbani. The guide is hopelessly confusing on who did what, but I'm assuming GBT was responsible for the angels. 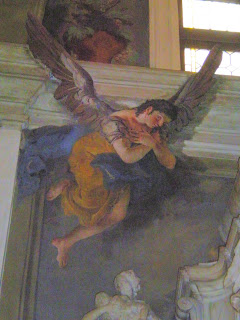 The trompe-l'oeil winged chap who looks out so beguilingly is part of this ensemble. 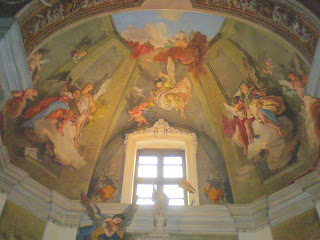 Up the hill on which the castle is situated, there's a bronze angel atop the church of Santa Maria di Castello which spins in the direction of the wind. We stopped off on the way north in baking heat 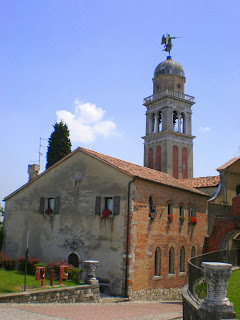 and returned between violent storms, when he was more inclined to swivel. 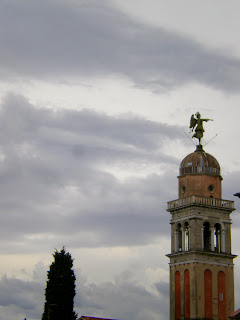 Last but not least, let's return to St Nicholas's Chapel King's Lynn and one of the finest of all angel roofs. 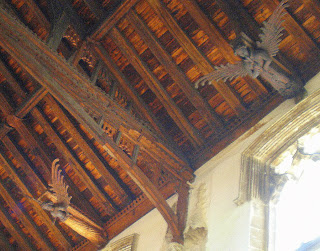 This I've covered before, but since the chapel of ease is run by the Churches Conservation Trust, it's a perfect example of the first-rate treasures we're walking to help finance.

*that necessary footnote again: 'chugging' = 'charity mugging'. Though since we do it by email rather than putting the poor unfortunate on the spot, I think ours is more in the manner of a friendly suggestion.
Posted by David at 17:05

So would that be frugging rather than chugging?

On a separate but charity related note, last night we attended the RAH en masse for a BT Christmas Concert (money goes to Childline), complete with "I'd Do Anything" TV show belter, City of London Choir, military brass band etc. etc. (Come to think of it "I'd do anything" neatly sums up the whole X-Factoresque TV plague.)

Why? you may gasp horrified.

Because Youngest Daughter was performing in it with the BT sponsored steel band having been recruited from her school (and we had comps).

Good in parts, the best bits being singing along with the carols and chrissy songs - quite something among a full house RAH audience - blowing up and banging paper bags for the 1812 Overture, and the spectacular fireworks in the finale.

Perhaps not quite as rousing as the Last Night but lotsa fun, courtesy of the enterprising Mr Gubbay.

Hoping your dolly eek is now recovered from losing its argument with a metal post - you could have waited and got it in a better cause as a protester in Whitehall assaulting a policeman's truncheon with your head. Have a wonderful yuletide and a peaceful new year!

I won't knock the populist-impresario 1812 effect: my first concert was a Hochhauser Tchaikovsky spectacular conducted by Hugo Rignold in that same colosseum. Trust you heard Rowan loud and clear.

And your wishes for recovery are better late than never. I DID expect a bit of sympathy from the Suthren-Lanes...Actually the argument with the post took place at the very same hour that Millbank was burning. Something in the stars that day.

We have been highly sympathetic in South London although we have had our own not too serious but rather disabling problems to contend with, so apologies for not expressing it sooner.

One result is I will be cooking the (veggie) christmas dinner this year, so it may not be such a happy christmas after all...

We were in the circle so the steel band could have done with a bit more volume for us. But it's quite a filip for Rowan - it's not a children-only band and performs internationally. And she has the pan at home to practise on so I get a chance to play it as well!

Oh dear, hope that's not ominous - tell me more, by e-mail if you prefer. Anything that has you cooking the Xmas dinner must be grave.

Anyway, season's greetings to all the family.

One fears that in these politically correct days St Michael ( and St George) would be prosecuted for killing a member of an endangered species, now extinct as a result of their efforts.

Ah yes, but St Michael's was only old Nick in disguise.