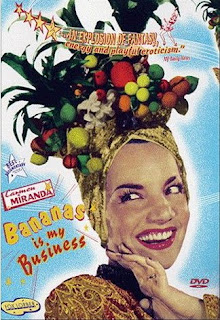 Some people say I dress too gay,
But ev’ry day, I feel so gay;
And when I’m gay, I dress that way,
Is something wrong with that?

You've got to love a woman who sings that, and in perhaps the most outrageous Hollywood production number ever (see below). I feel a little, just a little guilty about twinning the great Carmen Miranda with hats of a slightly more sacral variety. These come courtesy of our beloved and equally fearless drottning-diva Sophie Sarin, whose Djenne Djenno blog - as I've written many times before - was the inspiration for this far less exotic specimen.

Anyway, it takes me back to the witnessing of a real festival this time three years ago, when our Christmas and New Year visit to Mali coincided with the big tabaski festival. So all of male Djenne was out in its finest boubous, with rivers of blood from sacrificed sheep and goat running through the streets. All less authentic ritual thereafter, not least the horribly packages maskdancingfordollars of the Cotswoldised Dogon Country, was a disappointment.

So what I wouldn't have given to see an even more elusive rite, by virtue of the fact that it's only usually decided a day or so in advance, thus evading all but the luckiest and well-placed of tourists: the Fulani tribal shepherds crossing their cattle from the pasturelands across the Niger to Diafarabe, where they're greeted with prizes for the best-kept herd - the least impressive gets a peanut - and the demure arms of the local girls. Whose headgear is, in its way, just as impressive as Carmen's, with real amber and gold. 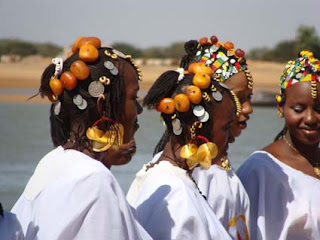 Sophie was thrilled to see hunters gracing the ceremony this year, and so of course was I. 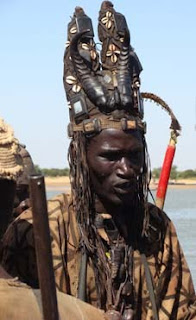 Two more she didn't put on the blog, but sent me anyway, of the rite itself. 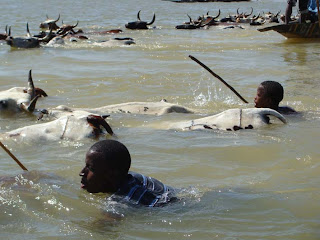 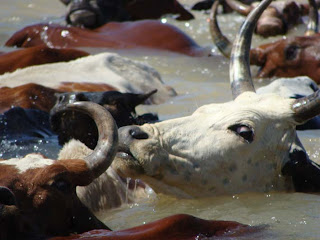 I seem to remember from our two day journey down the Niger from Timbuktu that the bodies of the less unfortunate cattle were still floating in the river in late December. Most, I assume, make it.

Anyway, yes, they have some bananas in the Hotel Djenne Djenno garden. But none as big as the ones waggled by the chorenes in this. The musical arrangement is positively Milhaudesque. Enjoy.

Big bananas to you. Keep well, keep warm (keep the ashes) and may 2011 be a year of very long takes, they don't do them like that anymore.

Terrific photos on your site, wanderer. Glad to have discovered it. Mutual auspicious wishes.