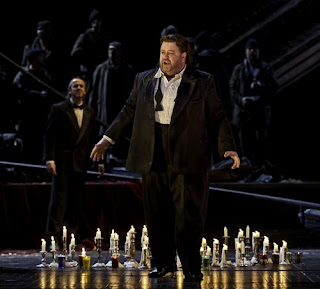 That's Johan Botha, whose Tannhauser we finally saw and heard for ourselves at the Royal Opera last night (production photos for the RO by Clive Barda). He is, as my controversial colleague Igor put it in a hyperbolic but mostly spot-on Arts Desk review, 'the size of a small Eastern European country', which wouldn't matter if, like Jane Eaglen in her brief golden era around the early 1990s, he acted with the voice. But he doesn't, really: one thrilling moment when he pauses before doing his no-absolution-Pope impersonation apart, the valve to his soul is indeed sealed shut. Laser-like, the heldentenor voice is infallibly secure and useful, but I'd rather hear a half-golden singer-actor able to put across the fathomless anguish of Tannhauser's state in Act 3.

The native German speakers were the ones who best expressed what meaning is still to be found in Wagner's hopelessly dated tale (Rome, shmome): sensual indulgence bad, pure Marian love good. I've admired Michaela Schuster since we saw what must have been an early performance as Kundry in Graz. The voice isn't sensuous, but it is rich and clear. Unfortunately Venus's clunky entreaties, mostly 1840s stuff, come on the heels of Wagner's most radical music, the 1860 Paris ballet, which ultimately was the most thrilling thing in the show as choreographer Jasmin Vardomon got her dancers to roll across a big table at furious speed. No mean achievement to sustain given that the curtain rose a third of the way through the overture and wave upon wave of orgiastic sound had to be varied. 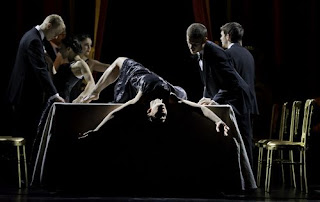 Everyone said that the top-quality Gesamtkunstwerk package of the evening was baritone Christian Gerhaher, and everyone was right. How refreshing not to hear a manufactured dark sound, every colour in place and a fullness to match Botha's when necessary. He even got around the problem of the recit to 'O du mein holder Abendstern', low-lying enough to justify a bass-baritone like Terfel (who sings it gloriously on a Wagner solos disc conducted by Abbado). So Gerhaher slips in at the last minute as one of my singers of the year, along with Terfel as Sachs and the lustrous double act of Anna Samuil and William Burden as the best Donna Anna and Don Ottavio I've heard in the much-better-than-anticipated Glyndebourne Don Giovanni. Here's Gerhaher with Eva-Maria Westbroek's slightly spread Elisabeth at the end of her tether. 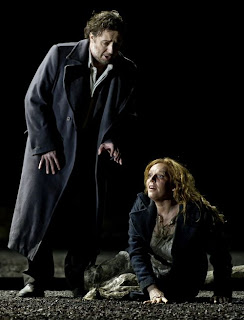 Everyone also said that Bychkov's conducting was a revelation. I part company a bit here: the balances were exemplary, details and colours superb. But he lacks the forward-moving sense of phrase which would paper over the longueurs in the score, and which did when Welser-Most, not a conductor of whom I'm hugely fond and due to conduct the New Year's Day concert tomorrow, brought Zurich forces to London for a concert performance. I still think that Tannhauser is the Wagner opera which gains least by being staged, and though I liked Albery's idea of Venusberg, the shelled Balkan Wartburg didn't communicate much to me. And had I spent a fortune on my seat, I'd have wanted a bit more design for my money. So, a good and at times classy evening, not a great one. And roll on six or seven weeks on the opera back at the City Lit.

Heck, I got more frisson out of Salad Days at the Riverside two evenings earlier, but that was probably partly because, as I wrote in my Arts Desk review, I was reliving a teenage am-dram production. Anyway, it really is all the more charming for not sending Julian Slade's froth up too much. And the piano playing with its intricate improvisatory counterpoint is a joy. Here are young Katie Moore and Sam Harrison as Jane and Timothy leaning on Minnie the magic piano (photo for Tete a Tete by Roy Tan). 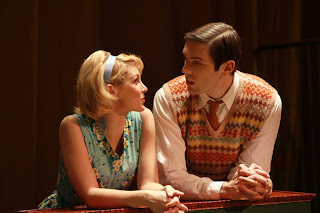 Following the novel pattern of last year's break with travel and instead spending the hols at home or with friends was again the right thing to do. We watched selective TV between earthshattering bouts of reading and eating, and enjoyed most of what we saw. I was utterly smitten with the Birmingham Royal Ballet Cinderella shown on the 25th and still available on the BBC iPlayer for two more days - not just with the predictable beauty of that genius John Macfarlane's designs, but also with aspects of David Bintley's graceful storytelling and the captivating mug of Elisha Willis in downtrodden mode. The two production photos by Bill Cooper also feature Iain McKay's personable prince. 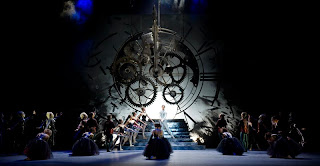 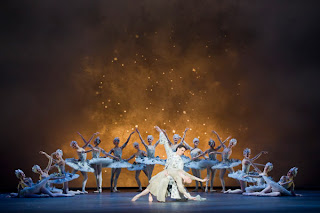 Above all, I was amazed by the suppleness and nuance of Koen Kessel's Prokofiev conducting (have you any idea how hard it is to find his name among various credits?). Another ballet master to watch, like Paris's Vello Pahn. Lucky Brum not to get the piped, overamplified music which accompanied Matthew Bourne's New Adventures version. Which still has its own special claim in making narrative sense of the Act 3 divertissement cut by Ashton, Bintley and Page.

Wasn't to be honest expecting great things of 'the Rattle Nutcracker', on the evidence of recent Berlin Phil disappointments. I'd got it into my head that Rattle, like Bychkov, does the sound but not the longer vision. But this doesn't always apply - there are revelations in his latest Mahler Resurrection, shame about Kozena, and here the Berlin team as well as their sound team are so obviously in love with Tchaikovsky's layered score (who wouldn't be?) Sometimes the finessing is a little over-finicky, but the spirit seems right. 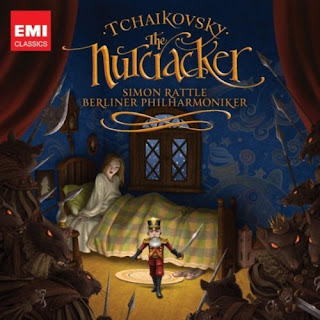 There's a terrific crescendo in the Christmas Tree transformation, wonderful spotlighting for celesta and harp, a joyous Mother Gigogne and a swooningly beautiful Pas de deux. I wonder where this would stand if it had come out in time for my Building a Library. Whizz-bang Gergiev was then tops, but it's not only Rattle who's appeared in lights since: Lanchbery's light and fizzy Philharmonia version has been reissued, complete with specially orchestrated English jig (I saw this, and Mother Gigogne, danced when I went as an eight-year old to the London Festival Ballet production). God, how I adore this ballet - its bright lights are such a tonic after the slightly subdued parade of carols.

Choice of the year? Timely you asked, since Igor has just put up all our bests of classical and opera on The Arts Desk. No competition for the operatic prize, Bryn as Sachs in Richard Jones's Welsh National Opera Meistersinger, alongside my Best Concert of All Time, Abbado's Lucerne Festival Mahler Nine. Rumours abound that ENO may be encouraged to take on Jones's fabulous Wagner production - but could it ever work without Terfel? Here's one shot we didn't get to use of his Proms performance, where he got a little more tired towards the end, but that's understandable, given the cameras, the heat and the emotional demands of the occasion. The snapper is musical photographer of the year Chris Christodoulou (just look at his Proms gallery of conductors and tell me anyone catches the mood better). 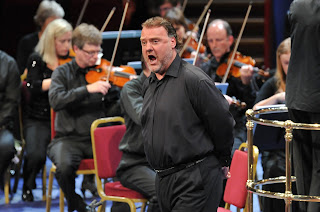 Which leads me finally to Ideal Opera Production of The Future (for it can't be thrown together in the next few seasons). That would have to feature Bryn as Jupiter and Anne Schwanewilms as his beloved mortal in Strauss's Die Liebe der Danae. Those two are essential; to stage it, take your pick between Jones, Robert Carsen or David McVicar on top form; to conduct it, Fabio Luisi or Antonio Pappano. Some hope, but I can dream, can't I? Happy New Year!
Posted by David at 12:30

I happen to like Tannhauser very much indeed in spite of the jarring stylistic juxtapositions in the Paris (my preferred) version. Wagner himself, of course, knew that he hadn't resolved Tannhauser and was apparently think of having at it again before his death.