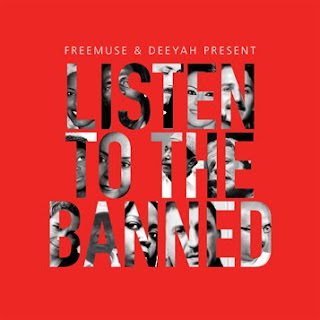 Or rather 'Slushay!', the title of an early revolutionary song used in the atmospheric first movement of Shostakovich's Eleventh Symphony. Its text was crucial to the composer, beginning 'the autumn night is as black as treason, black as the tyrant's conscience'. 'Listen to the Banned' is a collection of tracks by artists around the world whose free expression has been curtailed by censorship. It's been very carefully assembled by the multitalented Deeyah, born in Norway of Punjabi/Pashtun parents.

It's better than I could have hoped, since many of the artists represented aren't merely giving us plain protest songs. Most are superb and refined musicians, starting with Iranian singer Mahsa Vahdat. 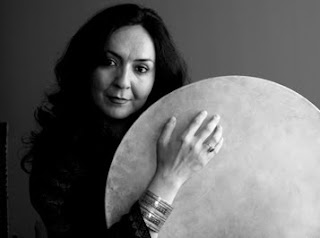 She takes me back to our Christmas day in Isfahan some years ago, when our hotelier invited us to his home and gave us a concert featuring his teenage son, a superb player of that weird and wonderful big drum with jingles the daf (we have one sitting here at home, a handsome beast; I think that's what Mahsa is holding in the above photo), and his wife, a first-class singer who, like Mahsa and many others, can't perform in public except in the company of a male singer.

I suppose it's because I have a special, if unversed, affection for middle-eastern artistry that I love the subtle art of Afghanistan's Farhad Darya, Lebanon's Marcel Khalife and the Israeli Palestinian Kamilya Jubran. But the marimba/mbira accompaniment to the song of Zimbabwe's Chiwoniso Maraire is enchanting too. And there's a real note of exuberant protest in the number 'to freedom' Uighur Kurah Sultan composed while in prison under Chinese orders (sadly he died in 2006). 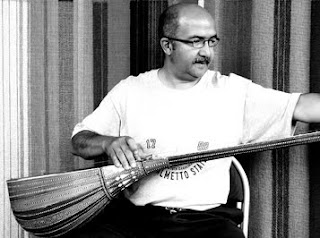 I especially like the segue from Sultan into the solo voice of the Alevit Kurd Ferhat Tunc.

One quibble, the usual when it comes to the loose title of 'world music'. It's not enough just to have a paragraph on the artists, however handsomely produced the booklet; we need texts and translations of all the songs. But this is a good 'beat the Xmas mush' present: read about it here and buy it on Amazon; you'll be promoting the work of Freemuse, disseminating freedom of song throughout the world.

And you can help another deserving cause make it to Xmas slot no. 1 (though sadly the X Factor winner is no doubt the firm favourite; to paraphrase George Bernard Shaw on inferior French farce, 'ten million teenage girls can't be right'). I like the subversive idea of a specially recorded Cage 4'33, but I also like this, not exactly as music, but the idea and the film are good. You'll need to click again on the screen once it's started to get the full YouTube picture.

And all power to the students and lecturers who yesterday claimed public spaces to fight back with classes and speeches, not brickbats. Hope they manage the same today. How proud I was of Goldsmiths forces last night at Noelle's memorial concert for flinging out Prokofiev's quasi-revolutionary 1917/18 incantation Seven, they are seven so superbly. They'll need a bit of that eloquent, focused fire for their protests. More on the superlatively moving and engaging concert when I get some pictures through.
Posted by David at 10:02

No one understands macro-economics. But one can say that the Coalition's policies are logically coherent and might well be the right ones, and are therefore worthy of constructive criticism and not abuse as in the video.

The Labour Government's policies at the time of the economic crisis were logical (as being the opposite of the disastrous policies of the governments in the thirties) and seem to have been correct. But - necessary though they were - they exacerbated the longer term problems of overspending

Taking one central aspect of the matter, over the last twenty years spending on benefits has moved the UK to a position of having one of the largest percentages of households dependent on benefits in Europe. The drag on the economy is enormous - the costs, and the absence of positive contribution. What can be done to correct this? Hence the discussion of the benefits, and the superficial comment that the poorest are being targeted

And - stand by - it was Mrs Thatcher, who put the UK economy into the most marvellous state ( inherited by Mr Blair) who was of the opinion that benefits could hardly ever be cut, and for political reasons( though one could try to stop them going up outside the cases where they are justified). There might be many who did not deserve to be paid to stay at home, but the political focus would always be on those really hit by misfortune, and the political classes would always scream about those. This is a remark directly relevant to the present controversy, but of course not much solace to the Government trying to get things back into order