The year of reading Ulysses 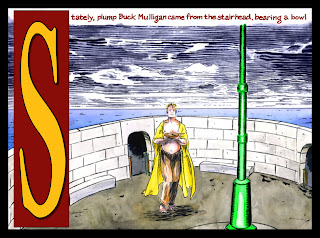 I must have cast my eyes over those opening words at least a dozen times (opening of the 'Telemachus' chapter as illustrated by Robert Berry courtesy of the excellent ulyssesseen website. Or rather, courtesy assumed, as they adopted one of my pix in their blog section, so I'm assuming mutual fair use). But only this year did I get to the end with, if not exactly full understanding, an awed appreciation of what Joyce was trying to do, the breadth and humour of his references, the ephiphanic attitude to the everyday.

Much of what I felt was neatly summed up in Declan Kiberd's Ulysses and Us: The Art of Everyday Living (Faber), which adopts the Bryan Magee approach of explaining the complicated in simple, direct language. Kibberd's basic premise is that Ulysses follows the great traditions of the Odyssey, the New Testament, Dante's Divine Comedy and Hamlet, as 'wisdom literature' - the wisdom reposing mostly in the everyday living of Leopold Bloom rather than the thickety consciousness of Stephen Dedalus. Of course it doesn't make us feel better to know that the third episode, getting inside young Stephen's head, is precisely the one at which most readers give up because it's so knotty, and is supposed to be. 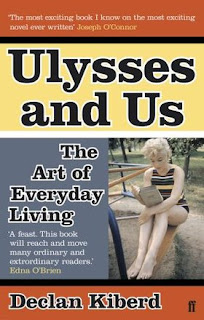 Kiberd sometimes seems to lose his way, and his style: why does 'Singing', on the Sirens instalment, read so badly? But I like his opposition to the navel-gazing academic approach, which is why I gave up fairly soon on Richard Ellman's Ulysses on the Liffey.

Anyway, life's too short to read piles of secondary literature. And I don't think I've ever had a more rewarding year in terms of discoveries. It began with Hilary Mantel - J's reading Wolf Hall was the lynchpin, but I started with Beyond Black in January and only worked my way through to the historical novels much later. Very much on a par with them is the Norfolk/Africa family saga A Change of Climate. I've only got Eight Months on Ghazzah Street still to go, but I've been steeling myself to feeling robust when I read it.

Which is a bit rich bearing in mind that I've been steeped in misery lit for the past six weeks. Yet never was there a better saying than the epigraph to Dostoyevsky's From the House of the Dead, 'in every human being a spark of God'. Clearly not every, as Hans Fallada's Alone in Berlin so hideously demonstrated*. But it only needs some to make it worth going on living. 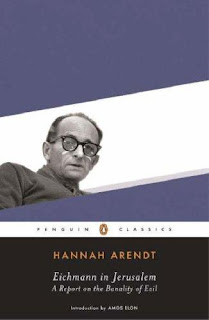 No-one puts that better than the steely-brilliant Hannah Arendt in Eichmann in Jerusalem: A Report on the Banality of Evil. She's been holding to account the testimony of a German army physician on the killing of Jews in Sevastopol. He points out that totalitarianism's skill in 'disappearing' people makes a visible protest useless. She counters:

It is true that totalitarian domination tried to establish holes of oblivion into which all deeds, good and evil, would disappear, but just as the Nazis' feverish attempt, from June, 1942, on, to erase all traces of massacres - through cremation, through burning in open pits, through the use of explosives and flame-throwers and bone-crushing machinery - were doomed to failure, so all efforts to let their opponents 'disappear in silent anonymity' were in vain. The holes of oblivion do not exist. Nothing human is perfect, and there are simply too many people in the world to make oblivion posssible. One man will always be left alive to tell the story. Hence, nothing can ever be 'practically useless', at least, not in the long run. It would be of great practical usefulness for Germany today [Arendt's account was first published in 1963], not merely for her prestige abroad but for her sadly confused inner condition, if there were more such stories to be told. For the lesson of such stories is simple and within everybody's grasp. Politically speaking, it is that under conditions of terror most people will comply but some people will not, just as the lesson of the countries to which the Final Solution was proposed is that 'it could happen' in most places but it did not happen everywhere. Humanly speaking, no more is required, and no more can reasonably be asked, for this planet to remain a place fit for human habitation.

I ought to quit while Arendt is so splendidly ahead, but I haven't finished with the peak of the year's reading. Margaret Atwood constantly points out in her futuristic nightmares the lesson that 'some people will not', but what makes Oryx and Crake a great book are the flights of stylistic fantasy, especially in the warped games played by the dystopic adolescents. Who else writes like this? Mantel, Martin Amis - name me others, please, whose manner doesn't seem flat after reading these supreme manipulators of the English language, and I'll be happy to read them. But if high stylishness isn't your metier as a novelist, then simplicity is always best. Which is why Tove Jansson's books for adults seem to translate so well, and why of all this year's novels, The Summer Book remains for me absolutely of the essence. 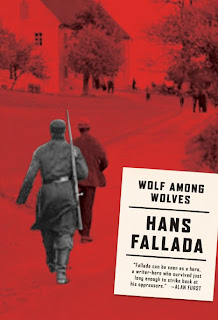 I'm now a third of the way through another Fallada masterpiece, Wolf among Wolves, a panorama of German life in the big inflation of 1923, and I'm looking forward to more thrillers and detective stories from Robert Littell and Ian Rankin, but I know it's La Jansson to whom I'll return for rooting.

*BTW, if anyone's still interested in the upshot of that A&E story, I went back to the Harrow hospital for the verdict on whether I needed an op or not and - the nice but clearly embarrassed specialist told me the CT scan hadn't been sent to him as promised, nor could it be obtained over the net on the spot. A waste of both our times. But he thinks a) it's pretty sure the damage is merely cosmetic and b) they need to do a much more detailed CT scan to make sure. And so it rolls on in to late January.
Posted by David at 10:53

One of the many joys of being "retired" (in which state I am busier than ever, including being co-librettist of an opera premiering in Boston next May) is that I get to read so much of what I have always wanted to read. But I find the more I read, the higher the "to be read" pile grows. When I die (or am killed Alkan-like by the pile falling on me) the used book merchants will inherit an eclectic treasure.

Well I, for one, am very glad to hear that about the eye/fracture. Fingers crossed for the January scan.