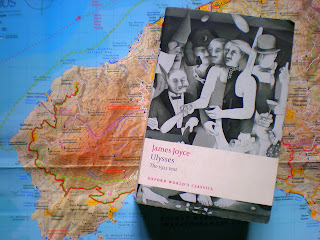 The year in which we coincidentally visited three of James Joyce's cities - Dublin, Trieste and Zurich - had to see the end of my odyssey through Ulysses. I wouldn't be defeated as I had been nearly thirty years ago, inter-railing to Italy, when I must have reached about the two-thirds mark but remember nothing except the phrase 'agenbite of inwit'.

Once I'd resolved to read an 'episode' a day in perfect holiday circumstances, with the aid of Jeri Johnson's commentary to the Oxford reprint of the original 1922 edition, and found I could do it in Switzerland, there was no stopping me. Especially as this time I found so much of it engaging, human and very funny. Yet the conclusion of that particular trip brought a full stop to concentrated reading: too much hurly-burly here in London to find the right space. So having been engrossed by Leopold Bloom's reasoned altercations with Fenian bigotry in 'Cyclops', it wasn't until I was installed on the balcony of our Potami retreat in Samos that I reached Sandymount Strand at 8pm and Bloom's onanistic viewing of lame, would-be-genteel Gerty MacDowell.

Since JJ always starts each narrative from an exhausting new stylistic point of view, reading Ulysses is never calm sailing. The journey through the history of Eng Lit in Holles Street Maternity Hospital is bewildering; I found I sometimes just had to let my mind go slack over the flow of words. Johnson has a point here: you worry that you can't see the wood for the trees, but the trees are the wood. And then I thought I was going to relish the dream-drama of 'Circe', but found it just went on and on - which is, I suppose, nightmarishly the point.

Reaching the final harbour was easier, and again it's no doubt Joyce's intention that after the Goethean brothel Walpurgisnacht the often amusing dialogues in the cabbies' shelter should come as a breath of fresher air. And then we go to the other extreme with the didactic lunacy of 'Ithaca'. Fortunately there's raunchy, Rabelaisian Molly with her filthy talk and her forgiving view of humanity to provide a surprise feminine coda. Which I finally reached on the plane from Athens to London. How strange that we were flying over beloved Trieste 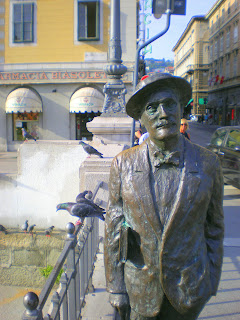 and Paris; that the end-date was palindromic (01/11/10); and that I finished my reading at 10.10pm. And then, onwards to Bulgakov, the engrossing family chronicle of Ludmila Ulitskaya's Medea and Her Children, and more Moominmadness at bedtime.

My thanks to the quietly inspirational Fritz Senn in Zurich for keeping me on the Joycean road.
Posted by David at 10:11