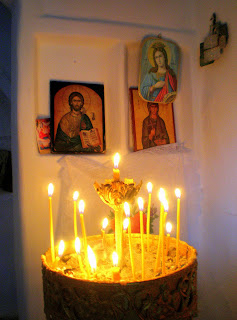 I know it's on All Souls' Day that the devout honour their dead, but we found ourselves lighting candles unbidden and unanticipated on a translucent Hallowe'en day in Samos, where for a blissful week I've been away from internet and from all music bar the mournful Greek songs interlaced with frothy Europop filling the bars and restaurants.

Leaving our eyrie on the north side of the island, which will have to wait until another day for its paean, we drove to the southern slopes of Mount Kerkis, at 1434m the second highest peak on any of the islands (Samothraki boasts the highest), and began the afternoon with a dip and a bask at Limnionas. 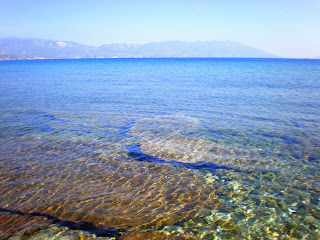 Here, again unanticipated, the spookiness began. I found a playing card, face down, on the beach. I held it up and later found out that our Polish friend had guessed its identity - the Ace of Spades. Betokening, we hope, not death but the day of the dead. Anyway, we drove with special care around the unfenced hairpin bends of Samos's empty western road, climbing to dramatic heights among pine forests (about 20 per cent of Samos's famous greenery burnt in 2000, but not here, nor in our north-western corner). It's a pity we pre-empted the beaches and monastery of Ioannis Eleimonas, recommended by resident German artist and neighbour Peter - we'd intended to make a second swimming stop later in the day but his other suggestion, the cave churches above Kallithea, took us longer than we'd expected.

That was not least because we parked early on the rough track up to Aghia Paraskevi and walked for an hour and a half before stopping to have a picnic. But the air was so fresh, and the views so spectacularly clear, that we could hardly regret taking our time. On our right was the ridge of Kerkis 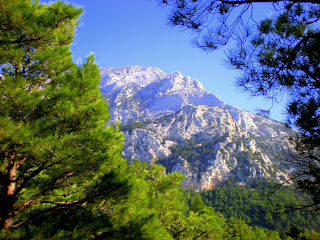 and westwards, out to sea, the silhouette of Ikaria, a balder island with strikingly independent and sociable inhabitants, Peter told us. 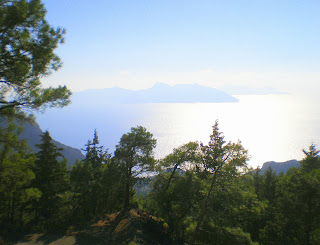 Picnic was served at 4pm among the pines, and then we paid our homage to Saint Paraskevi at her tiny chapel, poetically sited with an enormous plane tree in front of it. Touching how most of these holy places, filled with icons, are left open, quite unlike the painted churches of Cyprus. 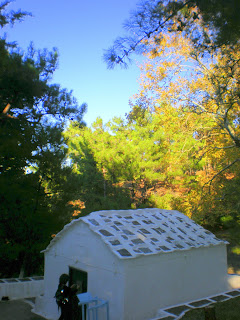 I can find out nothing about it, but I did read up concerning the saint, who went through the usual tortures unscarred in Asia Minor and, her persecuting Emperor having been blinded, restored his sight and converted him on the spot (it still didn't save her from ultimate martyrdom in Rome). And so, like Saint Lucy but with a different backstory, the eyes are her symbol, and dozens of votive offerings hung both over her picture 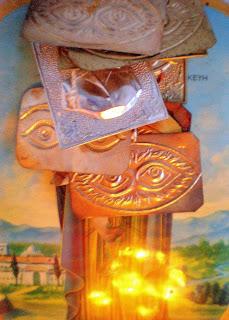 and on a hook to the left. 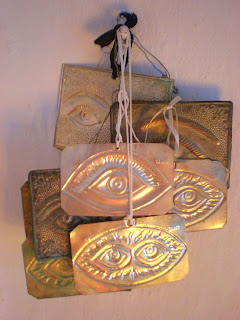 This is where we realised we were going to honour our dead on the eve, and so I lit a couple of candles to symbolise the most recent major loss (Noelle earlier this year) and my earliest (dad back in 1977).

Our destination, however, still lay ahead, up a steep rocky path marked by crosses: the church-in-the-rock of Panaghia Makrini at about 800 metres. 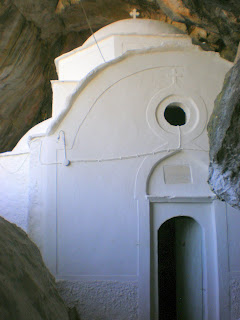 Again, documentation is scant other than the fact that it was founded in 800 by one of the many hermits who lived in caves on Mount Kerkis, and that its wall paintings are probably 14th century. We knew nothing about them when we arrived, so it was with a certain wonder that we took our lit tapers into the pitch-black sanctuary and found faces on the wall. Christ emerged in candlelight: 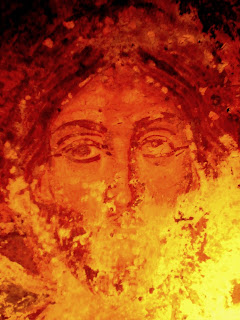 followed by disciples and prophets 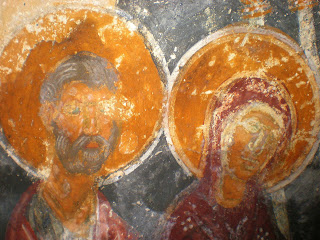 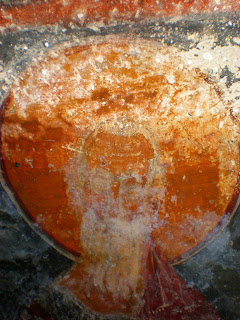 Around the arches are spotted beasts, birds and fish. 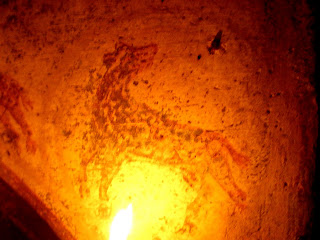 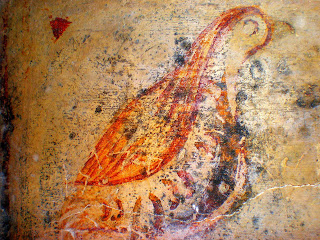 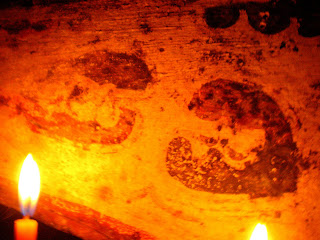 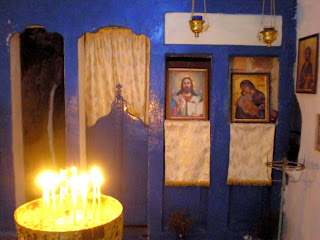 and, walking around the cave, 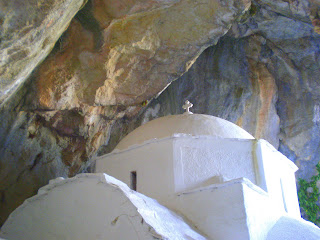 had a bit of a shock when we found an open grave with skull and bones. Peter later confirmed that it hadn't been plundered but had always been like this. 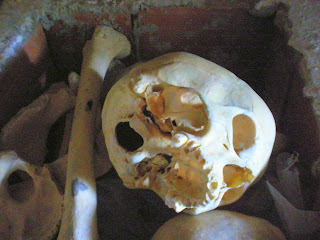 And so in concern, more practical than superstitious, for the failing light, we made our way quickly down the mountainside 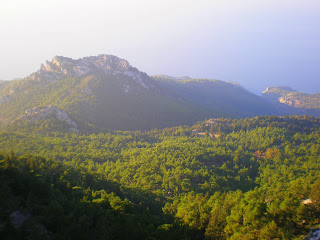 and arrived at the car just as Ikaria glowed in the sunset. 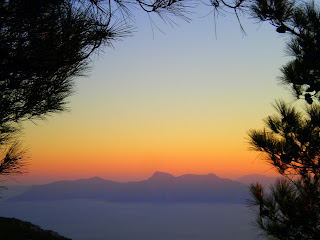 We hadn't seen a living soul all afternoon.

Was there any music in my head to all this? Oddly, yes - I discovered that what I was humming happened to be Marfa's song from Musorgsky's Khovanshchina, and a quick wordcheck along the lines recommended by Freud and Reik confirmed that the words of the folk melody's fifth verse were the cause:

Like candles of God
We shall burn together,
Along with our brethren in the flames,
And our souls shall rise through smoke and fire.

Admittedly Marfa is predicting the Wacko-like self-annihilation of the Old Believers, but the music is serene and glowing, and that's how my agnostic self felt as I lit the candles. Here's the great Irina Arkhipova at the Bolshoy in 1989 - another memorial tribute, because she was the favourite singer of my dear Russian friend Martin Zam, who died in his late nineties. As the scene continues, you also see another immortal, Yevgeny Nesterenko, as Dosifey.

As always I am green with envy but none the less pleasantly sated with your words, images and sounds!

The MET will bring back its
terrific production of Khovanshchina next season after too long an absence. Olga Borodina and New York's brand new favorite "Russian bass", Rene Pape will be in the cast.

I so envy your leisurely progress through the Greek Islands -- I went on the standard four day cruise with every on-shore option that was offered but you are managing the byways and exploring wonderful things!

Well, Will, I reckon that's one part in which Olga can still cut the mustard. I toyed between her Marfa's Song and Arkhipova's but really, despite the better picture for Borodina, Irina proved unsurpassable.

I count myself lucky, all the same, to have seen both Borodina and Diadkova in the time-honoured Kirov/Mariinsky production. Have to admit, though, that bits of Khov can be a mighty bore if not given razor-sharp delivery and direction.

What a beautiful thing to wake up to. I feel as if I've taken a jaunt to Greece. Your words and photos are exquisite. And to have that experience in that magnificent place without seeing another person all day? A treat indeed. Gracias, senor.

And thank you, too, BAB, for alerting me so eloquently to the horror of the Tea Party folk in action. I did watch that film, but the evil taste it left was slightly sweetened by seeing the Parkinson's protester's eloquent answer. Think I'll put them both up here in due course because they make things all too clear: bad vs good = ugly.

Anyway, as I said, it's good to have pockets of US intelligence in the blogosphere like yourself, Will and Elizabeth. I do still think that Obama is the decent heart of America - but it's so quickly being swamped.