People who live in glass houses 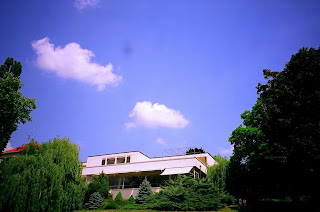 'See what he is suggesting? The house will be sort of hung from the first storey, here. Do you see? Downwards into the garden. The bedrooms and bathrooms on the entrance floor and then the living room below. Huge windows. Plate glass. I mean, the fellow hasn't really bothered with walls. Just glass.' His tone is one of amazement and excitement, as though he has just been the witness of a natural phenomenon that you see only once in a lifetime.

Thus the proud commissioner of the Landauer House in Simon Mawer's The Glass Room, aka the Villa Tugendhat of Ludwig Mies van der Rohe in Brno, built in 1928-30 and surviving all the forced repossessions and governmental interventions to stay open, on select days, to select groups. We saw it a couple of years ago thanks to the enthusiasm of our Viennese architect friend Tommi and his partner Martha (subsequent travels around Moravia mixed Janacek territory with a trip to the big Bata complex at Zlin, though we didn't find the model houses Tommi was looking for). Everything is exactly as Mawer describes it, down to the use of rare tropical woods and the semi-translucent onyx wall which in the novel becomes the living room's last-minute, hugely expensive piece de resistance 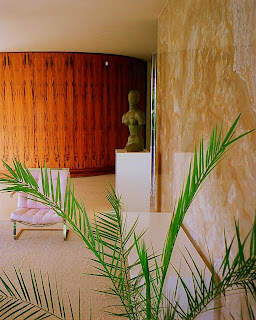 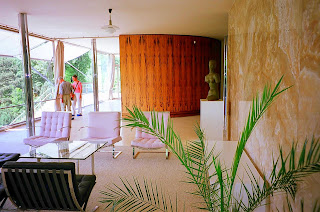 and the big glass windows which can be raised in the summer. 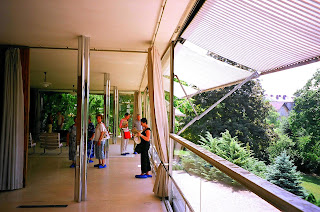 How far the book follows the real history of the occupants I can't say, though it stays fairly close to what happened to the house itself, whose original Jewish owners Fritz and Greta Tugendhat left in 1938 and never returned. I gather their descendants have applied for restitution to the Czech government, on the grounds that the Brno authorities failed to carry out the necessary repairs (though this is a UNESCO world heritage site). It did seem in a rather parlous state when we visited. Here, too, in 1992 'Czechia', as the Austrians so much more effectively call the Czech republic, was officially severed from Slovakia by the countries' respective leaders. 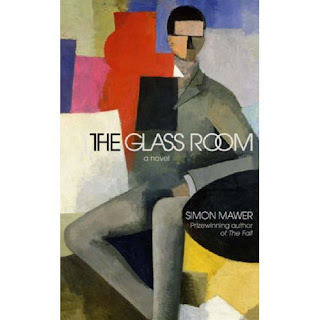 Mawer's novel is an admirable piece of imaginative reconstruction, verging on a pastiche of the German/East European epic. The characters, who sometimes feel a little like programmed creatures predestined to bonk each other, don't have the richness of those in a book which is closer in time to the dreadful topsy-turviness of the Second World War, Hans Fallada's Alone in Berlin (I'm halfway through, and I can hardly bear to put it down). Nor does The Glass Room boast the supreme style of the novel I read in between, Margaret Atwood's Oryx and Crake.

I sometimes feel Mawer has co-opted too much cultural information, interesting as it is for readers to learn about the tragically short life of Martinu's mistress Vitezslava Kapralova, a talented composer in her own right (as a disc loaned to me by Charles Mackerras richly demonstrated). But the house is the thing, and in his unusual quest to make it the abiding principal character, Mawer has lucidly succeeded. There's a fascinating Radio Prague interview with the author here.
Posted by David at 10:19

What a wonderful house. I should have sought it out when I was in Brno. I walk past Lubetkin's Finsbury Health Centre on my way to and from City University. Not so dramatic or elegant as the Mies, but interesting nonetheless. And delapidating rapidly, it seems to me.
http://www.e-architect.co.uk/images/jpgs/london/finsbury_health_centre_avanti300109.jpg

Which only goes to show we sometimes neglect buildings of interest close to home: I've never seen the Finsbury Health Centre, though I know the Highpoint blocks. Nor have I ever taken advantage of my barely-used National Trust pass to look inside the Goldfinger House in Hampstead.

Villa Tugendhat is indeed beautiful in its expensive attention to detail. The fact, as Mawer points out in interview, that there have been so many cheap imitations shouldn't detract from its achievement.

It has always seemed to me best for the Czech Republic to call itself Bohemia, as it was for centuries. The Moravians are always invoked, but they were under the crown of Bohemia for all those centuries as one of the three territories ( the third was Silesia, snaffled by Frederick the Great apart from a little bit which justifies Silesia as a part of the coat of arms of the present state)

No, the Moravians wouldn't like that one little bit. 'Czechia' is perfect.

But I must now attend to my superorbital fracture, as it turns out to be after four more hours in A&E. A kind word for that, perhaps, Sir David?

If you thought my reaction not to be positive enough let me assure you that it is very deep and I feel almost as if the iron post had hit me. It is the shock of these things - the sign that we are mortal and that mind is not independent of matter - which affects me the most

But I was cheered by several characters in A&E, so every cloud has a silver lining.