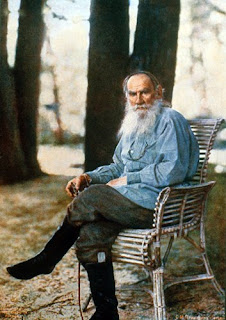 So the bass chorus almost shouts back at the soloist in Shostakovich's Thirteenth Symphony when he seeks to clarify the 'Tolstoy' Yevtushenko's poem places in the company of Shakespeare, Pasteur and Newton. It's ironic, of course, because the audience at the 1962 premiere, like the bass, would have been plagued by reminders of narrow careerist Alexey Tolstoy, who's more or less forgotten now.

Yet over here we haven't really been making as much of a fuss of either the great Lev/Leo's death-centenary nor Chekhov's 150th birthday as we should have done. Gospodi moy, I even forgot the actual day of the Tolstoy commemoration, 20 November, only to be reminded when the Radio 3 programme to which I contributed on Tolstoy and music, The Kreutzer Sonata, was finally aired on Saturday.

All I did was to speak to Katie Derham for about half an hour a few months back, and I didn't expect much to come out in the finished documentary, since there were such knowledgeable contributors as Prof Simon Morrison and the marvellous Dr Caryl Emerson, who appropriately had the last, most eloquent word. But the production team got the balance right, I think, KD really seemed to know her stuff and the programme covered most bases admirably (I suppose they had to go for Russian accents in the readings just to differentiate, though generally I don't like that false distinction) I guess we'd all covered some of the same ground, so it was fairly shared. You can hear the results for the next five days on the BBC iPlayer.

What do I know, anyway? Well, I know about Tolstoy's meetings with Taneyev, Tchaikovsky, Rimsky-Korsakov and Rachmaninov from one perspective or both. I've recently come to know the Kreutzer Sonata novella, too, and I guess it might have been one leap too far for the programme to bring Janacek into the picture too. And I've spent quite a bit of time looking at exactly what Prokofiev took for his selective scenes from War and Peace, which I still love beyond reason. That's to say both the opera and the novel, which is one of the few I'll still be re-reading every decade or so (maybe Ulysses will join the repeat list now, but Proust, no way). 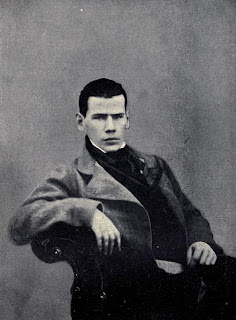 The above intrigued me as I was casting around for images: how seldom our impressions of great men - less so great women - are taken from their earlier years. We prefer bearded patriarchal Brahms, Tchaikovsky and Tolstoy to their younger selves. And Tolstoy was as singularly handsome in his youth as Musorgsky, who of course always winds up on the brink of delirium tremens shortly before his death in Repin's unforgettable portrayal, worth repeating here in the company of the composer's younger self (the older Tolstoy-as-peasant is, of course, another Repin, though the top image comes from that amazing supply of early Russian colour photographs). 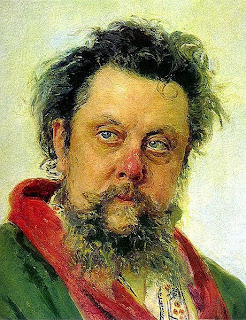 Let's shift some way north-west from Moscow and Yasnaya Polyana for two more major creators. I was pleased that others, including Jessica Duchen and top oboist Nick Daniel, were as delighted as I was to see movies taken at Sibelius's home in Jarvenpaa, which I tracked down via news of a recently published book of photos and linked to via The Arts Desk. It was also a timely reminder of one of the two most extraordinary connections with the past this year - my time at Ainola (the other, of course, was treading sacred Bergman territory on Faro). Because the films show a surprisingly mobile egghead in 1927 and 1945, the younger, Bohemian Sibelius in Gallen-Kallela's triptych, which I was so surprised to see on a wooden wall at Ainola, needs resurrecting here: 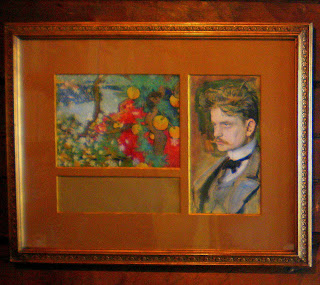 And finally, another singular portrayal; thanks to Simon for starting us off. August Strindberg has an antithetical sidekick in these very odd one-minute animations. I'm not quite sure which to show first, so let's have the one with the best punchline.

Yes the practice of showing great men in their old age is far too entrenched. I tried to get the people at Cambridge to show Darwin in his prime (rather than in old age as on the currency notes) in the documents covering his recent anniversary..... One crucial aspect is that in the age of beards the character is masked out - one cannot see much of the face itself. This may be one reason why women do not come so readily to mind as being too old when their pictures are reproduced - one can still see the features