How old is Emilia Marty? 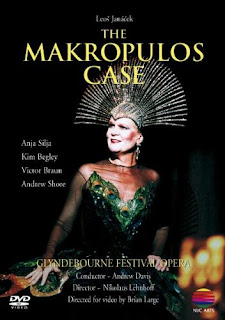 The poor old thing can barely remember herself - 337 she says, only to be worn down to a confused 327 under cross-examination (or is that a piece of last-minute vanity)? Well, it's perhaps a pedantic detail given the looking-glass-versus-realistic world of Janacek's opera The Makropulos Case (though I've always felt it was the biggest spoiler for this supposed thriller to lead with 'opera about a 337-year old woman's quest to regain the elixir of youth', but there's no avoiding it if you want people to come to performances).

One thing seems fixed: Elina Makropulos was born in 1585, took the potion invented by her father as court magician to Emperor Rudolf II in 1601 when she was 16, and never grew old - until 1922, when she comes to get a refresher dose. What a terrible abuse, the forcing of the experiment on to a young girl (and as Marty points out, it was a waste of time, because how could Rudolf know if she'd live for 300 years?). It's something David Alden's English National Opera production made a great deal of, and it accounted for Amanda Roocroft's portrayal of 'E.M.' as an infantilised prima donna. Which worked fine, and proved very moving until the final scene (photo by Neil Libbert). 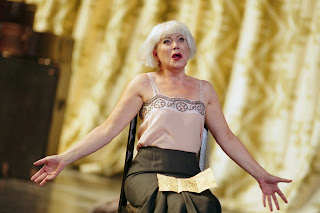 Where I think Alden copped out was in what some saw as a stunning surprise at the end. One thing I will say is that it's not what either Janacek or his astonishingly prophetic, modern source, the playwright Karel Capek, wanted. The potion has been touted round all the men and, in the play, debated by them from various angles - idealistic, hedonistic, eugenic - until they reject it. And then the mostly silent but always sympathetic young singer Krista takes the document - and burns it. A liberating gesture, surely, whether or not Marty dies at the end of the piece (in the play she simply laughs and says 'the end of immortality!' - curtain).*

Lehnhoff's Glyndebourne production got it right, I think, leaving the final scene as a confrontation between Marty and Krista, the only person who really reaches out to her in the entire opera. The City Lit students who've been following me through The Makropulos Case in our six Opera in Focus classes on Janacek's masterpiece were all bewitched by Anja Silja's iconic performance, and those who'd only seen the ENO production, much as they admired it, had to admit that this was on a whole different level. I like the fact, too, that the glorious Anja was supposed to be celebrating her 60th birthday when I finally interviewed her at Glyndebourne but - well, rumours were that actually that milestone had been passed a couple of years earlier...

I still count her Marty and Kostelnicka among the handful of greatest performances I've ever seen. I do wish I'd caught Soderstrom in the role on stage, though. On the terrific Decca recording with Mackerras conducting the Vienna Philharmonic, she inflects every line so meaningfully that I like to think you'd get the gist of it even without having the English translation to hand. 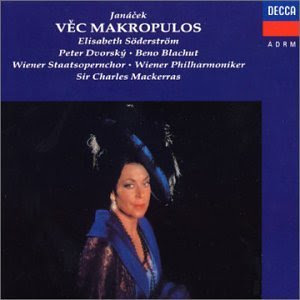 Now we need to campaign for a good, strong staging of the original drama (I'd also love to see Capek's R.U.R., the work that brought the word 'robot' into the language, and his Insect Play). The opera follows it almost slavishly for the first two acts, but its third is very much a condensation of Capek's acts three and four in which Janacek gives musical lyricism and liberation their head. I wept almost as much in the Arcola Theatre staging of Preissova's Jenufa, adapted by Timberlake Wertenbaker, as I always do in the opera, so surely this would be a worthwhile case? Capek's Makropulos Case is more brittle and even funnier than Janacek's, but how incredibly timely it remains. 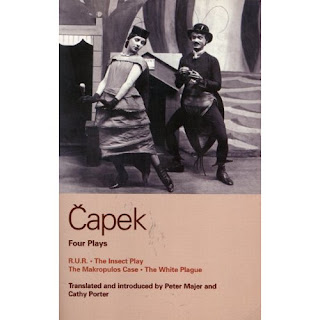 As I'm sure the scriptwriter for Robert Zemeckis's Hollywoood black comedy Death Becomes Her must have realised. I've watched the film three times now, and last Monday I played the students the scene in which Meryl Streep visits the mistress of the mysterious elixir (Isabella Rossellini, so camp). This was Streep doing masterly comedy way before The Devil Wears Prada and Mamma Mia! She and the equally wonderful Goldie Hawn, a little shall we say padded out in a very funny early scene, transcend any limitations the film might have, and Bruce Willis is amusing, too, as a plastic surgeon turned mortuary beautician. Here's a witty montage set to Marilyn's 'I wanna be loved by you', the number Streep's ageing star performs at the beginning of the film.

And now for something completely serious, but as joyous and as life affirming as Janacek's opera. The six-minute trailer - some trailer - I was originally showing has since been 'removed for copyright reasons', which seems a bit small minded. The documentary in question, 'Alice Dancing Under the Gallows' focuses on Alice Herz-Sommer, about to turn 107 on 26 November. Having survived Theresienstadt, this astonishingly optimistic woman loves life more than ever and remains fascinated by other people (she also still plays the piano amazingly well). I'm not saying that this is how it ought to have been for all holocaust survivors: we will never forget the ones who committed suicide so many decades later, or indeed my dear friend Trude Winik who suffered agonising guilt about the family she left behind in Vienna - they were sent to Treblinka - every day until she died, not to mention long bouts of depression. But this shows that affirmation is possible too.

What a rich counterpoint to Marty's tired 337-year-old declaration that the soul has died within her is Hertz-Sommer's 'only when we are old are we aware of the full beauty of life'. An example to everyone alive - not to say, 'this is how everyone ought to be', but 'this is how we could be if only we were good enough.'

*Alden isn't the only one to change the essential meaning and leave the recipe unburnt. I just read that at the end of Graham Vick's Mariinsky production, our heroine throws the piece of paper into the orchestra pit. I'm not saying these endings would be wrong if they provided an equally compelling alternative to Krista's setting light to the document, but I can't see that they do.
Posted by David at 10:10

It seems to me that NOT having the formula burnt takes away the crucial point of the opera. However noble one's character, and however much one knows that the play is fiction, one cannot help but be gripped by the idea of immortality - and then !! flash !! the hope has gone. A far more important point than whether Marty dies at that point or not.

I very much like the Elizabeth Soderstrom dress etc as Marty. It seems to me more redolent of her past and just what a non-aging woman would wear over the years ( at least the more recent ones)

I recently proposed Janacek as the greatest composer of the the twentieth century to An Authority not unconnected with Edinbrugh. No, he replied, one of the greatest of any century

Opera composer, I should have written.