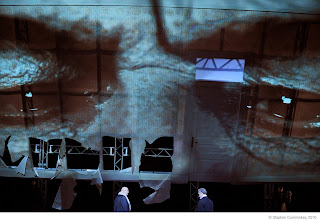 Felt a bit queasy about the big brother eyes in the ENO/Complicite Dog's Heart on Saturday (photo by Stephen Cummiskey). Not because of Graham Danby's unduly sinister party man, but because I was slightly nervous anticipating the visit to the Western Eye Hospital yesterday.

And with reason, as it turned out: after I'd been jammed up against a machine and had anaesthetic drops put in the eyes, and had lenses and sticks jammed in them, and had to swivel them every which way in front of bright lights, a big eye cheese decided I needed a torn retina lasered shut. In fact, I think this may have been a longer term problem dating from before the bike smash, from what an optician said a couple of years ago; but I'm glad to have had it sorted because a detached retina is no joke.

But from being told nothing about what they were doing to me, I then found out a bit too much: the specialist was going to burn around the tear. So the laser light show was accompanied by the odd shooting pain. Enough: it was over in fifteen minutes, the pink room returned to its normal colour and I stumbled out on to the Edgware Road with my eyes streaming.

By 4, I was fighting fit for the Adriana Lecouvreur class at the City Lit, and we had a happy time comparing versions of 'La dolcissima effigie' (Alagna, Kaufmann, Gigli, Corelli, Domingo and - tops - Aureliano Pertile). Then it was Judy time, and any initial scepticism about Tracie Bennett's impersonating the fundamentally inimitable were swept away by the second act of Peter Quilter's play End of the Rainbow, freshly transferred from Northampton to the Trafalgar Studios. Here's star Tracie as photographed by Peter Day. 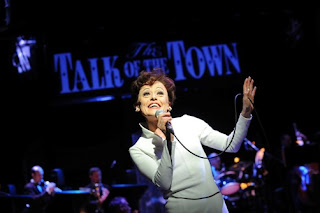 Read all about it in my Arts Desk review.

And finally, a real tonic. You may have heard about the hideous demise facing the Netherlands Broadcasting Music Centre (Muziekcentrum van de Omroep) and all its ensembles in Holland. I signed the petition against the government cuts along with thousands of others - you still may here - and was rewarded with this flashmob film in which the beleaguered players all gathered together for Bernstein's West Side Story mambo in a busy Rotterdam train station. Stick with it while the percussionists allow the other musicians to put themselves together.

Brought tears to my eyes - there's communication for you.
Posted by David at 11:39

Well as I recover from my surgery, I hope your eye saga will be resolved soon and you will have better sight. Though sometimes modern medicine is frightening.

Indeed - I think for yours you would have been out for the count, right? Which as a coward I'd rather be, even for major dental work, but of course that can't be done when eyes need keeping open...

Happy, restful convalescence, anyway. A shame it isn't the right time of year to sit in the Roman gardens.