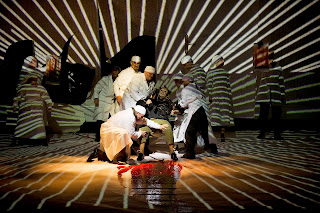 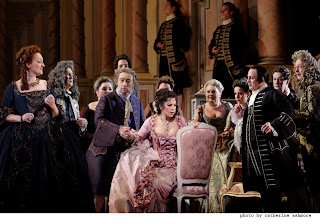 In this week of bizarrely contrasted operatic first nights, it should be the other way round, of course, but it doesn't sound so good. The diva is Cilea's Adriana Lecouvreur, purportedly a star vehicle for Angela Gheorghiu. Yet what we saw last night was a good company show, with plenty of quiet perceptiveness about the 18th century gulf between actors and aristocracy in David McVicar's production, beautifully designed by Charles Edwards. It certainly didn't make me regret taking the decision to spend four weeks on the opera with my City Lit students.

There's Gheorghiu's actress above in the Royal Opera photo by Catherine Ashmore, being attended to by Alessandro Corbelli's sympathetic theatre manager among others while Michaela Schuster's bitch princess looks on. You can read what I made of it in my Arts Desk review. 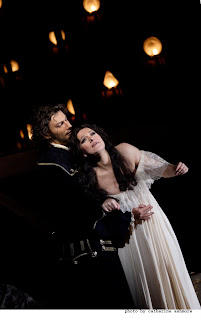 And what about Kaufmann? Well, I had the same reservations last night as I do about his new so-called verismo disc - that the top is infallibly secure, with its authentic Italianate sob, but the middle is a bit dark, baritonal and slightly in the throat, not quite the sunshine and roses I was hoping for in this rep. But as I wrote, it will be terrific for Lohengrin, Florestan and Siegmund. And eventually, let's hope, for Tristan and Siegfried. The boy has the looks, the musicality and probably the strength. 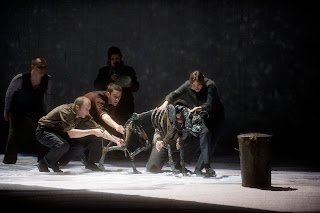 A rather different attention is being paid up top to poor old stray Sharik in the De Nederlandse Opera/Complicite premiere of A Dog's Heart earlier this year (both photos by Monika Rittershaus). I got to know Raskatov's score preparing an article for the ENO programme, and what an elaborate piece of clockwork it is: a bit like Prokofiev's collage technique, with no idea resting for more than a few pages, but quite a few repeats. Whether it'll hang together as good music theatre remains to be seen - and I will see tomorrow, since it's the first night at the Coli. Before that, I'm joining a conversation in the Apple Store on Covent Garden Piazza, chaired by Christopher Cook with the brothers McBurney and sundry performers as the other guests. It's free, so do come along at 6pm on Saturday.
Posted by David at 09:47

As always wish I could be there to hear you speak - but have to be satisfied with the pleasure of your writing alone.

The Adrianna sounds fascinating - we were to get a production here, not as stary or given values here as well-thought out I'm sure, but the current monetary situation meant it was cancelled.

Is the ROH production being broadcast at all?

It's going out live on Radio 3 on 4 December, 6.00pm. By then, Borodina will be singing the Princesse de Bouillon, though Angela will be back (Angeles Blancas Gulin sings Adriana on 27 November and 10 December).

I imagine that, as has happened before with an elegant hit of this sort, the BBC cameras will try and zoom in double quick too, though I don't yet know of any television plans. It would work a dream on DVD, though the close-up 'kissing' wouldn't take too much reality.

Stop press: Official Royal Opera reply, which suggested I knew it was being filmed in the first place (which I didn't):

'I can't give you dates/timings re DVD and cinema - but as soon as I have further details, I can get back to you. It won't be rushed
out immediately - so we would be looking at some point into the next year.'

So we should all be quite pleased with that.