Everything but the Elgins 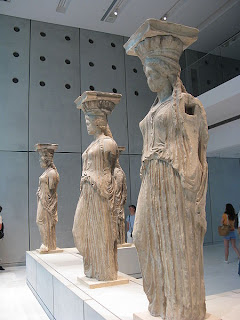 On our way out to Samos, we managed to spend two nights and a brilliant Sunday in Athens, courtesy of the gang there - Louise, Elena, Panayotis, Manos and Ariadne. A wonder of the world which wasn't ready on our last visit, en route to Kythera a couple of springs back, was the new Acropolis Museum, designed by Bernard Tschumi and Michalis Photiadis and opened last summer.

No photos were permitted inside, rightly enough, so I've taken the images here from a variety of Wikimedia sources. The Acropolis Museum itself could only offer an outside shot, so that wasn't much help. Nevertheless I'll do the courtesy of linking to its site.

Ten times the size of the old building, it makes a spectacular alignment with the Acropolis itself and an ascent upwards through archaeological time-layers, culminating in a top floor with telling gaps mostly replaced by plaster casts - the Parthenon friezes now in the British Museum, of course. Should we give them back? Tricky one. Athens has at last shown it can do them more than proud, but where would the BM be without them? 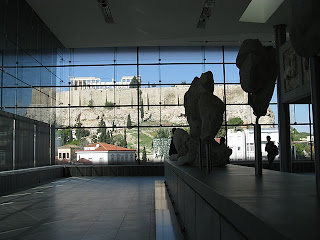 Anyway, what fascinated me on this visit was the glory of the archaic treasures, starting with the older pediment. It so draws the eye as you ascend the glass slope that you almost forget to look at the treasures to the right and left, which include wonders from the theatre-of-Dionysus zone. Amazing the traces of paint left on the pediment figures from the Hekatompedon, dating from around 570BC - especially fine in the case of the three-headed monster to the right (photo by Hans van der Bruggen). 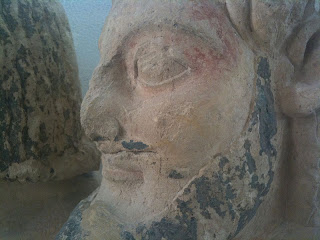 The votive offerings in the light-filled marble gallery to the right are all highlights, too, from the korai to the first perfect male form of the so-called Kritios Boy. This is evidently a photo from the old museum. 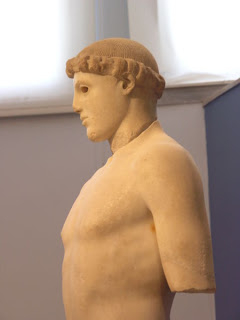 After these I detect decadence setting in, even in the golden age of Pericles: those famous original caryatids of the Erechtheion (pictured up top by Tilemahos Efthimides) seem a little heavy by comparison. But as with all the statues, you can walk right up to them - no cordons or glass get in the way. It's an amazing achievement and, had we but time before being whisked off to a taverna garden for a fabulous lunch, we might also have enjoyed the ace cafe attached.
Posted by David at 13:48

We saw the museum just prior to its opening and twice now since.... it really is spectacular. Where you able to fit in the Byzantine Museum? They were working on a new permanent installation the last time I was there - and given what a fool I am for the Byzantine stuff it had me close to tears for its intensity and beauty.

No, alas - a very late to bed (Louise cooks after midnight) meant a late rising, and a couple of hours for the Acropolis before the long lunch, the coffee, the gossip...next time. I also want to see Goulandris's Cycladic collection too, and spend more time in the Benaki.

I would agree to the return of the Elgin marbles, as they are such an intense part of the Greek view of themselves ( quite rightly) ...........

except that where does one stop? All over the world there are nations waiting to pounch on Western Europe and the USA. As planes now fly around the world so quickly, does it matter as much as it used to do, where objects are displayed?

Except that in this instance, the Greeks have bent over backwards to put the frieze, casts and all, in such alignment with the Parthenon itself that it's almost like having them in situ.

On the other hand, they can always give a sense with reproductions, whereas take away the Elgins from the British Museum, and the same couldn't work there.