A stroll around St Margaret Binsey - the name had a magical ring, not least from the elegy of Gerald Manley Hopkins for his 'aspens dear' by the Thames. As well I know from our management's arrogant despatch of five out of our 24 black poplars here, before the Tree Preservation Order we fought so hard to get could be officially applied,

But Hopkins was wrong when he wrote 'After-comers cannot guess the beauty been'. The 'beauty been' is very much present, now that a new generation of trees has grown up, around Port Meadow and the river here. 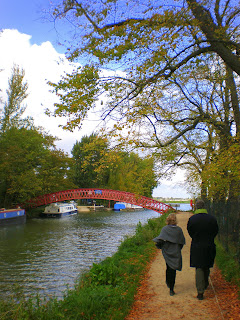 It's the same with Elgar lamenting the felling of the trees near Birchwood at the end of the Malvern Hills; another wood of conifers has since sprung up. But it does take at least 50 years for renewal.

In fact it's astonishing how much of the 'rural scene' is preserved for the good citizens of Oxford either side of the narrow North Oxford strip dictated by the Woodstock and Banbury Roads. I hadn't struck out on the west side until we were staying, some weekends ago now, with friends Juliette and Rory.

All we had to do was walk along the edge of the golf course behind their lodgings, only to find that we couldn't cross the canal by the school because the care-takers had raised the bridge for safety reasons, apparently.

Never mind - there was another way out to the Thames, though it meant coming back in to the Woodstock Road before we could hit the undoubtedly 'rural scene' of Port Meadow. 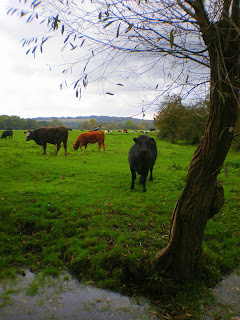 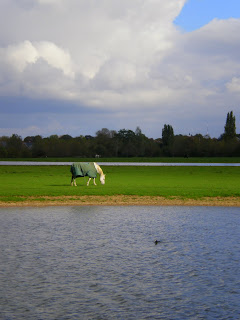 In half an hour we were strolling along the lane at Binsey, and talking to a rather malicious looking cat at one of the windows, as if we'd never been in the Oxford hurly-burly. 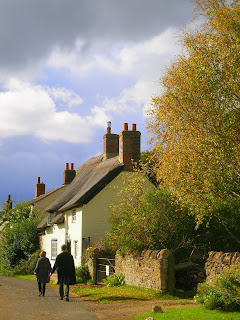 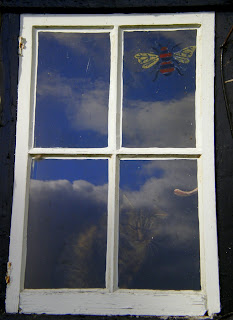 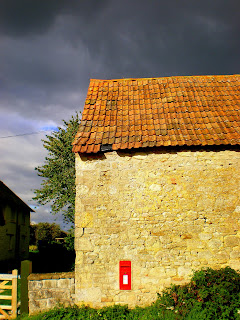 The church is even more secluded, at the end of the lane about half a mile from the village. Its gravestones still have a distinguished stonemason to keep the more recent ones beautiful 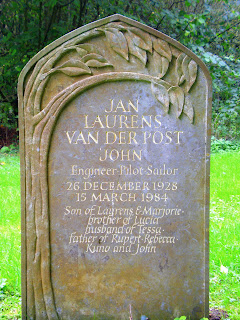 and nearby is St Margaret's Well, immortalised by Lewis Carroll as the 'treacle well' mentioned in the Mad Hatter's Tea Party as the home of three sisters. The overgrown well was cleared and properly shrined by Carroll's friend the Rev Thomas Prout when he became incumbent of the church. 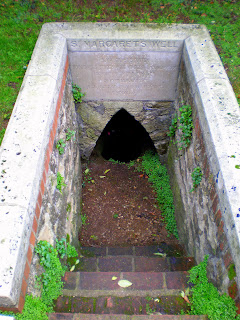 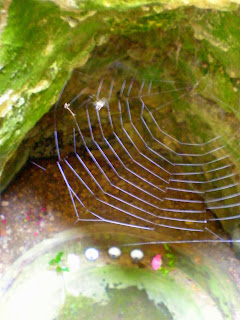 Only connect: the legend is that Oxford's patron saint St Frideswide was fleeing the advances of King Algar when, having been struck blind for his impiousness, he was sighted again thanks to her prayers here to St Margaret. How very similar to the tale of Aghia Paraskevi and her eye-symbol (and here was another afternoon where we had the spiritual place entirely to ourselves). 'Treacle', curiously, had the sense of a healing balm.

The church is left open, and Juliette immediately decided that this is where she and Rory would get married - by candlelight, it would have to be, unless it was an unusually bright day, since the interior is dark and has no electricity. It's simple, but boasts quite a few treasures, starting with detail on the arch of the 12th century south doorway. 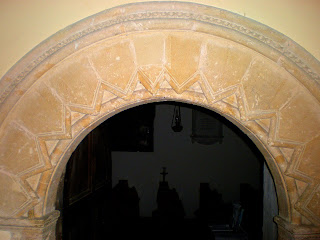 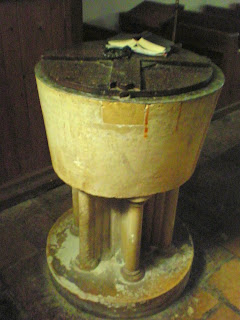 an achievement with Queen Anne's coat of arms, and the splendid 14th and 15th century glass worked into the east window. That's probably the head of St Margaret pictured up top, and here's what my Pevsner describes as 'the remains of a figure of Edward Grim and the knights from a large panel of the martyrdom of St Thomas Becket'. 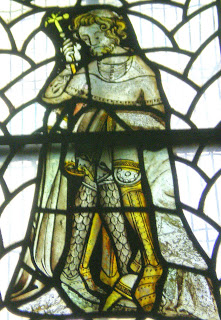 The simple attention to detail is touching. 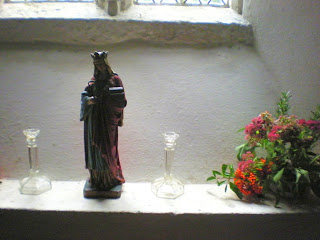 They even have a website for the Friends of Binsey, so clearly it's a much-loved little church.

Outside is the house once occupied by Alice Liddell's governess, supposedly the model for the Red Queen in Through the Looking Glass, and a farm with dwarf goats happily munching by the side of the church. 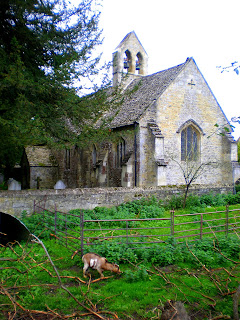 Though we'd been planning to get back, we were seduced by the nearby gastropub, The Perch, and the others came to join us for crepes and marshmallows which we roasted over braziers. With my obsession for round routes, I insisted we continued up the Thames* to Wolvercote, which took us past the ruins of Godstow Abbey - molto suggestivo, as the Italians would say - and the old bridges at Wolvercote itself. 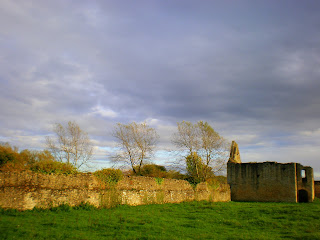 And if those weren't enough pleasures for a day, we got home in time for tea and then took a bus to New College for Evensong, on the strength of the programme I'd seen. It included Bruckner's Locus Iste, which eight of us sang at the wedding of Stephen Johnson and Kate Jones, plus two/three of the works we loved best during my years at All Saints' Banstead, the ones we always included on cathedral courses: Howells's Gloucester Service and Harris's Faire is the Heaven. Which sounded especially gorgeous as delivered in the special service by old boys joining the present team under Edward Higginbottom. Though I fancy our own 50-strong choir used to give 'those eternal burning Seraphim' more welly. Photo here courtesy of New College Choir, whose website includes a weekly webcast of a selected Evensong service. Sadly the one we heard isn't included. 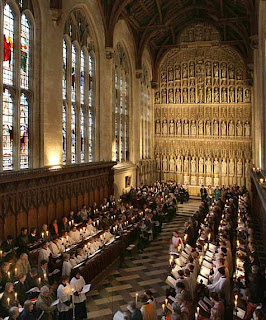 *past exactly the point, I since learned, where 'all in the golden afternoon' Dodgson started his Alice tales for the Liddell daughters after rowing them upstream.
Posted by David at 08:10

I mentioned the votive candles around the treacle well to our next door neighbours. They told us that there are a number of white witches living in Wolvercote who honour the well as a shrine to the water spirits living within.