Let's hear it for Hindemith 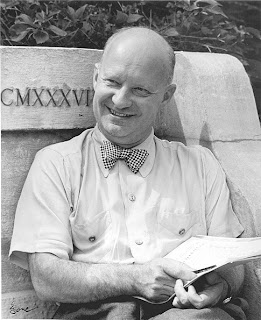 Took the BBCSO students through this coming Friday's programme to be conducted by the often electrifying Yan Pascal Tortelier. I always have so much to say about Musorgsky's Pictures at an Exhibition both in its piano original and its thousandfold arrangements that I knew I wouldn't have much time to talk about Hindemith's Concert Music for Brass and Strings. Yet it fascinated me all the same. We've got it all wrong about the mighty and humane German composer, labelled by his notorious claim for Gebrauchsmusik, 'utility music'.

Yes, he was prolific and yes, he saw it as his obligation to compose for the less familiar instruments, in which respect I suppose he was very much like his near-contemporary over the border, great Bohuslav Martinu (both, of course, ended up in America, where PH is pictured above in 1945). But even Martinu didn't write a chamber piece to showcase the heckelphone, that lowest member of the oboe family analogous to the bass oboe. Of course I would be fascinated by that as oboist manque, wouldn't I? It plays quite a part in the creepiness of Strauss's Salome, but Hindemith was surely the first major composer to bring it to the forefront. Here's the second movement of his quirkiest trio.

It was the opera Mathis der Maler which first hit me with an emotional force I hadn't expected (a brief firework in the Royal Opera's more adventurous programming some years back, directed by Sellars and conducted by Salonen). But I find plenty of melodic heart, too, among the counterpoint of Hindemith's Kammer- and Konzertmusiks. The students were hugely entertained both by the one that's popping up in tomorrow's programme and by Walton's jolly, unashamed ripoff in the finale of his First Symphony. I still treasure that fabulous Storgards programme in Helsinki twinning the two composers, and a couple of conductors I've spoken to think it would be a fascinating idea. So come on, Vladimir, stick your neck out and do it, please.

In the meantime, there's a film of Hindemith conducting on YouTube, but it can't be embedded. So here's the first movement of the Konzermusik in question from his 1950 Philharmonia recording. You can always go on to the second if you're hooked.

On a not unconnected brass note, I was sorry to hear that the doyen of orchestral trumpeters, Maurice Murphy, had died. I'll remember for ever the way he played the sassy blues solo of An American in Paris during Tilson Thomas's LSO series The Gershwin Years. I loved a comment referred to on one message board about Gabriel now being out of a job up there.

And news of distinguished musicians' deaths does seem to be coming thick and fast this year. Radio 3's In Tune just rang to tell me that the admirable Rudolf Barshai - viola-player (like Hindemith), arranger and conductor - has died at the age of 86. I'll be popping into the studio later*, and though I'm much taken up with Raskatov's opera A Dog's Heart at the moment, will squeeze in a hour to reflect on Barshai's Greatest Hits. Which will include his performances in the early Borodin Quartet, his string-orchestra transcriptions of Prokofiev's Visions fugitives and Shostakovich's Eighth String Quartet, and his Shostakovich symphonies cycle on Brilliant Classics (outstanding Fourth and Thirteenth). Is there no end to the wonders of YouTube? Someone's even put up the Prokofiev recording, which I have only in mono. This may not be the most soulful of the tracks, but it does highlight what the intended antiphons sound like in stereo:

*You can hear the chat with Sean Rafferty - before he and other presenters went on strike over the BBC pensions debacle - for the next six days on the BBC iPlayer. It's about 41 minutes into the programme.
Posted by David at 11:24

Opera Boston gives us our very first production ever of Cardillac starring the peerless baritone Sanford Sylvan in March. New York City Opera gave us Mathis a decade and a half or so ago. It's not much in the scheme of things but at least it happens every now and then.

For once, Will, you're better off across the pond - I've never had a chance to see Cardillac and it's one of the few operas I still think I've missed out on live. But isn't Sanford Sylvan getting on a bit now?

Born in 1953, he's fifty-seven now. I haven't heard him live in about five years but he was in great shape then. I would expect his solid technique and very smart choice of material to have kept him in a vocal condition that led him to accept the offer.