Black eye from the maestro guy? 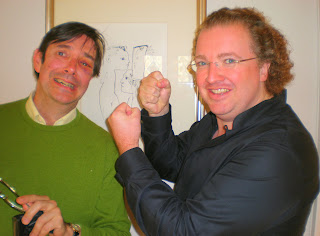 Hardly (for the true cause see the previous entry) - I've only ever written glowing things about Stéphane Denève, another of those already great conductors in place around the UK. And I went up to Scotland to interview him on the strength of admiring two Proms - a best-ever Debussy La Mer a couple of years ago, jampacked programme this September culminating in a super-refined Respighi Pines of Rome - in which he conducted 'his' Royal Scottish National Orchestra. I'd also been impressed by the wonders he achieved with Prokofiev's score in a DVD Love for Three Oranges and by the colours he wrought in a Philharmonia performance of Rimsky-Korsakov's Scheherazade - no casual showpiece performance, that.

So first to Edinburgh, where I had the huge pleasure of hearing the same team's Berlioz Symphonie fantastique in the company of my dear friend Ruth and godson Alexander, who was thrilled to bits to hear the complete work since he'd only played the just-to-be-decapitated clarinet in the 'March to the Scaffold'. And he sussed it all out about the idée fixe without knowing the whole programme. 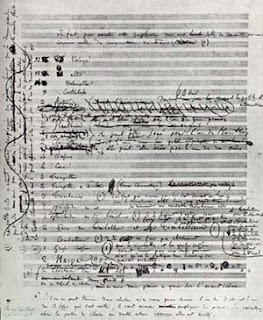 It was a fresh and daunting new take on the piece, which Denève has conducted twice before with the orchestra: you can read why in my Arts Desk review. And good to hear a first half working better in the dry acoustics of Glasgow's Royal Concert Hall than it had in the Usher. That questing spirit Frank Peter Zimmermann had returned to Szymanowski, though from what I understood him say over lunch, he'd usually prefer to play the rather so-so Second Violin Concerto alongside the more luminously intriguing First.

He was coming for lunch with the Denèves after our interview, which went swimmingly (good lord, 80 minutes to transcribe - that'll be a task). And I was due to be whisked off elsewhere by the RSNO's superbly efficient and friendly Communications Manager Danny Pollitt (who took these pix). But then I saw to my amazement that the other guest was my old friend Peter Schele whom I'd got to know from his Gothenburg Symphony Orchestra days (only connect - he fixed for me to join their Estonian tour with Neeme Järvi. And Neeme was, of course, the previous truly great conductor of the then-SNO).

So thanks to Peter, lunch invitation chez the Denèves in Pollockshields was generously extended. Though Swedish, Peter is more English than I am in outlook ('Shelley' to us): he was over for a feast of Coward and Wilde plays in London and to see these friends up north, and he comes from the same place in Sweden as Stephane's charming wife Åsa (the Denèves, by the way, have a two-and-a-half year old daughter, Alma, who is the most confidently bonny, serene child I think I've ever encountered - she welcomed us all and didn't seem to mind my bruiser. Then proceeded to count up to twenty in perfect French). Here's Åsa, having put Alma to bed for her afternoon nap, with conductor husband and their good pal Frank Peter: 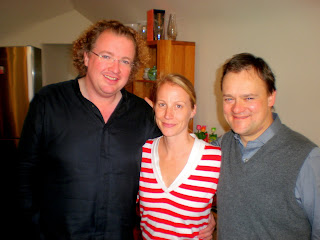 The shiner had, of course, to be photographed since several folk had been disconcerted by the shut-eye shot in the previous entry. And it's already made terrific progress. The RSNO's Danish assistant conductor Christian Kluxen, whom I met in the interval of the Glasgow concert, thought it was a birthmark...which is perhaps better than being mistaken for a 'fat drunk'*, as my dear mama commented on the earlier photo. Other reactions have ranged from '!!!!!' - I said I hoped at least one stood for sympathy - to nannyish reprimand. 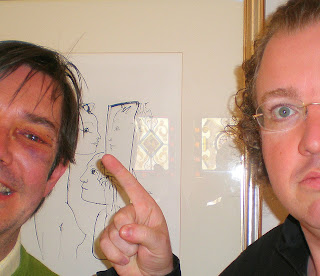 I'm still a bit wonky and the shakeup is rather long term, but I guess the squint will vanish over time.

Okay I was a touch nannyish - where as I know I should have shown more sympathy. I just hope the wonkiness disappears quickly and soon that shiner will give you the rakish air of a bruiser!

We had the Berlioz here last month and frankly Pappano made it all sound rather dreary. I think it takes a special conductor to work his way into any of Berlioz and it sounds like Denève has that touch.

No reproach - you did it very amusingly, and thank you for being among the few of the non-existent web 'community' to respond.

Ma foi, the fantastique dreary? I agree the first and third movements can drag if not really well handled. But there were no longueurs this weekend.

Sorry David, I meant to send a get-well message sooner, but it sounds as if you're doing well. Interested to hear about Deneve and the Scottish scene.
Your mention of Silja's 70th unbirthday reminded me of Anita Brookner's riposte 'my age is 49 and has been for the last few years'

Thanks, Paul - and you jogged me into a terrible admission: that was Anja's 60th birthday we were talking about at Glyndebourne. I think she's passed the 70 mark since...

Do hope things are better now for you, David. Loved your Mackerras review. Can't think why the Dvorak didn't come to life. Far too much waving of the arms? Amply made up for by the Vixen.

Exactly that - arm-waving, tad too much posturing. Tho' it's not a Dvorak symphony that quite does it for me, except for a handful of lyrical moments. Jiri did as good as job as I think I'll ever hear with the BBCSO at the Barbican earlier this season.

From which I gather you were there, Roger, so do come up and say hello if you spot me at another concert.

David, I've always liked the LSO/Monteux performance of Dvorak 7. He gives it real coherence. And I much enjoyed Ivan Fischer and his Festive Budapesters with it at Usher Hall a couple of years ago. Were you there? Are you going to Seraglio at QEH? Tomorrow is Graham Vick's The Wedding in Brum.

Just been to Adriana Lecouvreur, Roger - very good, no more, no less. Didn't I hear Fischer do Dvorak 7 at the Proms, Kavakos in Bartok Second Violin Concerto first half (another piece I find problematic) You see, I can't really remember well - except for the fab, was it J Strauss, encore?

"London society is full of women of the highest birth who have, of their own free choice, remained thirty five for years. Lady Dumbleton is an instance in point. To my own knowledge she has been thirty five ever since she arrived at the age of forty, which was many years ago now"

I was at the RSNO Prom with Deneve this summer, and had a chance to say hello after the pre-Prom talk, to thank him for the times that I've seen him as guest conductor in America. In fact, he asked if I wanted anything in particular for him to conduct on his next visit, and I suggested Dutilleux. He immediately tossed back suggestions of either Metaboles or the First Symphony. I'd be happy with either.