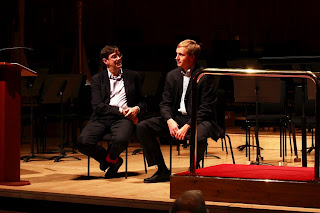 Or, 'Oh, what a surprise', and since the black eye is a thing of the past now, it must be something to do with my unexpected guest above. In brief, I was waiting in the Festival Hall wings on Wednesday to go on and do my stuff about Shostakovich 11, with nice snippets from Britten, Prokofiev, Stravinsky, the Red Army Choir and three of the main man's symphonies lined up, when along strolls the impending concert's conductor, Vasily Petrenko. Well, it was nice to meet him for the first time and all that, but as he hovered, it suddenly occurred to me: 'you're expecting to join me, aren't you?' And, having read a piece of information on his agent's list as a command to appear, he was.

An opportunity too good to miss, and worth the sacrifice of everything I'd prepared. So, quick thinking: two chairs, please, and a mike that would catch both of us. And we winged a half-hour interview, which I think went rather well, because Liverpool's great Russian import is the most relaxed and thoughtful of speakers. Out went the music examples, though I did still want to make the point that, though the symphony was written over 50 years ago and casts further back to the 1905 St Petersburg massacre, its significance continues, or did for two of my oldest and most treasured City Lit students before their respective deaths at the ages of 87 and 96. They may be gone now, but their memories live on in me. 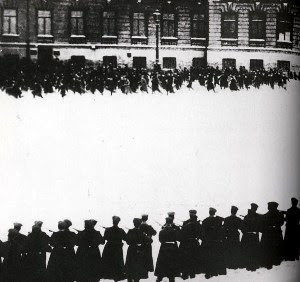 Martin Zam's father was there in Palace Square, and wondered why the history books never reported the events as they unfolded: chiefly, that the soldiers fired into the trees to try and disperse the crowds, unwittingly killing the children who were perched up there, which triggered the panic. And Trude Winik always loved Shostakovich's Eleventh best because she used to sing the revolutionary funeral song quoted by violas in the slow movement, 'Eternal Memory' ('Unsterbliche Opfer' to Trude), in red Vienna's Socialist Youth Movement during the 1920s. So when I hear it, I always think of Trude, who lost her father in the First World War and the rest of her family to the camps of the Second World War.

Thanks to the LPO below for alerting me to the quick putting-up of the talk on its website as a podcast. As for yet another astonishing performance of a symphony I never used to care for, read about it in my Arts Desk review.

I asked the LPO's Alison Jones to snap me and VP together. The specs reflect because my non-reflective ones got smashed in the bike crash. 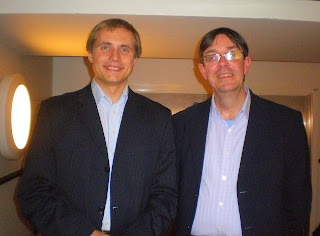 The top picture was taken, serendipitously, by a professional - photographer Mauro Fermariello, son of our adored Clara, who came along as my guest with mutual friend Cally. He was amused by my red socks, which he said would have got me lynched in conventional Italy - and certainly I hadn't worn them for effect, since I'd been expecting to stand behind a lectern. I took a look at Mauro's website, and there are treasurable images in every gallery. He gave me the green light to put up some of my favourites here. A dog basking in the sun at Pompeii: 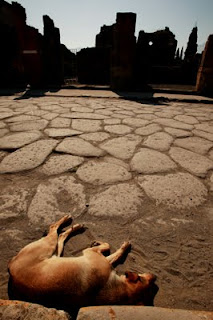 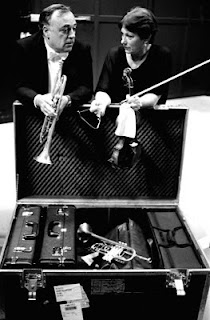 with trumpets to cue a quick mention for Martin Hurrell's visit to the students on Tuesday accompanied by partner Liz Burley, the BBCSO's fabulous orchestral pianist, celesta and (as she amusingly told us) virgin organist on a needs-must tour featuring Strauss's Also sprach Zarathustra. Martin played fluegelhorn and piccolo trumpet as well as the regular in a dazzling rendition of a piece by Aratunian.

And, last but by no means least, two of glorious Clara, nearly 85, under the heading 'Terza Eta'. 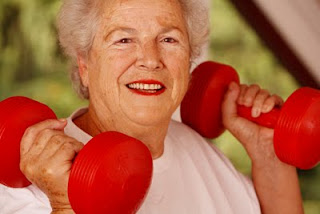 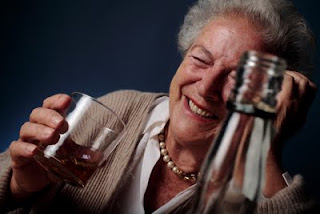 Auguri to our dama di grandezza in Napoli.
Posted by David at 10:30

What a wonderful blog, David. It's a pity I didn't get to the pre-concert talk, but I was going to Die Entfuhrung at the QEH that very night and saw your talk advertised. A bad clash, and I'd have liked to have heard you and Petrenko.

Thank you, too, for mentioning your late lamented pupils whose lives were so embedded in socio-cultural upheaval and the music that, at a creative level, processed and memorialised.

The pictures of Clara and the dog snoozing at Pompeii are splendid.

Thanks, Colin: likewise a clash - I'd love to have heard that Entfuhrung, and especially Sue Gritton. Such is London's musical life...for now.

As for Martin and Trude, well, as the Marschallin sings, time is a strange thing. The past comes to life so long as our memories, via the memories of others, are there to hold it.

David, please forgive : but this comment does not take away to any degree my sympathy for your collision with a post, but really, the ( apparent) reference cannot be ignored:

Hi David - many thanks for being so accommodating of the last-minute pre-concert talk changes. The podcast of this talk is now live:
www.lpo.org.uk/podcasts